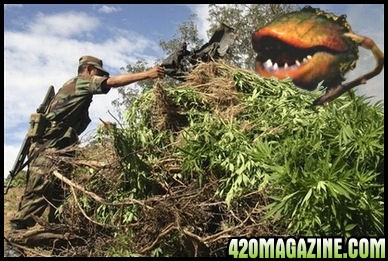 A source within the Ministry of Health, who wishes to remain anonymous, has provided documents and information to Cannabis Culture, describing how Canadian pot is to be grown for upcoming medical trials. The documents call for 185 kg (408 pounds) of pot to be grown in the first year, and double that amount for the second through fifth years.

The thirty-five page guideline document, with the weighty title, Draft Statement of Work for The Development of a Comprehensive Operation for the Cultivation and Fabrication of Marijuana in Canada, is still open to revisions. It includes proposals for how marijuana should be grown, processed and fabricated. Included in these guidelines is the potential to give a notorious pharmaceutical company exclusive rights for selling seeds to the budding medpot industry.

According to the document, "the acquisition of seed will be performed by Health Canada during the project initiation stage. The prime contractor can choose to provide their own seed so long as it is from a licit source."

Which presents a problem. How many licit seed sources exist? In North America the only licit source is the University of Mississippi. Concerns about the effectiveness of notoriously schwaggy U of M bud prompted Dr Kilby of the Community Research Initiative of Toronto to state that he would prefer clinical marijuana come from another source (see CC#22). It would seem that Health Canada recognized these concerns when it began looking for private contractors to do the job.

Yet will the bud really be any different than that produced by the University of Mississippi? Cannabis Culture's anonymous source within the ministry gave us the scoop.

"Scheduled labs around the country which are already growing marijuana are using seeds from the University of Mississippi," reported the official. "The genetics come from Monsanto."

Health Canada spokesperson Jeff Pender knew of the recent guidelines document that had been released, but denied knowledge of where the seeds will come from.

"Where would a potential grower get the seeds from?," repeated Pender when I asked him this question. "I'm not really sure. I guess… I could find out for you. I imagine growers could order seeds from the US."

Pender eventually suggested that the National Institute on Drug Abuse, which also gets its cannabis from the University of Mississippi, might be a source for contracted growers looking to buy licit seeds. If the unnamed source at the Ministry of Health is correct, all of these seeds would originally have come from Monsanto.

The US-based Monsanto corporation became infamous last year when the public discovered that the huge pharmaceutical company was responsible for producing Agent Orange during the Vietnam war, for producing and selling Roundup to be sprayed on South American villages, for experimenting with dangerous genetically modified foods, and – most recently – for creating the dreaded "terminator" seed.

Terminator seeds are genetically engineered to produce a plant that will not produce viable seed, meaning that growers would be forced to go back to Monsanto each year to buy more seed stock to replant. Governments and public alike became wary of the concept when it was discovered that the terminator seed could possibly cross the species barrier, possibly spreading infertility among the plant kingdom like a disease.

Cannabis seeds from Monsanto are almost definitely genetically engineered. Genetically engineered plants can be patented, and it is in Monsanto's best interest to hold a patent on any seed they sell. Seed patents ensure that companies like Monsanto can continue to profit from seeds from year to year, as farmers are legally bound to buy patented seeds from the patent holder rather than simply store them from the last year's crop.

Interestingly, low-potency pot of the kind produced by Monsanto seeds at the University of Mississippi is exactly the kind of product the Ministry of Health is asking for from contractors. The guidelines ask specifically for "standardized marijuana cigarettes with THC content of between 4% and 6% and weighing [about] 850 mg."

Which means the cigarettes to be used for clinical trials will be phatties containing over three-quarters of a gram of schwag bud each! These fat joints will deliver about twice the tar per dose as marijuana currently available from experienced growers, which reaches between 8-10% THC.

The Health Canada document seems concerned that smoking can cause harm, and promises to explore other methods soon after the initial trials are run. Yet the product they choose to use is guaranteed to maximize the risks and problems associated with smoking. Could it be that the Ministry of Health is creating its own excuse not to use smoking as a delivery method?

Our anonymous source within the ministry assures us that the government plans to eventually only allow the use of inhalers, similar to asthma inhalers.

"The inhaler gets rid of any small industry that might develop, by regulating the delivery system. The other idea that didn't go through was to develop a seed system that would allow cultivars from across Canada which would then be grandfathered. What this means is that once the cultivated varieties were tested they would be introduced just the same as if they had been genetically modified."

Gov'ts love to take something beautiful and make it completely ridiculous.

This has been discussed for some time, apparently.

http://www.mult-sclerosis.org/news/Dec1999/OttowaMedMJ.html
Marijuana, in its natural form, is one of the safest therapeutically active substances known to man.
By any measure of rational analysis marijuana can be safely used within a supervised routine of medical care.
FRANCIS L. YOUNG, DEA Administrative Law Judge​

GW Pharmaceuticals are doing some research on an Advanced Dispensing System (ADS) for Sativex. At this stage it is in the R&D stage, but it gives an idea of how far the company is advanced in marketing sativex in a way that would satisfy the US Government. I thought you might be interested in how medicines can and will be marketed in the future.

ADS is a groundbreaking technology and in October 2003 received the AiM Stock Exchange "Best Technology" Award. The ADS also provides a full audit trail for service providers and enables remote monitoring and control of the entire drug management process in real time. The technology provides a secure and tamper-proof means of dispensing drugs that can be applied to almost any drug in any dosage form. This is of special interest for drugs with potential for abuse and misuse or harm by inappropriate administration.

ADS has the potential to revolutionise the prescription and dispensing of drugs in such a way as to enhance safety, minimise diversion, provide greatly increased flexibility in prescribing patterns, permit the monitoring of a patient's progress remotely and the adaptation of prescribing regimes on a day by day basis as required.

By creating a full audit trail, ADS can provide information on natural patterns of usage of prescribed drugs in the community and manage the progress of the product pack throughout the entire supply chain. Physicians and pharmacists can monitor the progress of the patient as they consume their medication and receive warnings when events occur outside pre-defined limits. In addition, service providers at all levels can review their management information.

ADS comprises an intelligent device (which may be hand-held or fixed) that controls the dispensing of a range of drugs and dosage forms and communicate in real time utilising existing wireless telecommunication technologies. Identification/tagging technology can also be incorporated to enable a full monitoring capability.

Implementation of ADS can be via a number of routes, the principal ones being:

A fully integrated system that places the patient at the core and provides a secure, accountable and flexible route for the management of controlled drugs 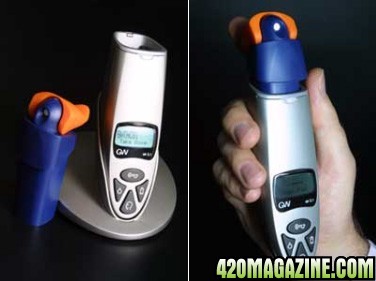 Submit your best photos to photos@420magazine.com for publication in 420 Magazine
S

Inhalers? What are we? A bunch of misbehaving children that will be bent to their wishes and follow along blindly like the sheep they wish us to be? We can not decide for ourselves as adults the best delivery of our medication? AND in the mean time, they will tell us who we may purchase our seeds from ... Monsanto cannabis seeds? With all we are learning about Monsanto and their genetic modifications in our food/ lives?
I guess no one should be surprised that this government has given rights to our Cannabis seeds to Monsanto, since the collective health of this great nation does not seem to be important to the Harper regime (or maybe the Harper government IS Monsanto?). This government is only interested in making sure that any move toward the end of prohibition is controlled directly by them, and their engineering modifications through Monsanto will ensure the results that they desire. Failure. And who cares how it will affect our lives to achieve that goal. We've seen what they are doing to our food. And now we know they are also doing it to our medicine. When is enough enough? Why are we allowing Harper to give us over to the wolves? And why are we blindly following along?
It's time to STOP REEFER MADNESS. We know it's all a lie. Take your health back into your own hands. Cannabis IS the answer....
T

Yeah... the thought of Monsanto introducing some hybrid beastly seed into the mix is cause for serious concern. Thank God we are having conversations like this, because the power elite are selfish and sinister enough to attempt something like that.
T

Yeah... the thought of Monsanto introducing some hybrid beastly seed into the mix is cause for serious concern. Thank God we are having conversations like this, because the power elite are selfish and sinister enough to attempt something like that.
When the likes of John McCain suggest that we should consider legalizing pot, it's time to be concerned.

The former Republican presidential nominee was quoted on the topic Thursday by journalist Tim Steller during a town hall meeting in Tuscon.

Medical marijuana has been legal in Arizona since 2010, but recreational use is still not.

A poll conducted in May found that 56% of state residents favored legalization of small amount of marijuana “for personal use,” while only 37% opposed the idea.

A group called Safer Arizona is now working on gathering signatures in order to put legalization on the ballet for 2014.

She spoke about using marijuana herself and the research she did that led her to come out “publicly in support of it.”

Monsanto are EVIL the whole idea behind home cultivation of cannabis is to try to get away from artificially genetically modified ingredients in medicine. Governments should be discouraging or specifically legislating AGAINST GM companies getting into the business not encouraging these poisoners.
J

GW are just as bad as Monsanto. Any artificially GM'd plant is bad for the environment and the consumer of that plant, only they know what genes they have introduced. If they could they would make it impossible for the medicine to be grown at home. They are trying to produce plants which produce non viable seed in order that all seed has to be bought from them and only licensed cultivators will be able to buy it. They have already tried this with some staple food crops. Thank GOD for the private seed banks and plant breeders.

K
Monsanto, Bayer, And The Push For Corporate Cannabis

K
The War On Weed Part II - Monsanto, Bayer, And The Push For Corporate Cannabis

Monsanto And Bayer Are Maneuvering To Take Over The Cannabis Industry