HELENA, Mont. (AP) – Medical marijuana advocates can begin gathering signatures in their attempt to suspend what they call a restrictive law passed by the 2011 Legislature.

The approval process took about six weeks, after the association filed paperwork on May 12.

The group's first task is to train the volunteers who will collect signatures, association spokeswoman Kate Cholewa told Lee Newspapers of Montana. Signature gatherers were expected to be on streets beginning this weekend.

Under the law passed by the Legislature and set to take effect Friday, medical marijuana providers will be barred from making a profit and limited to providing marijuana to just three patients. The new law also places additional checks on conditions for qualifying for the drug and on the doctors who certify medical marijuana patients.

The ballot measure will let voters decide if the new law should be overturned.

To qualify for the November 2012 ballot, the petition requires the signatures of 5 percent of registered voters in 34 of the 100 state House districts, and 5 percent of the total votes cast for governor in 2008, or at least 24,337 signatures.

To suspend the law until a statewide vote, backers must get the signatures of 15 percent of registered voters in 51 of the 100 House districts. That would amount to between 31,238 and 43,247 signatures, depending on which state House districts they use, according to the secretary of state's office.

The association must turn in the signatures to county election officials by Sept. 30.

The Montana Cannabis Industry Association also is awaiting a judge's decision on its legal challenge of the law. 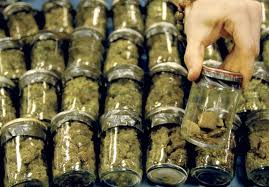