Every bride-to-be wants her wedding to be special. And trying to incorporate cannabis into your festivities is about as unique as it gets.

With the increasing popularity — and legality — of hemp and cannabis products, trend watchers are predicting that we'll start to see more of these elements in mainstream weddings.

From gowns crafted out of hemp to sprigs of marijuana plants in floral arrangements to offering adult guests not only alcohol, but also legal recreational marijuana products, brides are finding more ways to make cannabis a part of their special day.

One bride who went this direction last summer was Spokane native Teresa Foster, who started with the goal of wanting something environmentally friendly.

"At first I didn't even think about a hemp gown; it was more about doing away with the extra plates and cups that are used at receptions," she said. "We were at the age where we were going to several weddings every summer, and the excess garbage really turned me off having a big wedding."

So she searched for ways to make her event as eco-friendly as possible, including finding a gown made of natural hemp fibers, and designing a sustainable menu.

Foster and her husband Paul decided to get married in Colorado since that state was a little ahead in the overall acceptance of hemp and related products. They remain Colorado residents.

The couple used Teresa's mother's china instead of disposable tableware, which also added more of a personal touch, plus less waste.

"I think it made her very proud — if not a little more uptight that something might happen to it though," she said.

The couple made the food simpler to cut down on leftovers. Instead of a formal sit-down dinner, they offered multiple appetizers.

"Whatever wasn't eaten, which wasn't much, my sisters packaged up in recyclable containers and gave to guests who wanted to bring food home," she says. "After several hours of dancing and partaking, we had many takers."

Along with providing alcohol, the Fosters also chose to have a hemp and cannabis bar, where guests could enjoy hemp-infused drinks such as Hemplify, a beverage flavored with essential oils, and other non-psychoactive hemp plant ingredients. They also served THC-infused foods and elixirs to guests who enjoy partaking.

"We told our friends to feel free to bring their vape pens, since a lot of them prefer to party with cannabis rather than drink," she said. "We just wanted everyone to be as chilled and comfortable as possible."

The first step, however, was the dress. Foster wanted to go with a material that was environmentally safe and also know where the fabric came from. She chose a hemp-silk blend fabric gown processed without chemicals from the Hempist, an eco-friendly online retailer. Her mom enhanced it with pieces from her grandmother's wedding gown.

"I got married in August, so my comfort in the heat was essential," she said. "Hemp gowns are just as uniquely beautiful, not to mention comfortable and cool."

It's not hard for cannabis enthusiasts to show their love of the herb — and their special someones – with hemp gowns, infused drinks, vaping stations and pot-leaf bouquets.
The Knot.com, an online resource for brides-to-be, recently asked members how they felt about cannabis at weddings.

More than 67 percent of the 1,000 survey-takers voted "Yeah! I'd love to go to that wedding," whereas 22 percent voted "No! Drugs don't belong at weddings." The remaining 11 percent stated "I'm not for or against it."

Proponents say that, in places where weed is legal, pot's presence is no different than alcohol. Open bars are often a staple at weddings and some even have designated smoking sections.

However, before you invite your guests to smoke 'em if they've got 'em, make sure you're abiding by state and local laws.

Banquet permits allow temporary liquor sales, but cannabis is prohibited. Caterers also aren't allowed to provide cannabis-infused menus since this could be considered selling marijuana without a license, and event hosts/guests who want to provide marijuana to guests may quickly exceed their individual possession limits.

But even with the restrictions, which vary from state to state, the wedding industry is trying to offer more services and products.

"Every year there are more and more weddings where cannabis is incorporated," said Philip Wolf, CEO and co-founder of the Cannabis Wedding Expo, which holds annual bridal shows in San Francisco, Denver and Portland.

At Denver's first expo last year, Wolf said 35 companies offered hemp gowns and "420"-themed bouquets, plus infused catering and bud-tending services and plenty of other elements. It was so successful that 1,500 attendees and 75 companies participated at expos in the other cities last year, and twice that many at the 2017 expos. 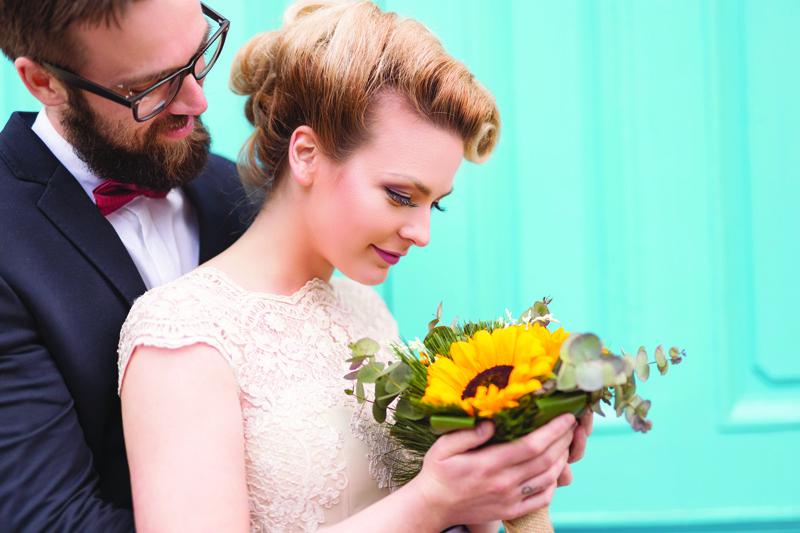 AZ: Phoenix Woman Who Used Hemp Oil On Son Will Get Foster-Care License

K
Colorado Cannabis Wedding Expo, For The Bride And Groom Who Like To Consume