There is an emerging trend in the marijuana industry in Colorado. An influx of women are running these businesses whether it's retail pot shops, manufacturing edible products infused with cannabis or working in testing labs. At this week's first-ever Colorado Cannabis Summit in Denver, the entire panel of local experts on safety and technology was made up of women. "I like to call them the marijuana mavens," said Brooke Gehring, a former mortgage banker who now owns four pot stores in Colorado. "It blows my mind, the incredible women I've met in this industry," said Genifer Murray, founder and CEO of CannLabs, a state-certified lab that tests the potency and safety of recreational pot products.

Murray said so many women have come into the industry that even though they often compete against each other, they're starting a group called Women Grow to mentor the next generation of female cannabis entrepreneurs. "My lab director's a woman, the director of my micro department is a woman, I have a couple other women lab techs, and I was so excited when I looked through resumes and there were a lot of women!" Why are women attracted to this industry? Could it be that they do well here because customers feel more comfortable with a woman behind the counter or running a business as marijuana tries to shake its shady image?

"I think it starts from the compassionate side of medical marijuana," said Jaime Lewis, chief operating officer of Good Chemistry. "We were able to take care of people and allow them an alternative way to medicate outside of pharmaceuticals and what their doctors were recommending for them." Lewis is a former professional chef from San Francisco who began making edible marijuana products for AIDS patients. Now she's in Colorado baking and selling full time for both medical and recreational consumers.

"I strongly believe there's that compassionate edge to it that attracts most women to the business," Lewis said.
There are no hard figures on how many "Mary Janes" there are in the legal retail marijuana business in Colorado, but at the Cannabis Summit, women made up at least a third of the attendees. Murray said it's still a male-dominated industry, but women can make inroads if they have the stomach for it. "To be in this industry, you have to be bulletproof," she said. "You have to be steel." You might say that about competing in any industry, but pot brings its own unique challenges. Colorado is, to an extent, making up the rules as it goes along for things like labeling, limits on THC in edibles, packaging and mandated security measures.

This remains an all-cash business as banks refuse to let pot businesses open accounts or get lines of credit. There's talk of creating a banking cooperative for the industry, but some fear that would be too risky. "I would be very scared to expose our money, and then, for any reason, be at risk for any type of laundering," Gehring said. Finally, even as some vendors begin pitching their services to the marijuana industry, others still shy away–and not even a woman's touch can change that. Murray said it took her 10 phone calls to find a waste management company willing to take her trash, and some scientific companies refuse to sell her lab equipment. "Shame on them," she said. "It's going to be a billion-dollar industry." 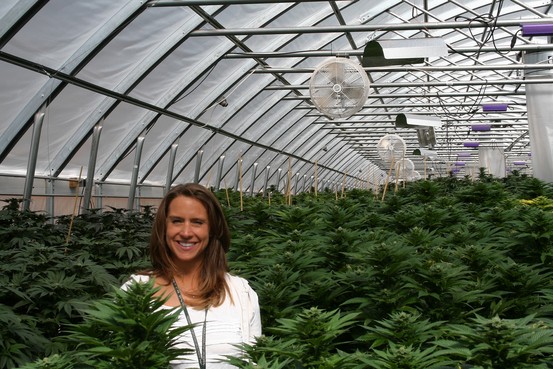 I appreciate Ms. Murray's willingness to answer testing questions from patients in other states, especially as this industry is so new.

Any women in Colorado willing to open a lab in our one-lab state (New Mexico)? Lots of rules and regulations here in New Mexico, including many that have just been proposed by the Department of Health (including increased testing), but I don't think that would make a woman hesitate to take advantage of what could be a great opportunity.