INTRODUCTION
MrSoul's hydro system is a modified slab and tray, in which the slabs or rockwool have been replaced with clay grow rocks. MrSoul finds that this setup works better and the expanded clay medium is reusable. 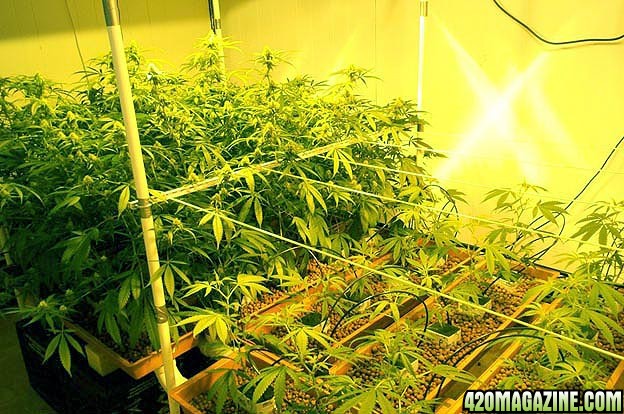 4 x 4 CELLS
The grow space is divided into 4' x 4' cells, over each of which a 1000 hps is centered. Each cell consists of 5 Hyrofarm Quantum RW slab trays (four parallel, one perpendicular) which are filled 2" deep with Hydroton.Three inch rock wool cubes are partially buried in Hydroton, 4 plants per tray. The DynaBloom nutrient solution (1200 ppm/6.0 pH) is being pumped to each plant site by a Chapin Spray Tube (N type) on a schedule of 20 minutes ON and 10 minutes OFF. The trays were modified to allow one inch of flooding. 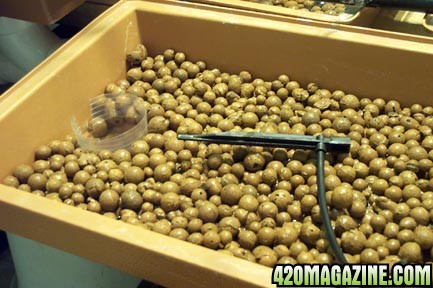 AN INCH IN EACH TRAY
Above, a close look at the business end of a tray before the clones go in, showing the Chapin Spray Tube (Chapin Watermatics Co.) as well as a plastic cup MrSoul modified into an overflow to create the water level (he just cut the bottom out of the cup and notched the side to the desired level). The nute solution picks up lots of oxygen from the spraying and also in the cascading overflow through 2" PVC tubing enroute to a remote reservoir (in a cool room) where a "bubble wand" located under the pump adds even more oxygen. Supplying oxygen to the roots is the KEY to growing! 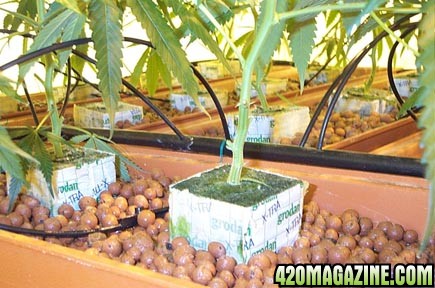 EACH CLONE GETS ITS OWN SPRAYER
Above is a view of the underside of the canopy showing the 3" RW cubes half-buried in Hytroton. The water level in the trays is about an inch deep. The Chapin sprayers are normally inserted into the cube's wrapper, but in this pic they're lying on the surface of the Hydroton. Each clone gets its own sprayer & they run 24/7. MrSoul tried on/off cycles but found it works as well or better spraying 24/7.

When growing a heavier variety like Genius, MrSoul harvests between 1 -1.25 lbs per 1k light.

How Often Should I Flood the Tray? (Flood Frequency)

How Do I Clone using Rockwool?