Pennywise said:
A good scope is a must have.
Click to expand...


Certainly made the difference for this! Once I get a little more coffee under the belt, it's off to do the deed.
.
.
My Journals :
Vortex's 4x4 RDWC Perpetual Grow Thread (current - Flowering, flipped 1/27)
Vortex's Lab - 4x4 Secondary Garden/Experimental On-Going Thread (current: tear down/build for next run)
Vortex's Dev Lab - Developing Baby Plants For Bigger and Better Things! (current: (1) GDP runt save (flipped 3/2), (4) clones weeding down to 2 mothers)

Halfway through my first cup (quart-sized, 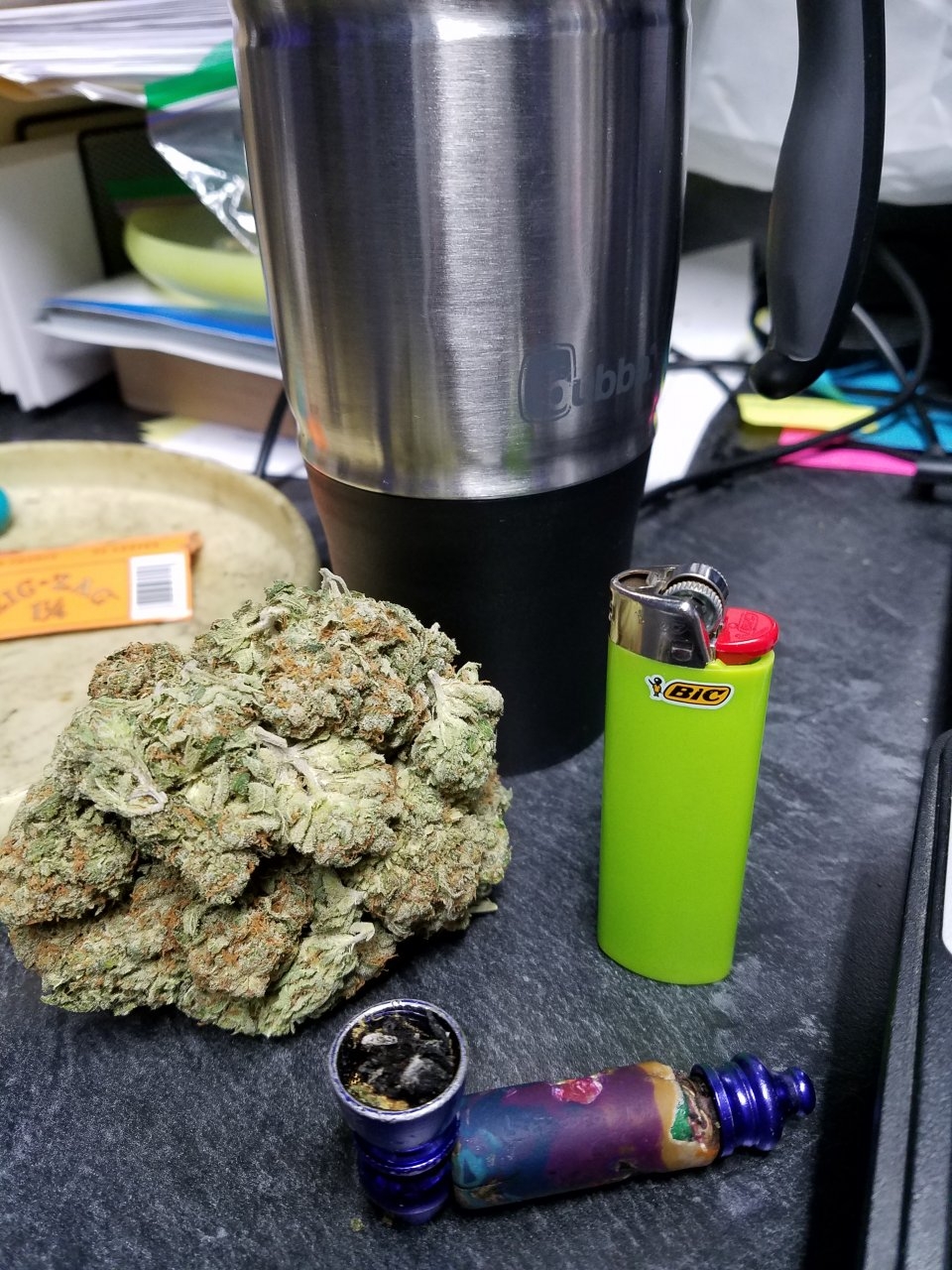 Peace, Hyena
"If pot hurts your memory, how come I always remember to smoke pot?" -Hyena

Want to learn how to grow? Here it is in one place. Plus, it's a neat story.
Project 21 - Dream Grow - A Complete Guide To Hydroponic Growing

Had a little bit of gummy to get things going. Nice and relaxed, but not too relaxed, if you know what I mean.

Going to take the trim/scruff and try coconut oil. Not sure if it needs dried first for that? In the past I’ve just passed along the trim and got some edibles back. Figured a good time to try it myself.
.
.
My Journals :
Vortex's 4x4 RDWC Perpetual Grow Thread (current - Flowering, flipped 1/27)
Vortex's Lab - 4x4 Secondary Garden/Experimental On-Going Thread (current: tear down/build for next run)
Vortex's Dev Lab - Developing Baby Plants For Bigger and Better Things! (current: (1) GDP runt save (flipped 3/2), (4) clones weeding down to 2 mothers)

Well shit. Guess I should have planned better. Where I plan to trim it would be best to wait for the other girls to wake up first, which is just over 90 minutes from now.


I thought so. While I'm certain there were no light leaks in the RDWC tent, I'd rather not take any chances and play it safe.


As a note, I'd like to move the trim discussion to the right thread. That way I don't come back looking for something on the RDWC and think I flowered her out in 2 weeks.

"And Here... We... Goooooo!!!1!1!!" - Joker Welcome one and all to my little space where I'll document my follies with my "lab" grow space where I tinker around with things I'm not well versed in, haven't tried, or just need the extra space to grow more plants. This will be an on-going thread...
www.420magazine.com
.
.
My Journals :
Vortex's 4x4 RDWC Perpetual Grow Thread (current - Flowering, flipped 1/27)
Vortex's Lab - 4x4 Secondary Garden/Experimental On-Going Thread (current: tear down/build for next run)
Vortex's Dev Lab - Developing Baby Plants For Bigger and Better Things! (current: (1) GDP runt save (flipped 3/2), (4) clones weeding down to 2 mothers) 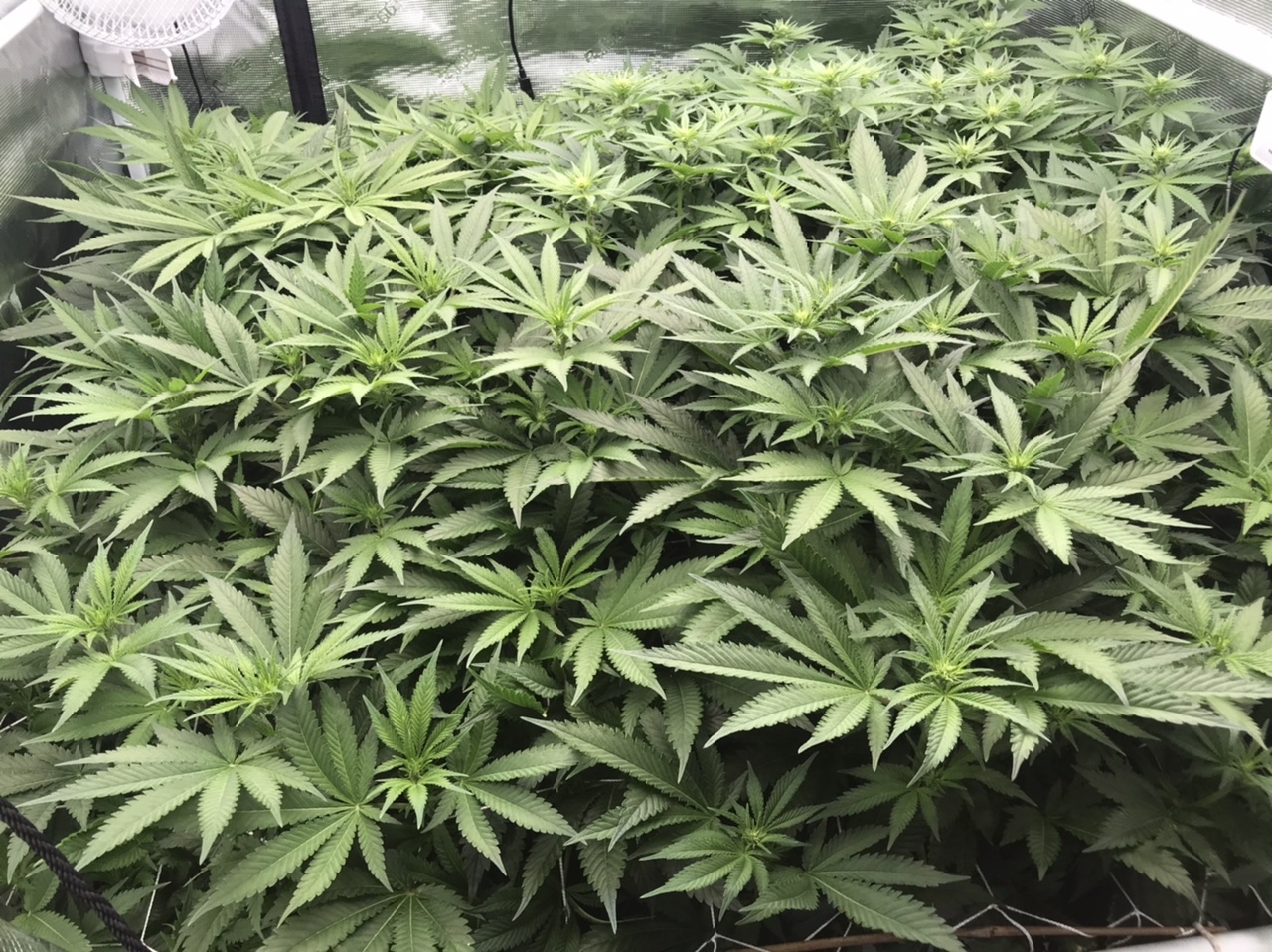 One from the front... 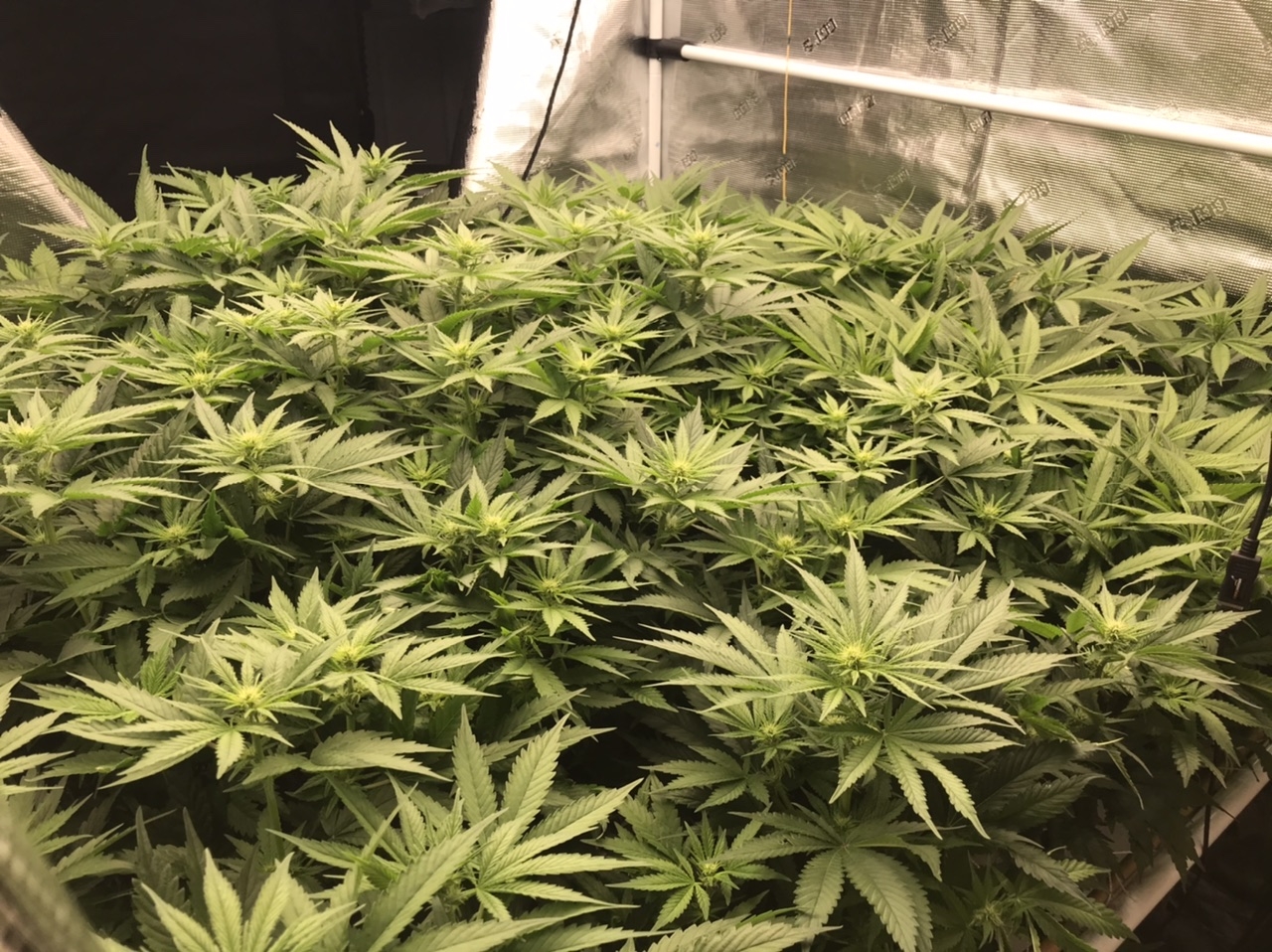 And now one from the back.


Res change seems fine, so nothing to really report. Raised the light right before the pics. Was getting to about 16", so bumped it back up to about 22".

Maybe I should have kept it lower to keep the DP in check, but we'll see what happens I guess. Tomorrow will be day 15 from flip, so hoping not too much stretch left in her.
.
.
My Journals :
Vortex's 4x4 RDWC Perpetual Grow Thread (current - Flowering, flipped 1/27)
Vortex's Lab - 4x4 Secondary Garden/Experimental On-Going Thread (current: tear down/build for next run)
Vortex's Dev Lab - Developing Baby Plants For Bigger and Better Things! (current: (1) GDP runt save (flipped 3/2), (4) clones weeding down to 2 mothers)

Nice healthy looking and Man what a canopy

Thanks guys. It’s been a bit of a battle, and the front left Strawberry Lemonade is laying catchup a bit. But overall they seem to be in check for the most part. Hopefully when it’s time I can figure out what is what.

My original plan was to keep a square of netting between them. Didn’t work. So maybe I can do something when I put the 6” support netting up in a few weeks.
.
.
My Journals :
Vortex's 4x4 RDWC Perpetual Grow Thread (current - Flowering, flipped 1/27)
Vortex's Lab - 4x4 Secondary Garden/Experimental On-Going Thread (current: tear down/build for next run)
Vortex's Dev Lab - Developing Baby Plants For Bigger and Better Things! (current: (1) GDP runt save (flipped 3/2), (4) clones weeding down to 2 mothers)

Things are happening with the girls, just nothing overly interesting at this point.

Durban Poison is throwing little flowers, Strawberry Lemonade #2 (right) is doing the same. SL1 (left) is starting to. Blue Dream isn't quite there yet. SL1 is also partially shorter than the rest of the canopy, but not by a whole lot.

I took a handful of fans off of BD, DP, and SL2 last night (about a shoe box worth) to try and give their stretch a hiccup. They're all pretty evened out, so maybe that will give SL1 just enough of a hiccup to catch up a bit. It's not a huge difference, but 3" is still 3". In a few places on the very outer edges it might be 4"-5". I also bumped the light intensity up a bit more. I had it at 80% for the stretch, so they wouldn't burn as they get closer. Even as I raise the light, I'd hate to burn them up if they grew extra fast one night/day, and it seems to work. So I raised the the light about 4", and cranked the intensity to 93%. Once the stretch is over next week sometime (guessing, but should be) then I will get the light set at 22" and pop it to 95%. 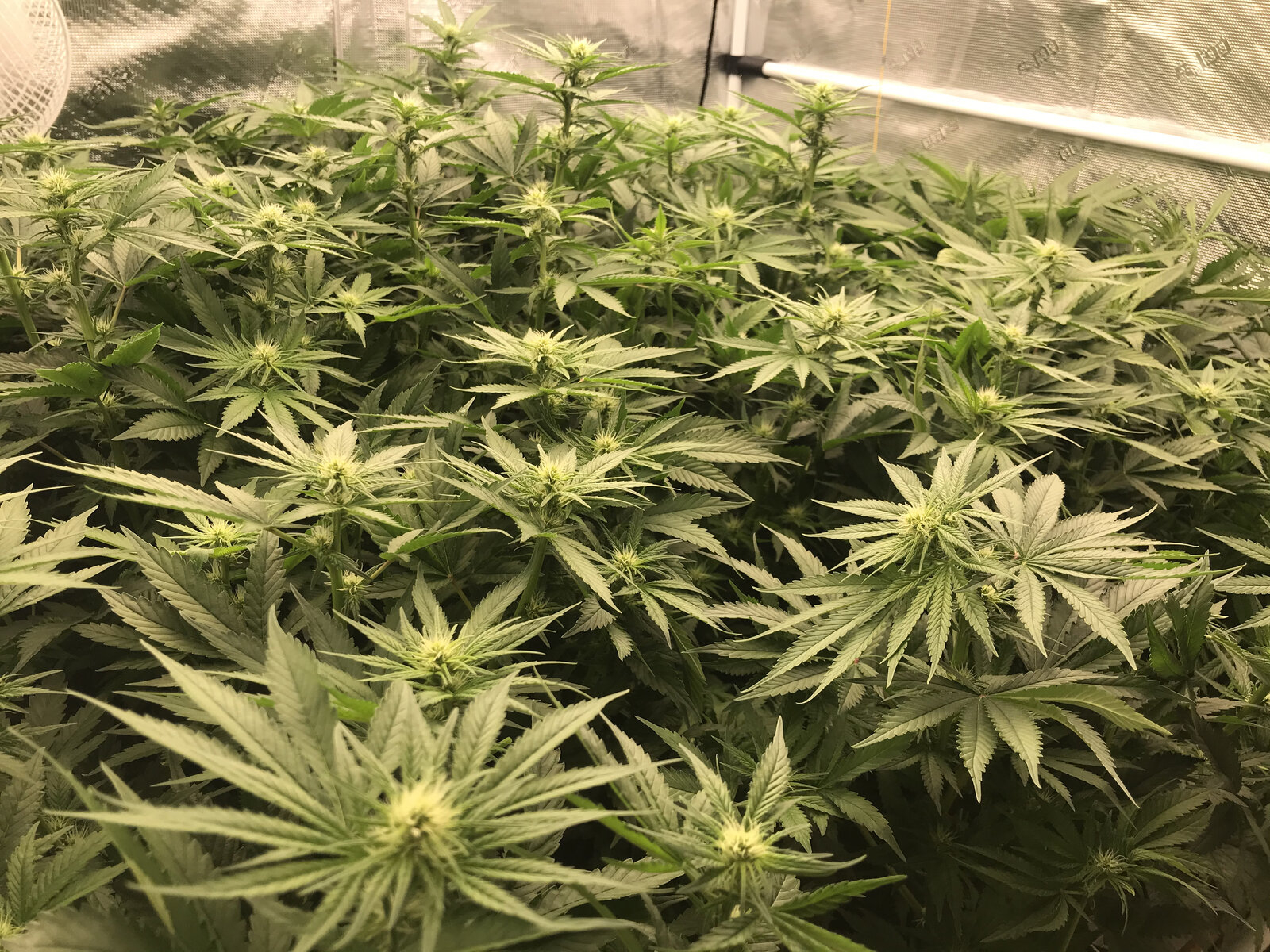 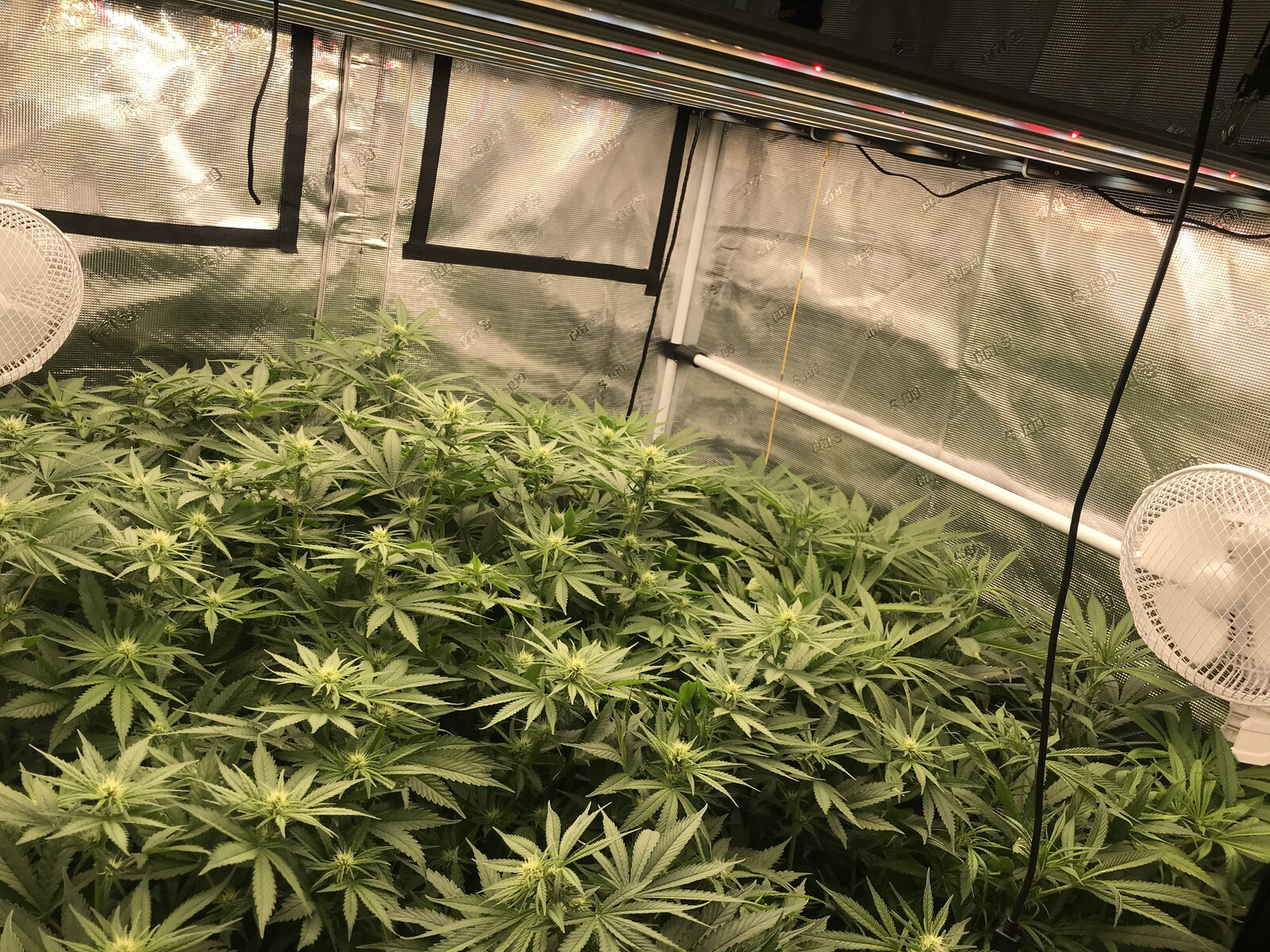 Taken from the back. So DP bot left, BD bot right, SL2 top left, SL1 top right. If you look close enough to the second pic, you can see about 15% in the back right corner where part of SL1 is a little lower. Light coverage is good enough that it won't be an issue, and once the stretch is over I'm going to take a good amount of fans to get things opened up. 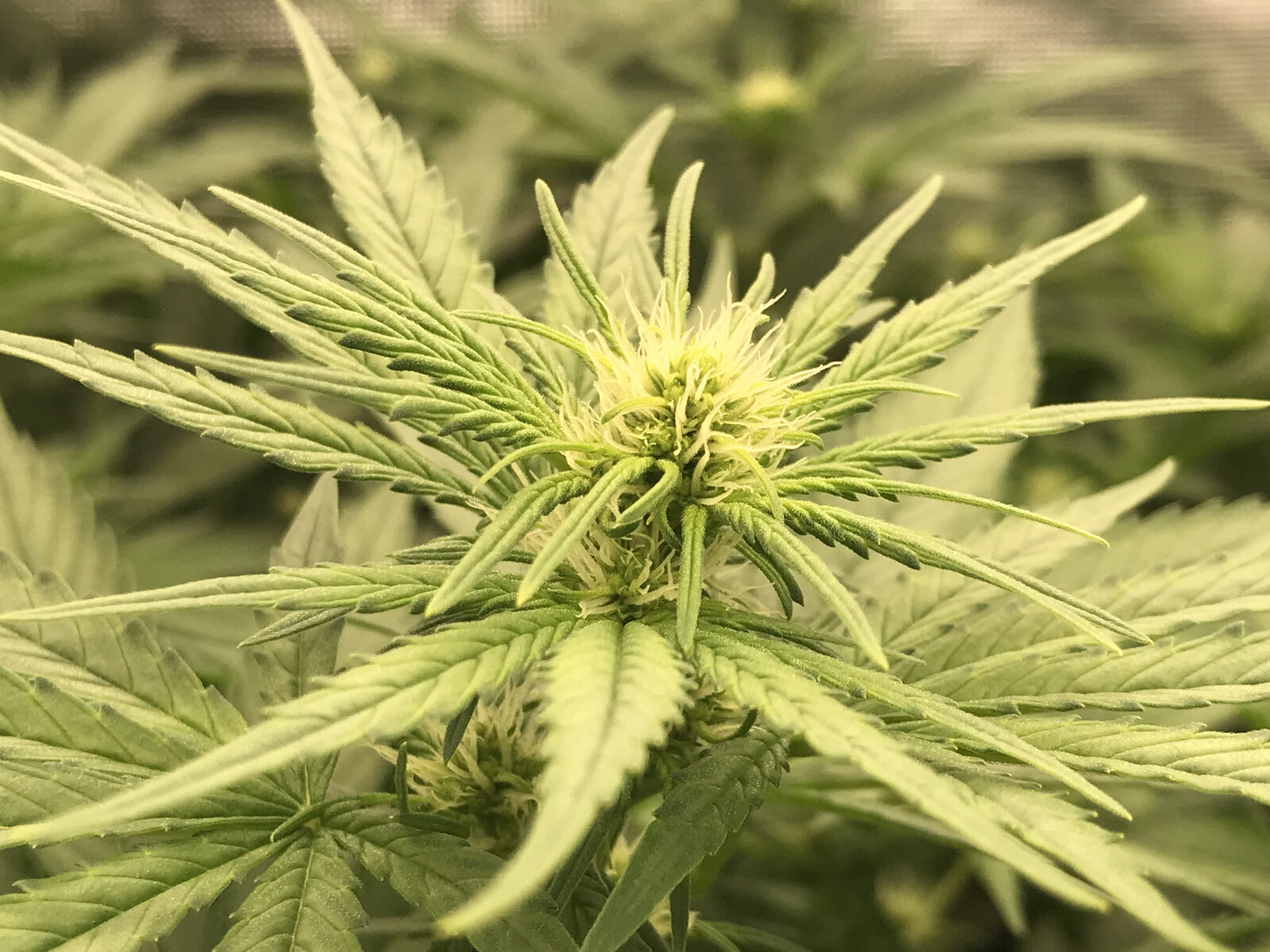 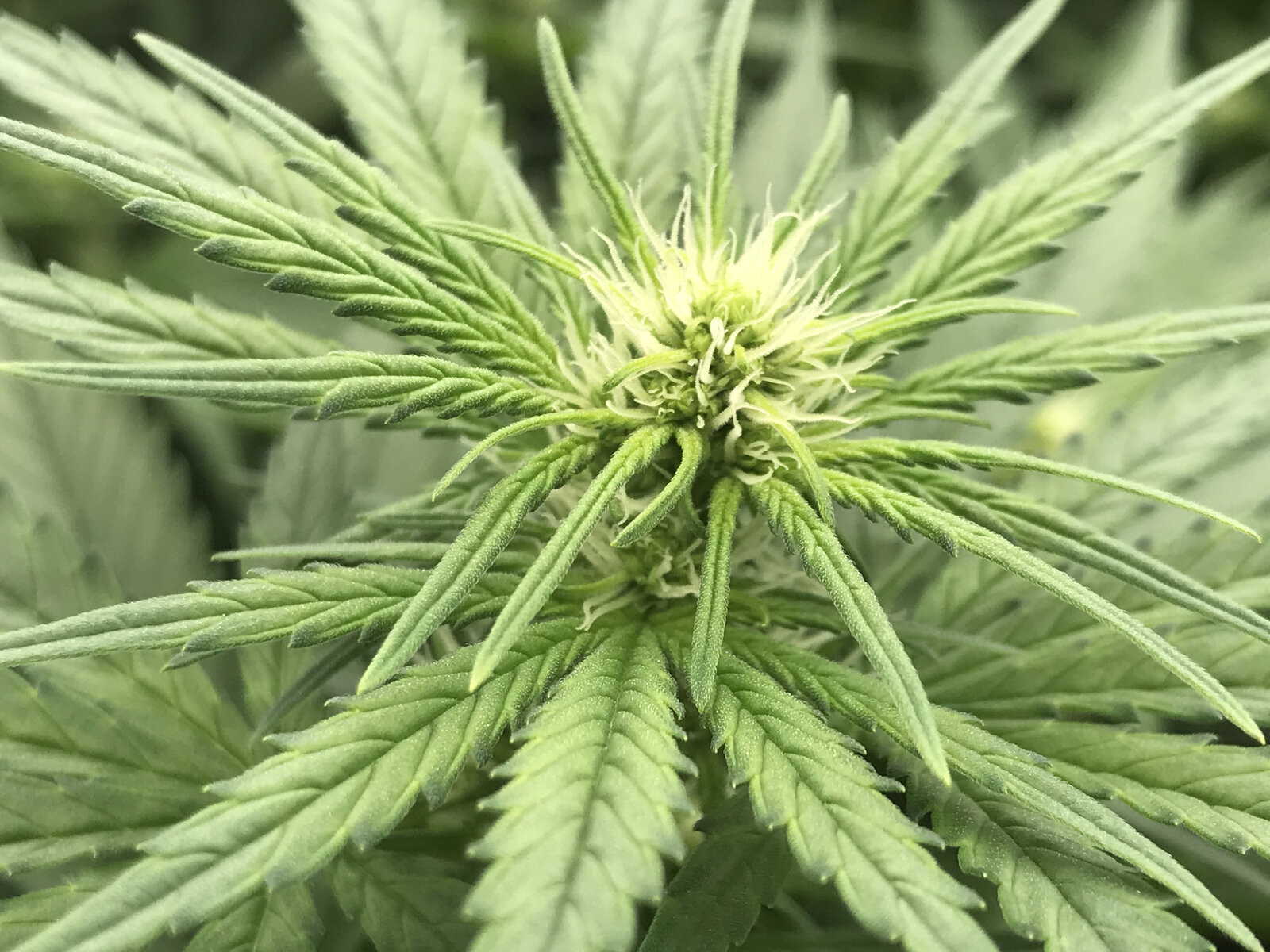 Yes, I forgot to filter the first image.

As you can see, she's already frosting up, and she's still stretching too!

Water params have been tolerable. EC is slightly dropping, pH is slowly rising. Water temps are OK, but not perfect. They're varying over the course of the day from about 70F at lights on, up to 75F (on occasion 77F) later in the daylight cycle.

The "chart" tells me that this is good, and bump the EC a bit. The last feed was at 6g/gal, and I'm skeptical/nervous about increasing it much considering the issue with the change before last. The leaves look pretty good, although in a few places there might be a very slight trend towards a very slightly lighter green. Nothing to really catch my attention much. That being the case, the drop in PPM could be from the top-off res since the mix in there is more like 2g-3g/gal, which could potentially be influencing the EC/PPM to drop slightly. The drop has been maybe 20-30 PPM, which is negligible really.

I may try a bump to 6.1g/gal, but honestly the more I type about it has triggered me to recall that the first couple days they drank the res down a bit before the top-off kicked in (I need to re-adjust the float) and the EC was static. It wasn't until the top-off started keeping up and its water level was dropping that I noticed the EC lowering.


Anyway, the bump to 6.1 may not be terrible anyway, if the EC/PPM is steady, that's fine. If they weren't eating the EC would be rising. I may bump the top-off up a hair, but at this time doesn't really seem necessary. Maybe 3g/gal is fine on that. (50% of main mix.)
.
.
My Journals :
Vortex's 4x4 RDWC Perpetual Grow Thread (current - Flowering, flipped 1/27)
Vortex's Lab - 4x4 Secondary Garden/Experimental On-Going Thread (current: tear down/build for next run)
Vortex's Dev Lab - Developing Baby Plants For Bigger and Better Things! (current: (1) GDP runt save (flipped 3/2), (4) clones weeding down to 2 mothers)

Couple of snaps from when I changed the res on Sunday. A day later than I wanted, but whatever. 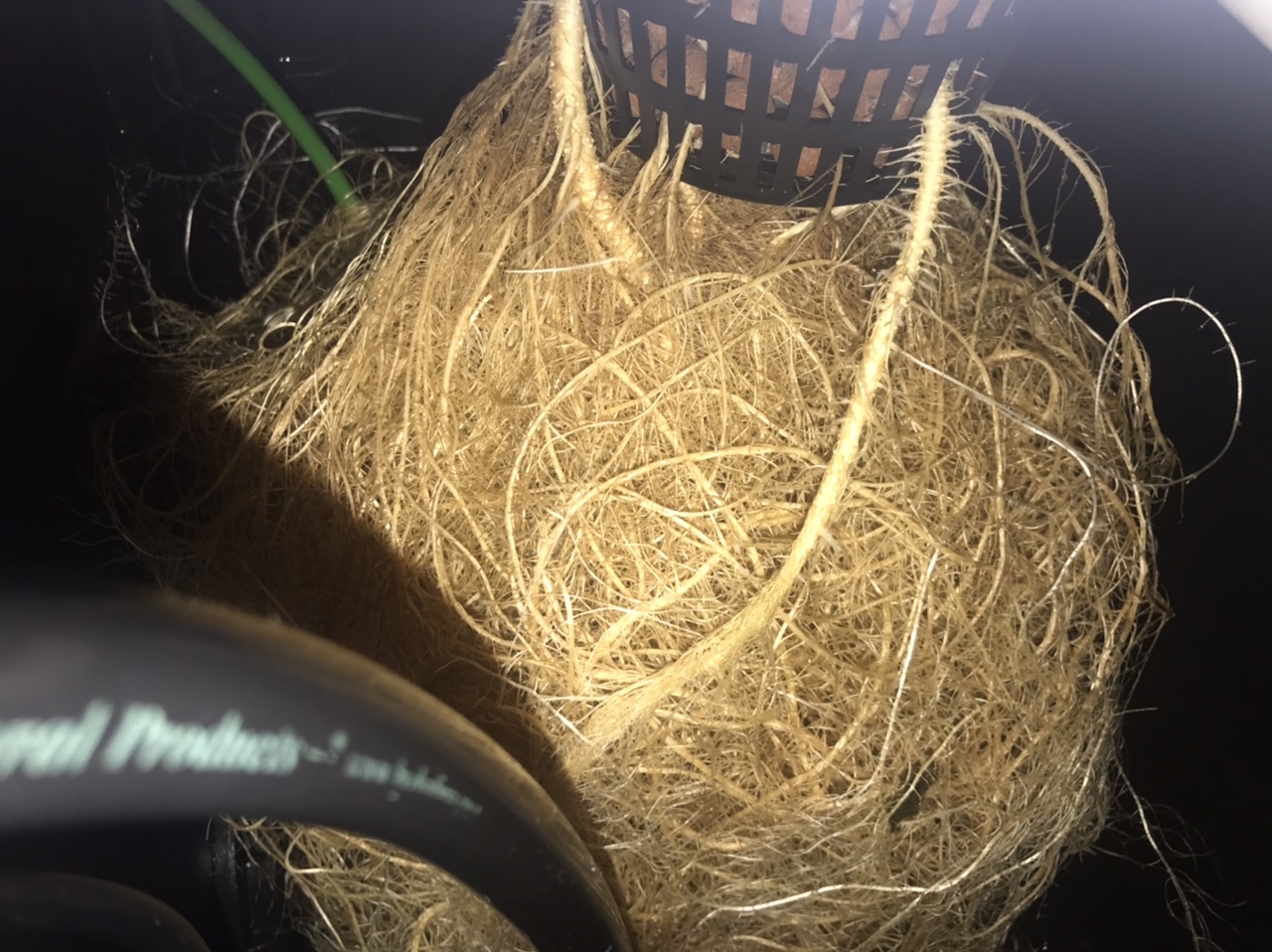 Root ball of SL1 (Strawberry Lemonade, left). Nice and clean, but thanks to MegaCrop they have a tint to them. 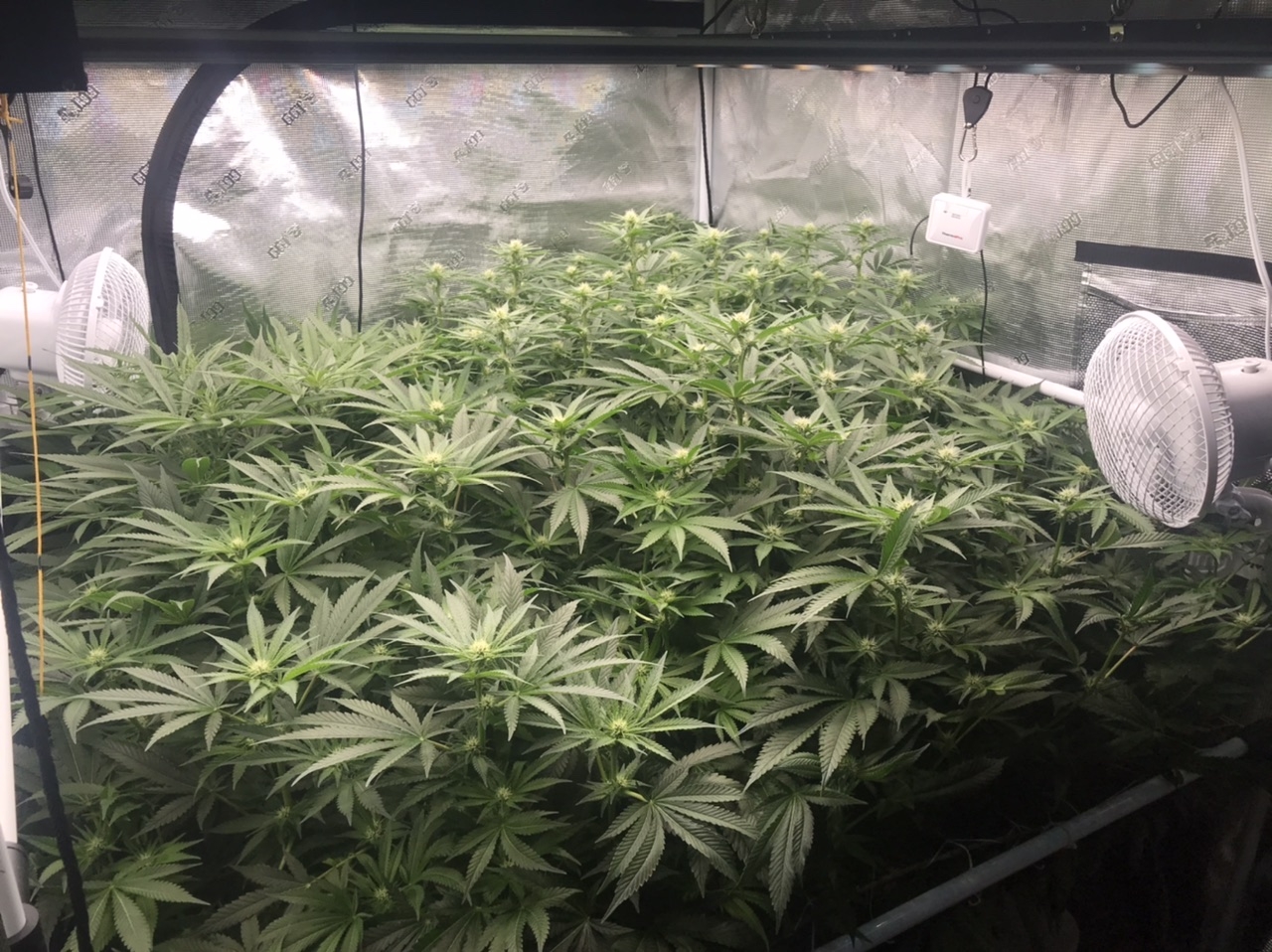 I need to get another shot of this today. There's a few already up to within maybe 6" of the light. Not showing an issue of burn or anything, so I'm trying to play it slow with raising the light to help curb stretch and keep things as even as possible.

I did get in yesterday and clean up underneath a little bit. Not a full lolly popping, but at least got a little bit of scruff out. 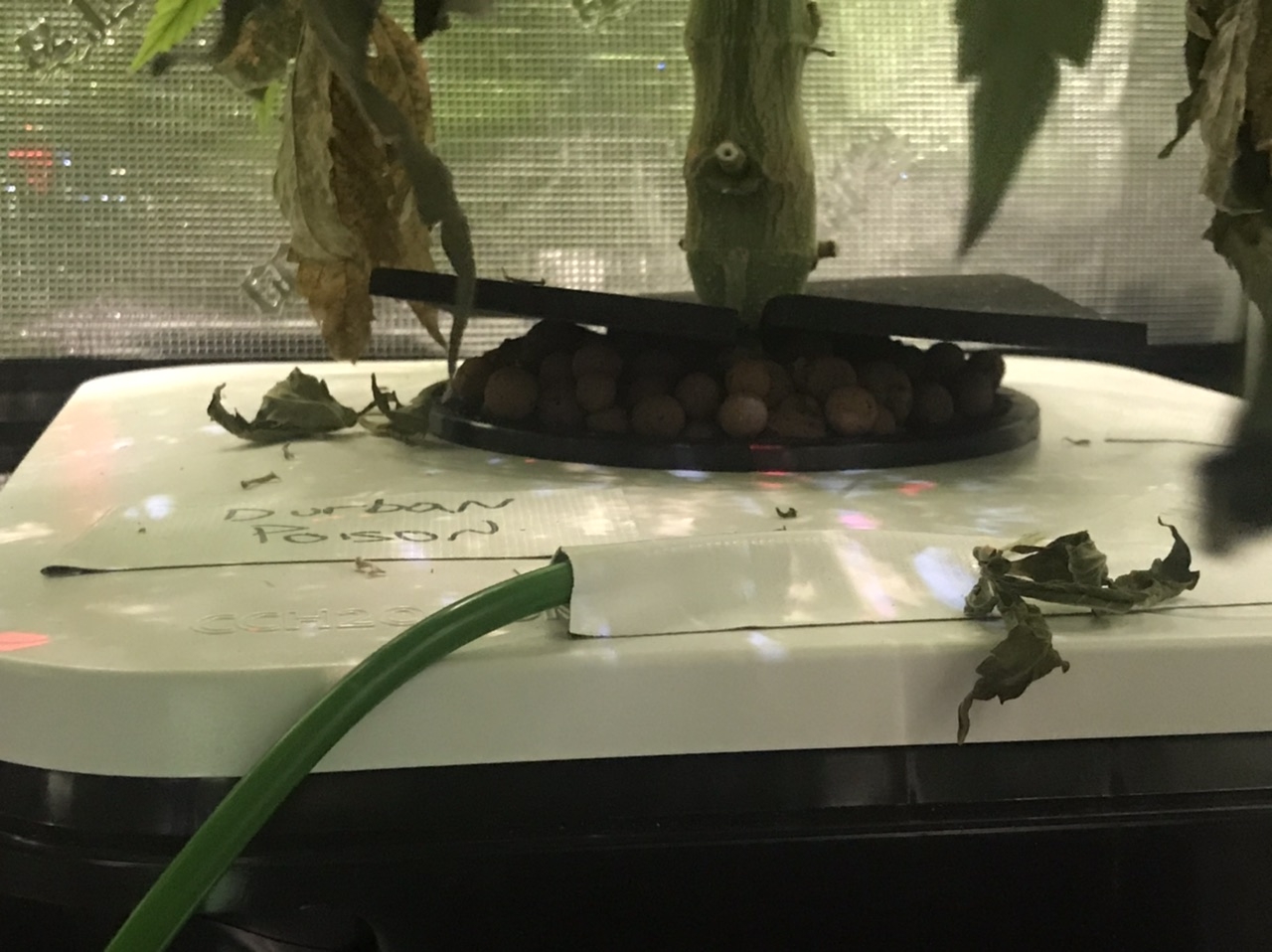 Here's the base of the DP (Durban Poison.) She's in a 6" net pot, and gettin a nice trunk on her now. This pic was shot from the front of the tent, and before I got into the back to clean up. She's managed to push some of her hydroton up, and the pot cover as well. I scooped a little of the hydroton off and got the cover back where it should be.


I am hoping that the stretch will have run its course by this weekend. I need to get in there and thin things out a lot. Get a good defol going, as well as find more larf shit that won't reach the canopy to get out and save some time down the road.
.
.
My Journals :
Vortex's 4x4 RDWC Perpetual Grow Thread (current - Flowering, flipped 1/27)
Vortex's Lab - 4x4 Secondary Garden/Experimental On-Going Thread (current: tear down/build for next run)
Vortex's Dev Lab - Developing Baby Plants For Bigger and Better Things! (current: (1) GDP runt save (flipped 3/2), (4) clones weeding down to 2 mothers)

Thanks Mr S! Need to get the canopy evened out a touch, but overall it’s pretty good for this point. They need a good thinning, and I should probably bump up to the bigger floor fan now too.

Always something to be done!

This past week the girls saw a big post-stretch defol. It took a lot of time to get it done (about 6 hours over 3 different sessions, spread across a couple three days), but it got there. (Was done last monday, day 28.) 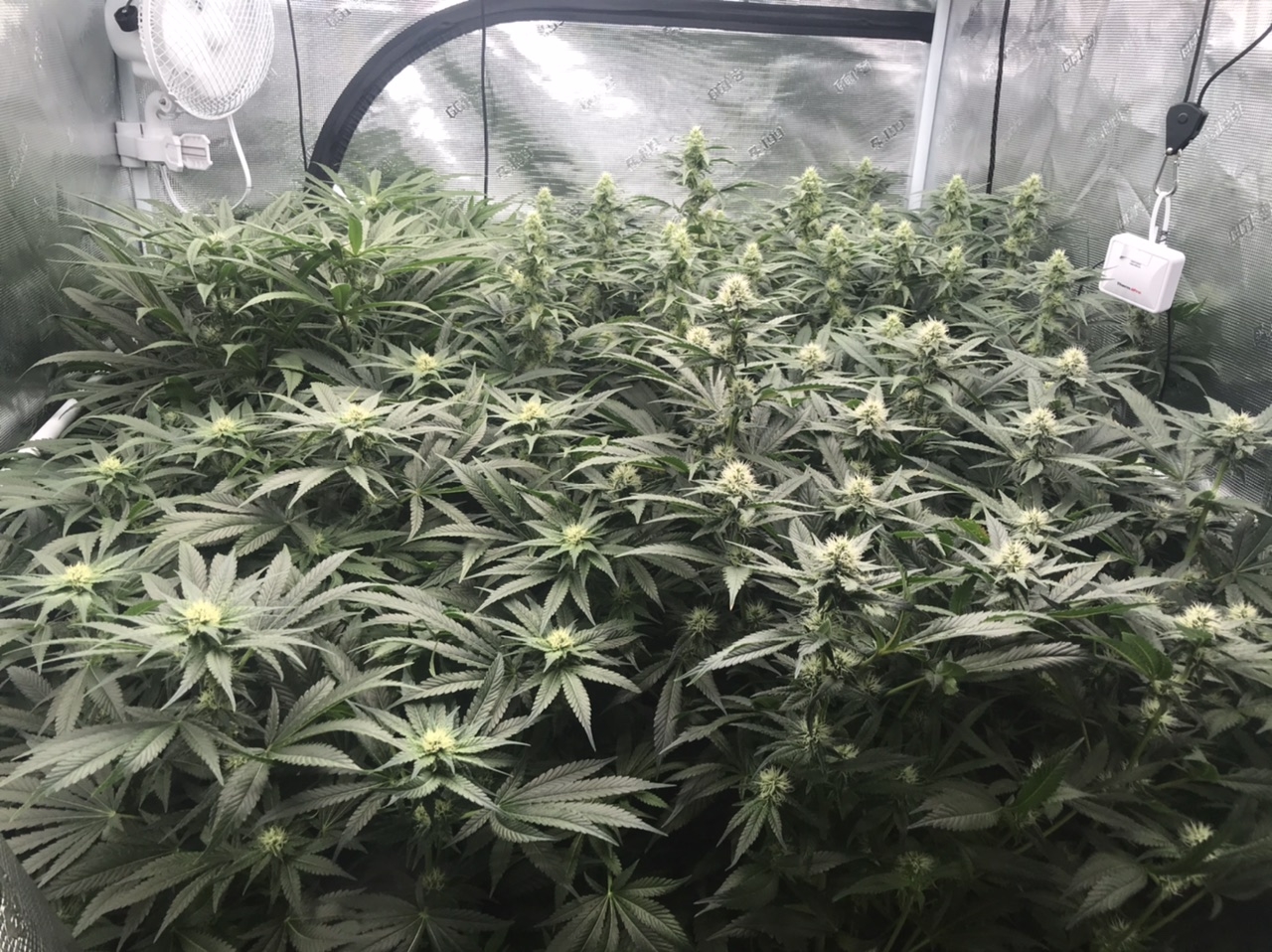 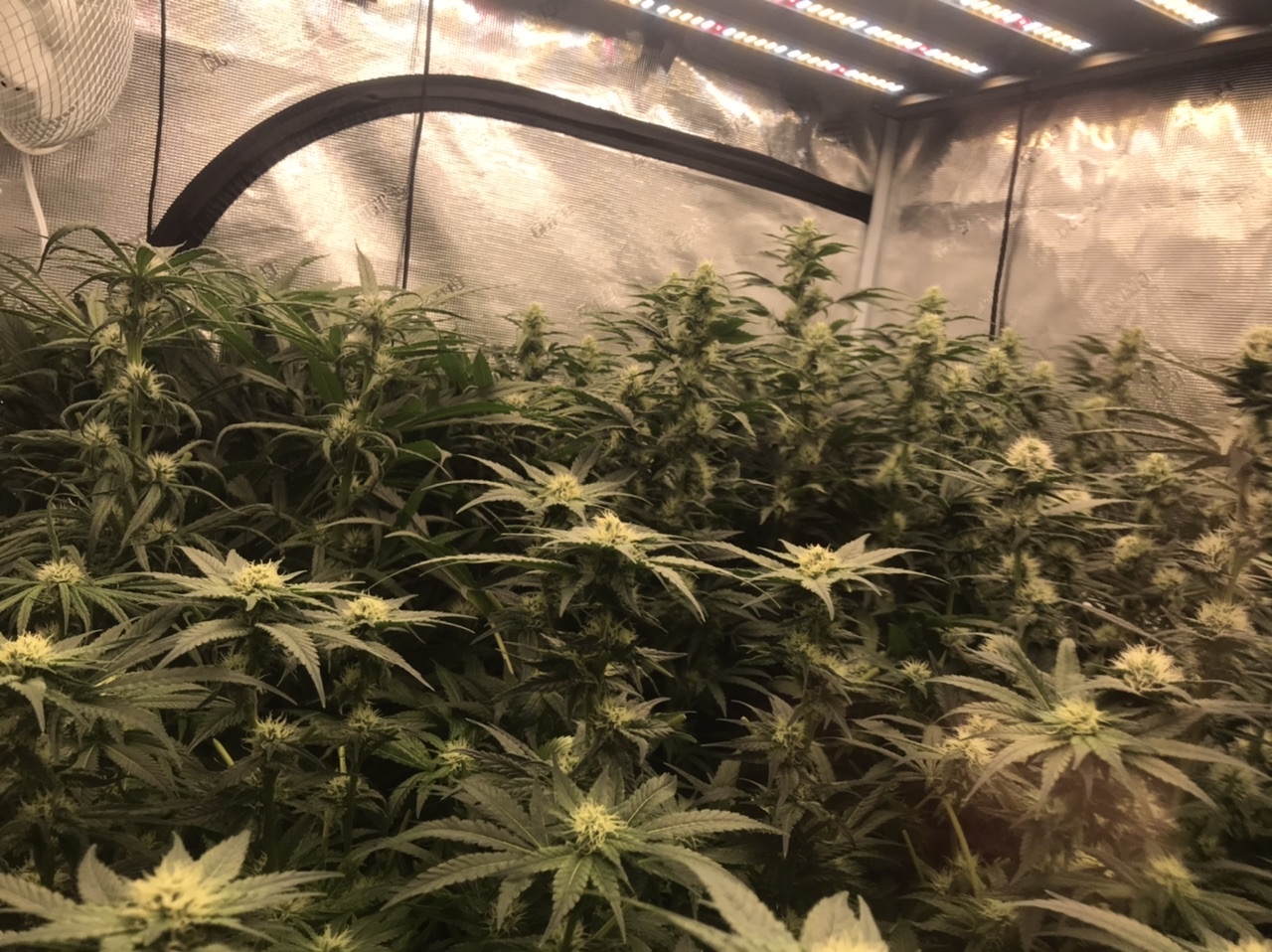 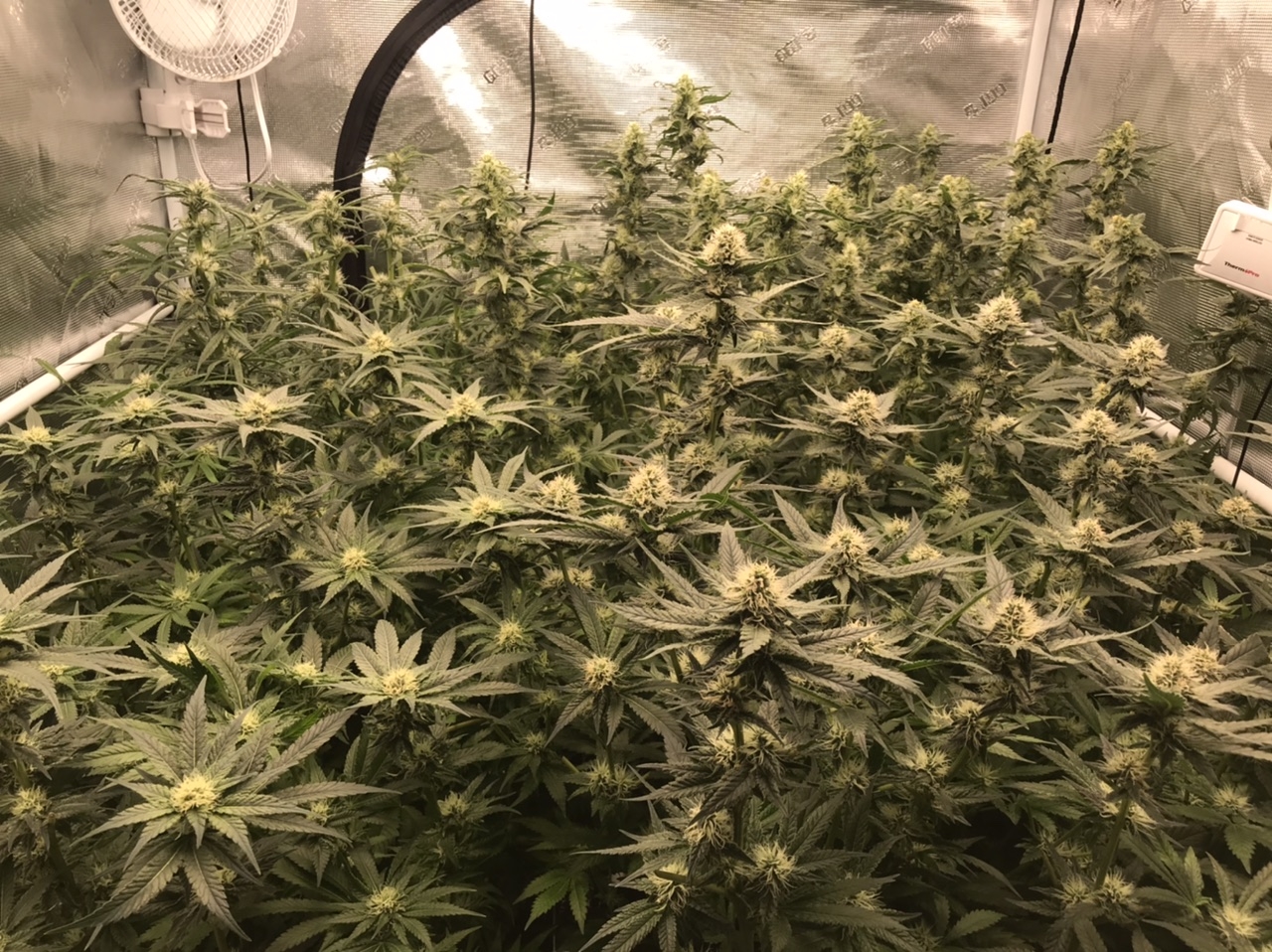 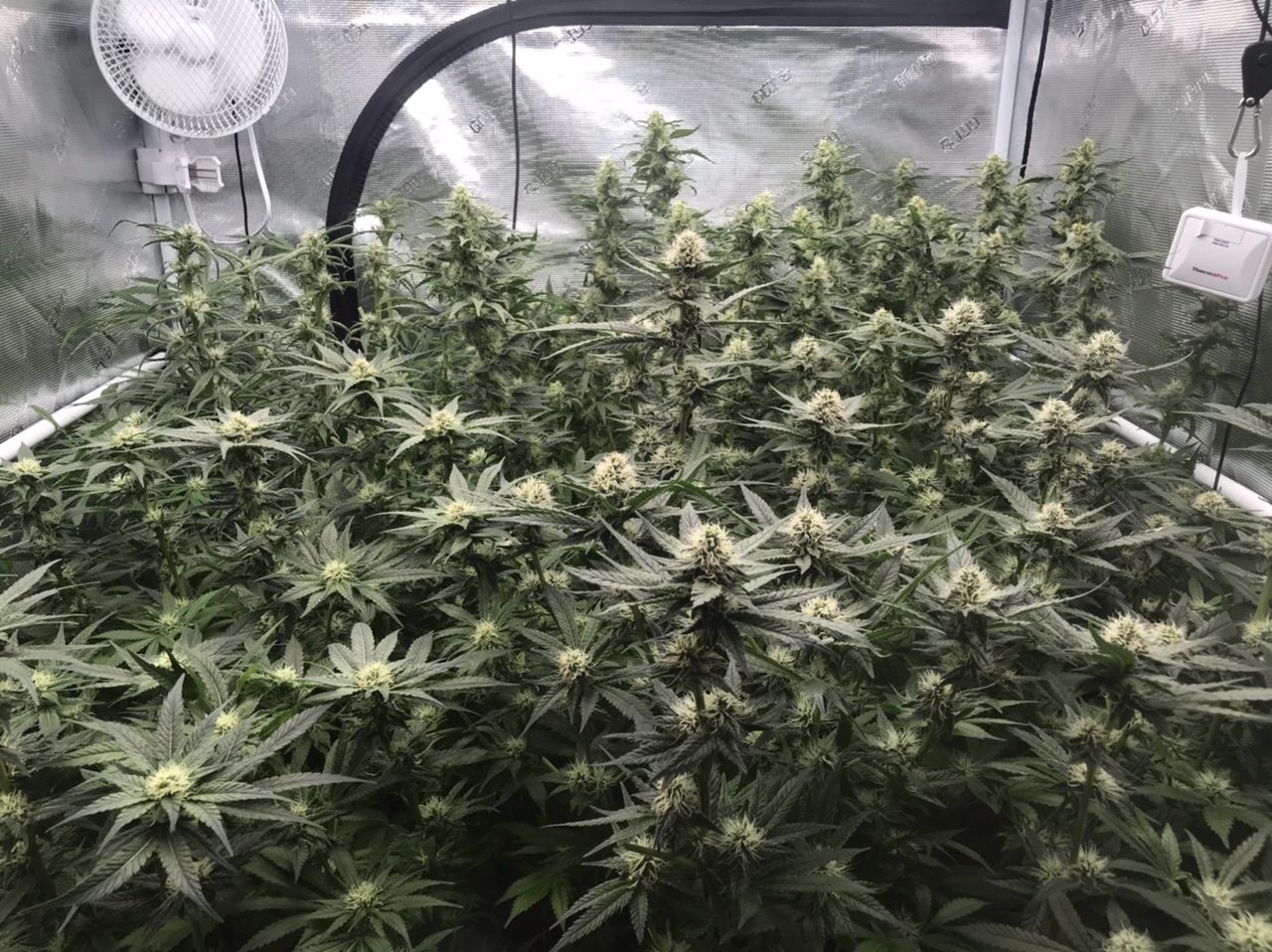 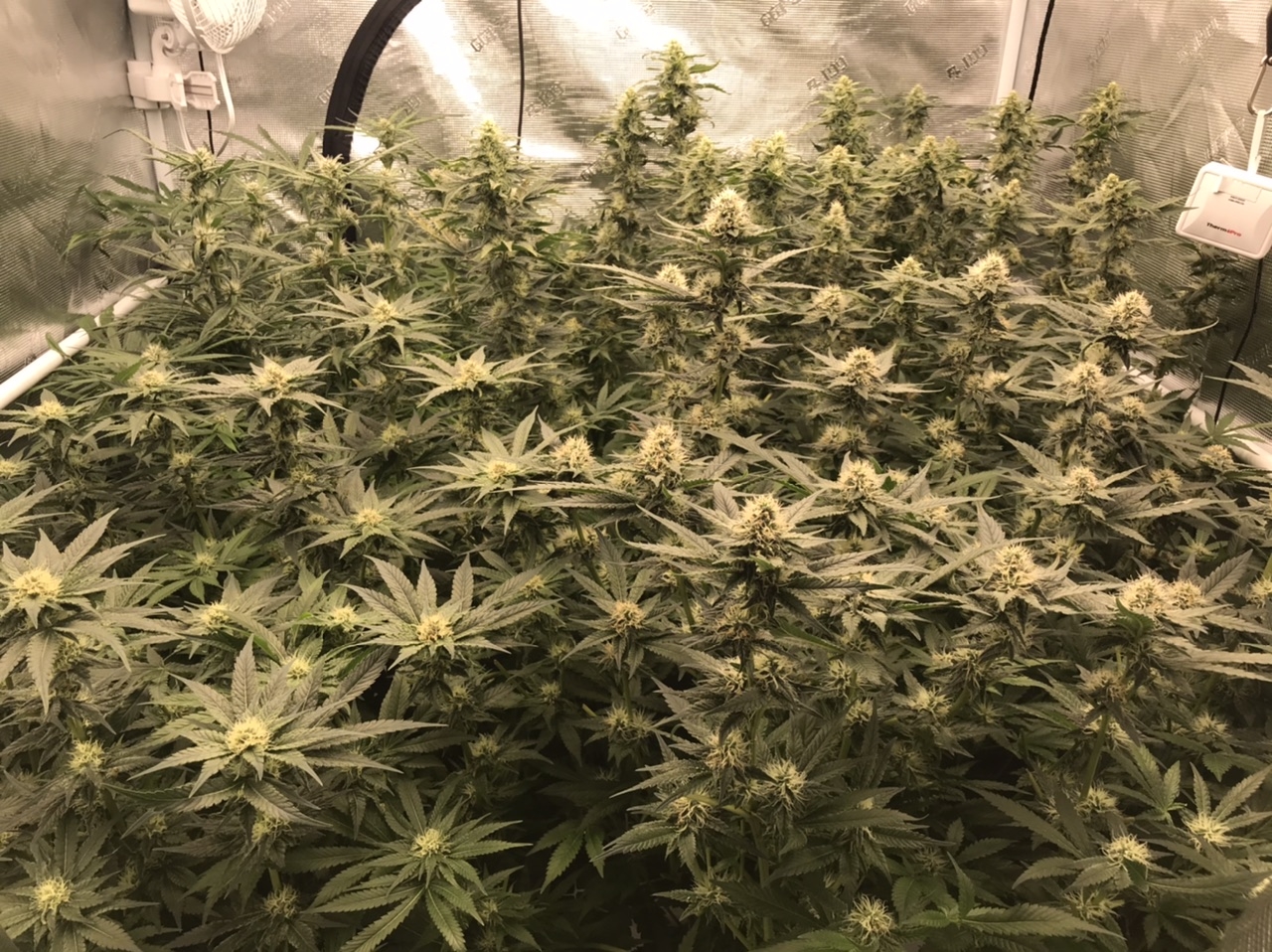 Not a great angle to see, but these were in-progress shots. I'll see about getting a fresh one sometime today.


It definitely made a huge difference, and really opened up some lower flowers to a lot more light. I didn't strip every single fan, but I did take quite a few. I'm letting her settle in from this, then will be doing a final cleanup underneath in the next week or so.


Water changed on schedule yesterday. Bumped the girls up to 6.25g/gal of MC, and also added a tick more of the no-nitro, flowering calmag (was using 1ml/gal, bumped to 1.5ml/gal) as a few fans across them all were showing that they would like a little more.

I will tell you this, though. These girls are sticky AF. And I mean bad. (Well, it's good, but you know what I'm getting at here.) I had to clean my scissors several times during each session. When I was done, the hair on my arms was just matter down. Like I'd dipped it in syrup, then sat out in the sun for a bit. Thankfully I had plenty of iso alcohol, and lava soap.

They're doing really, really well. I have a few tops that might be 4" above the rest right now. Not quite tall enough to worry about a supercrop (yet), but still not as even as I would like. On the bright side, they're stacking on really well. Especially the Durban Poison. Oh wow is she going to be good. Well, provided I don't screw it up of course.

Anyway, sorry about the lack of info the last week or so. Been working through harvesting the Lab tent as those girls become ready, plus the defol here, as well as keeping up with everything else. So time is a precious commodity around these parts lately.

Growers problems, am I right? 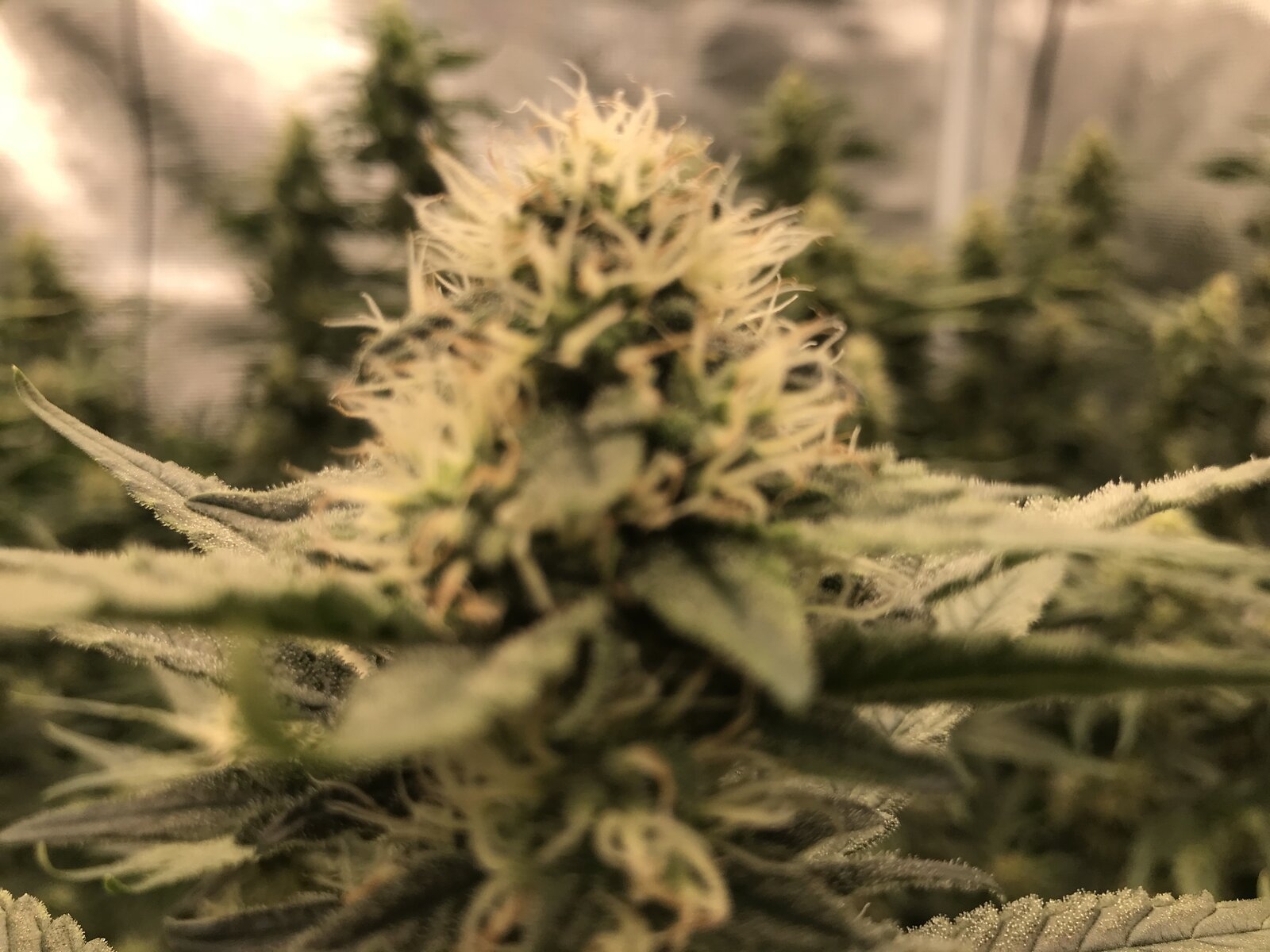 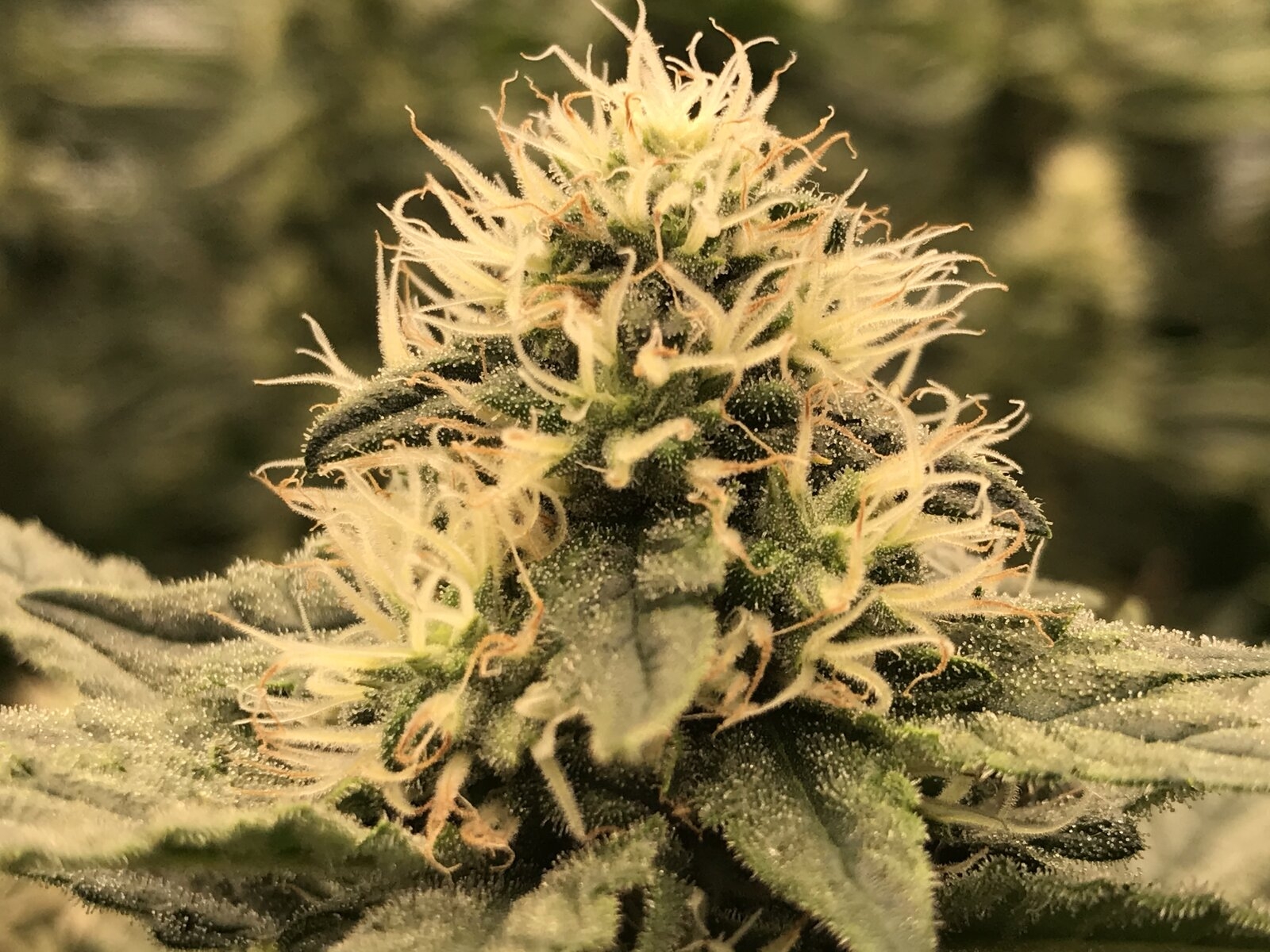 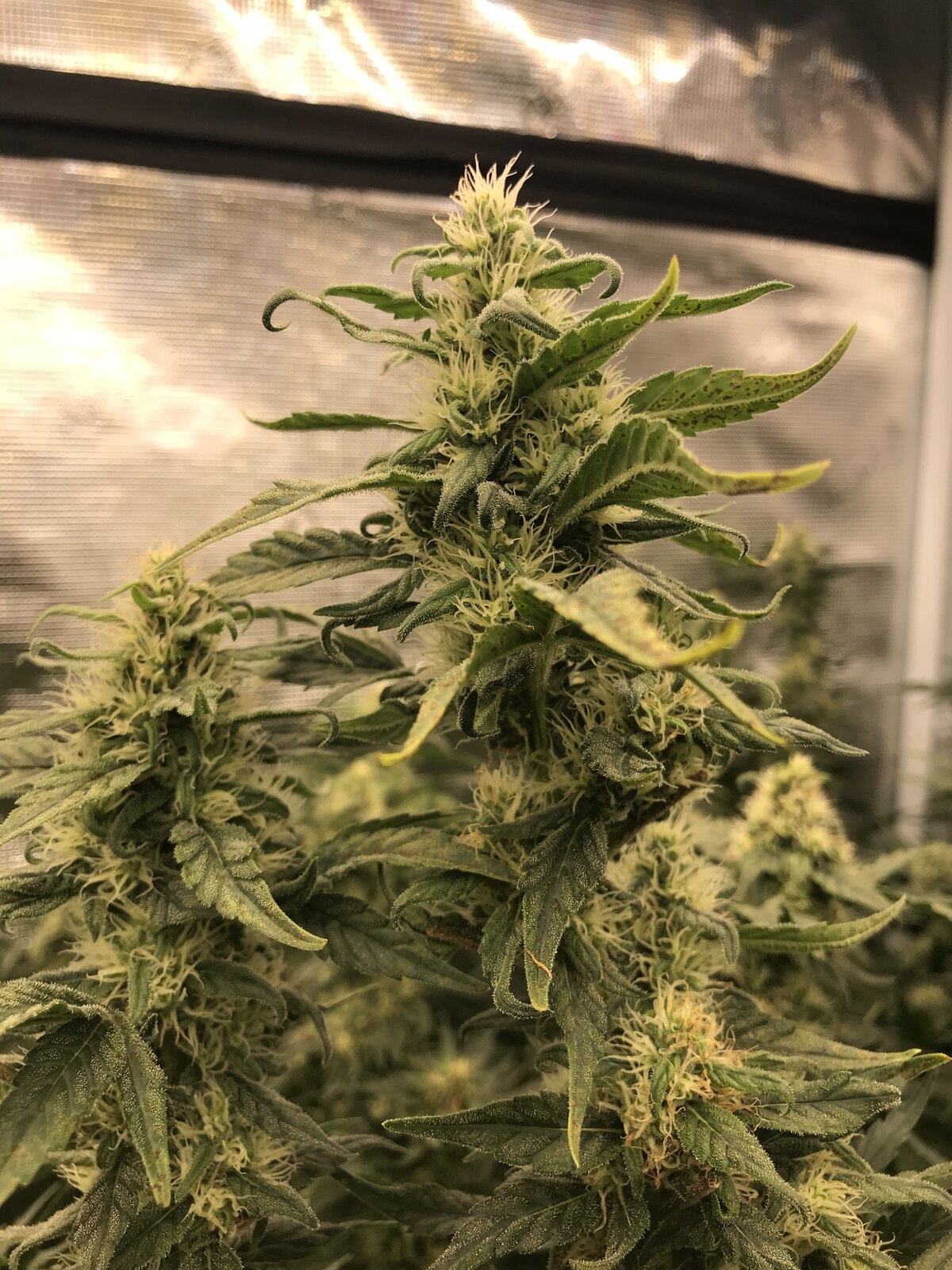 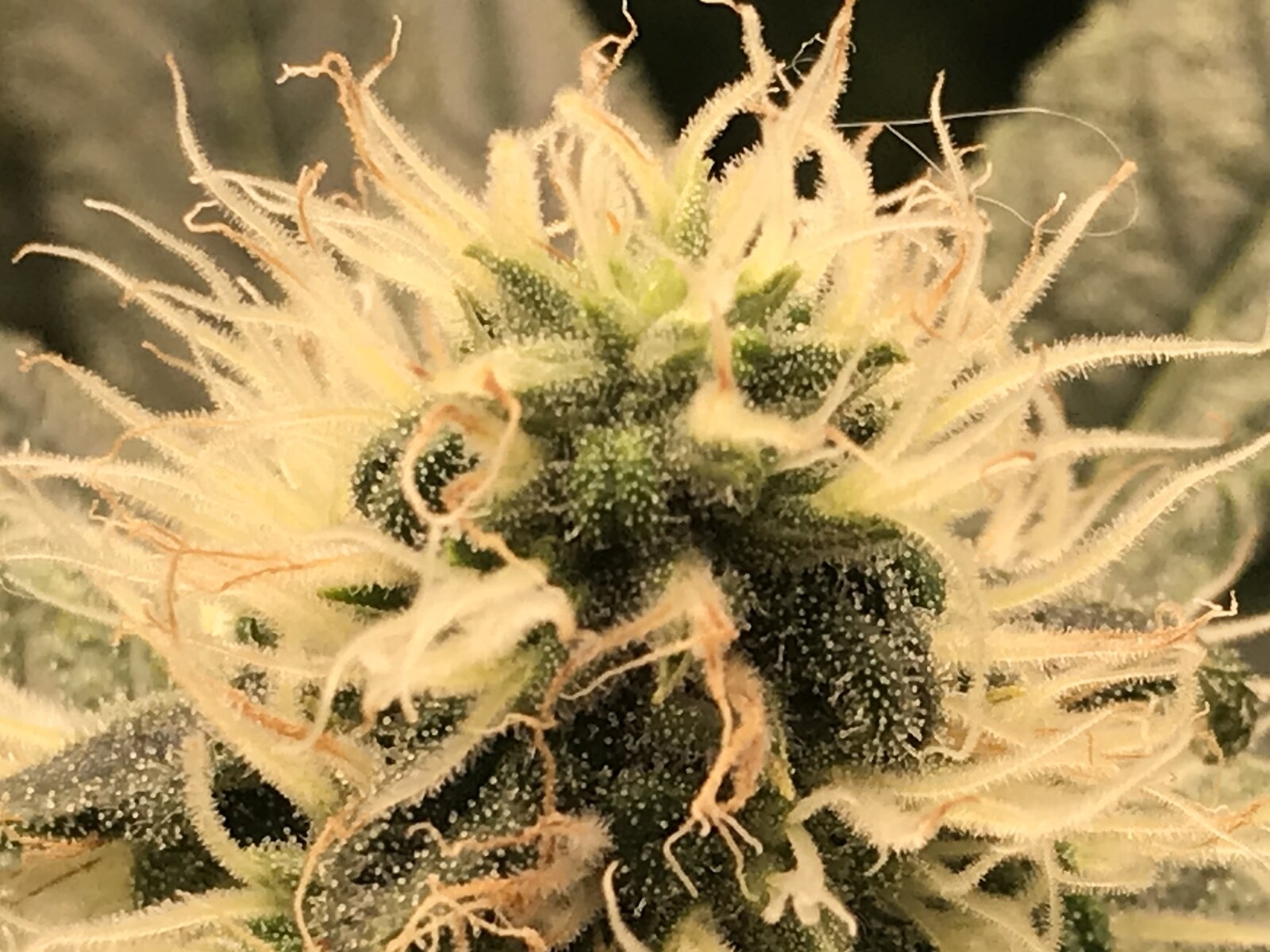 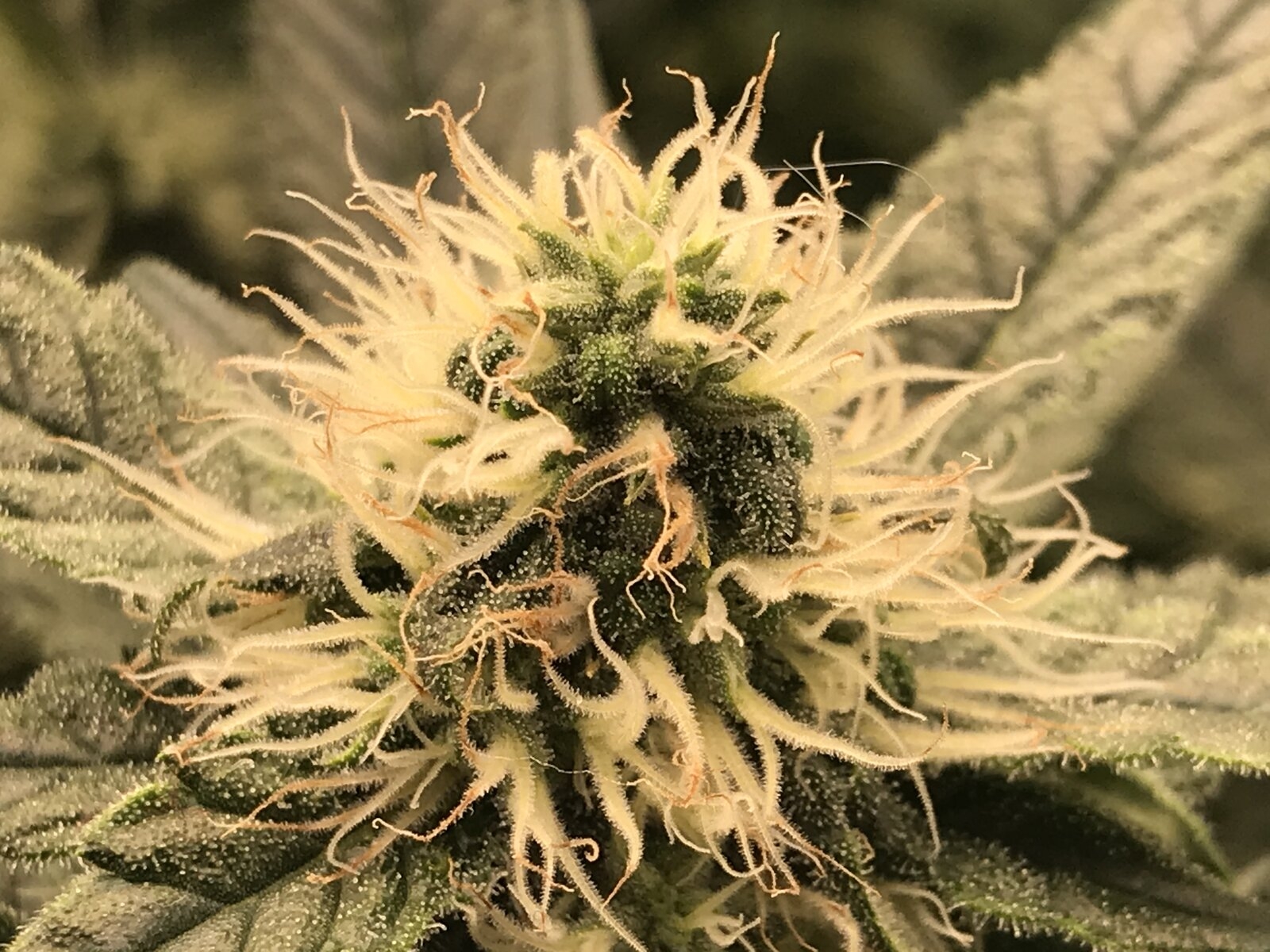 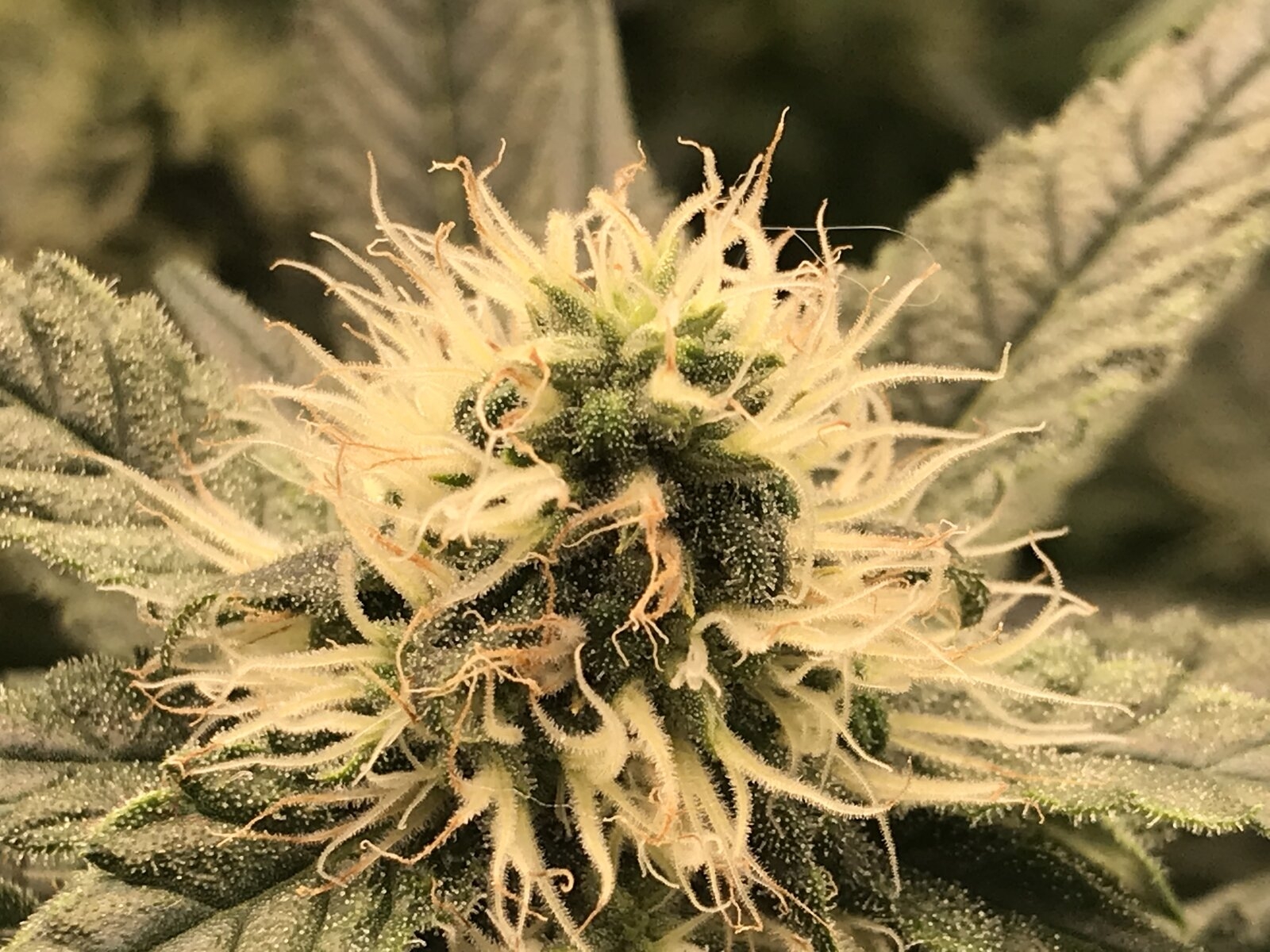 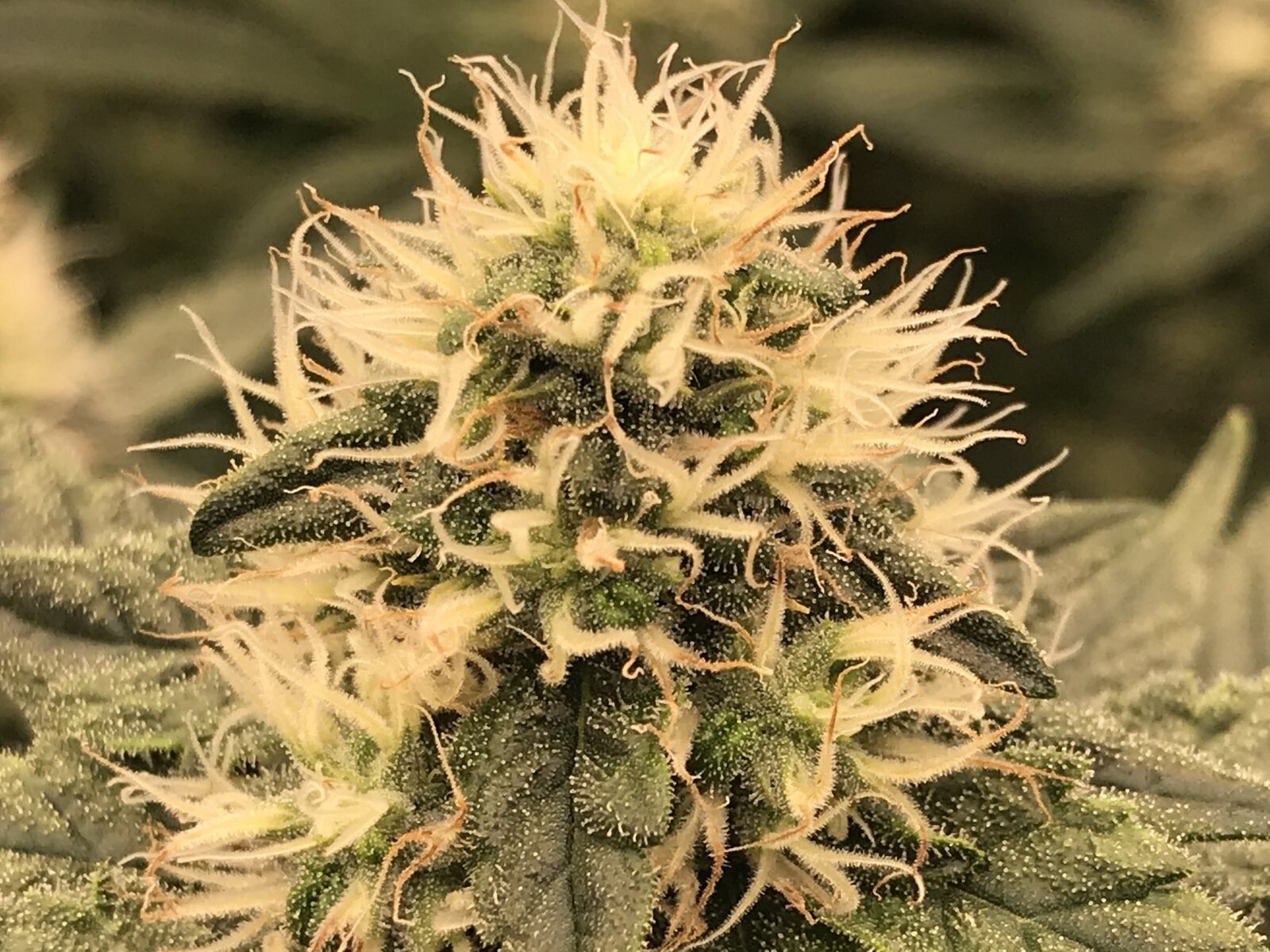 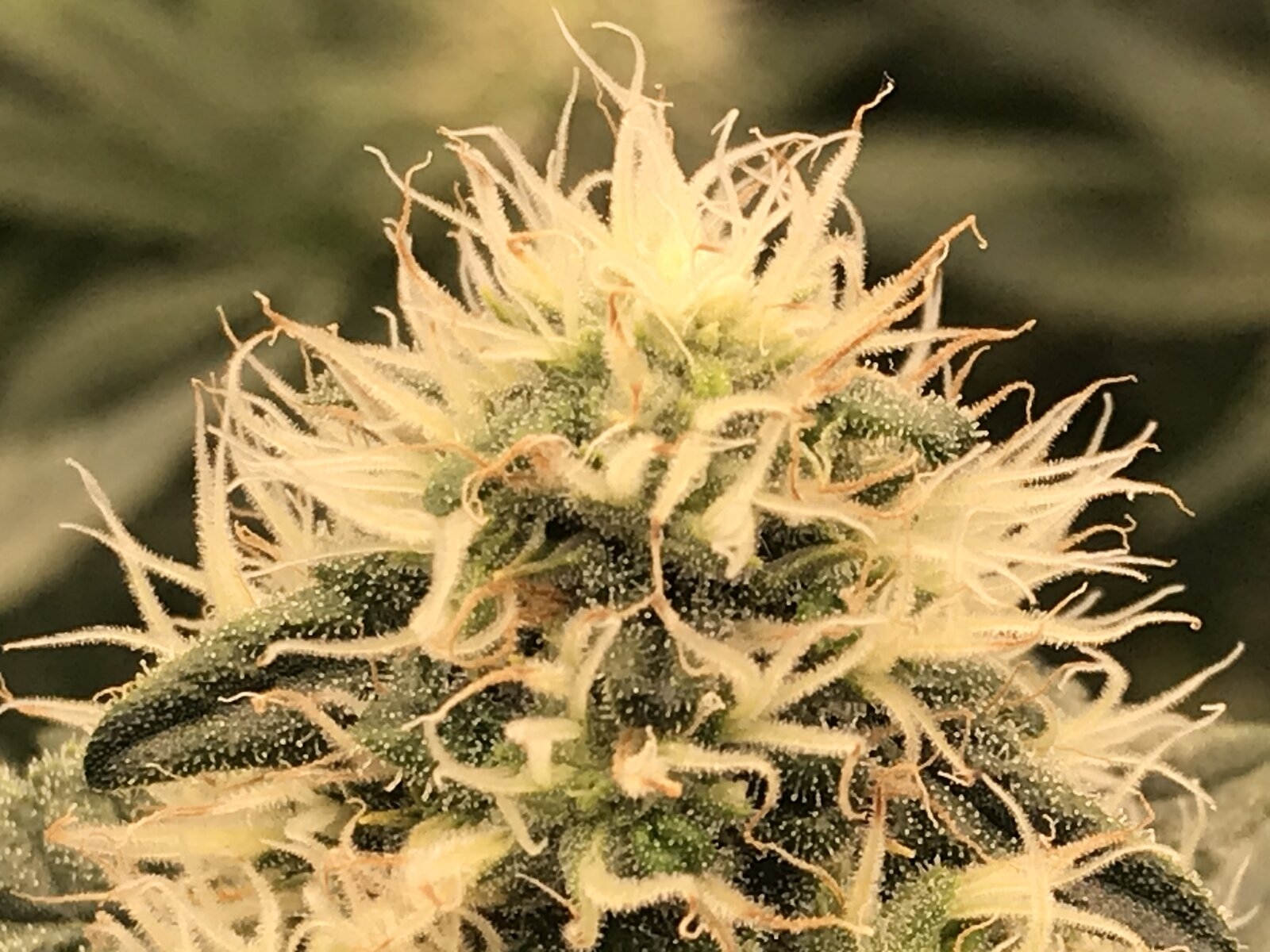