My Glass: it ain't new, or in perfect shape, but I like it

I got this color-changing Sherlock a while back from a friend who was going to throw it away due to having a broken bowl. I said fuggit, I'm broke, I'll take it, throw a screen in there, and use it, as I had no glass, or pipes, other than one I rarely use, made of clay by your's truly, and fired by a Native American lady who's since passed. Anywho, because the bowl has a chip out of it at the bottom, the smoke takes a clockwise circuit around the inside (as you're looking down at it while hitting it), before wafting up the stem. I was never able to see this before cleaning it, as it was a dark blue/green when my friend gave it to me. Well, he gave it to me between 3 and 4 years ago, and I finally decided to clean it the other night. I used a ziplok bag, a bottle of 70% isopropal alcohol solution, and a bunch of table salt. Shook the shit out of it for several hours, but she came out pretty damned nice. I actually found the missing piece of glass inside, which was stuck in resin, lol, but was able to carefully pick it out without breaking the bowl further. It was about the size of my little finger's nail. Hoping to color this in myself now. 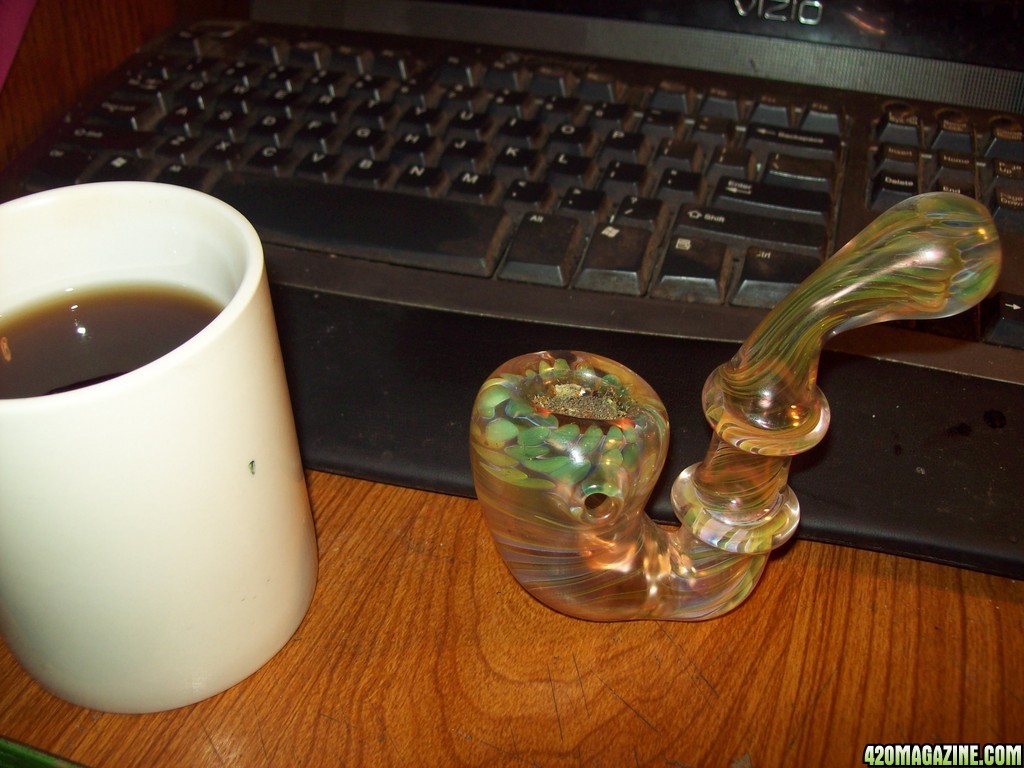 Dude, I love that bowl. So pretty.
No great thing is created suddenly -Epictetus

I dig the fuming on that that one!
American Made Local Glass. Fast, Discreet Shipping to all 50 states!

You mean the gold fuming during it's molten birth?

It lends a very pretty color, even before she's goo'd up. :bigtoke:
Sixth Journal, Bagseed, Indoors, LED, SCROG - Completed and after a 2-zip harvest, mostly forgotten

That is an awesome piece. Looks like something Gandalf would puff on.