For more than six years, the federal government watched quietly as Harborside Health Center grew to become the nation's largest medical marijuana dispensary despite knowing that its operations were illegal under federal law.

Those years of inaction could now become a central issue in a federal court action in which the federal government is seeking to seize properties in Oakland and San Jose from which Harborside sells marijuana to patients.

In a drastic change of policy last summer, U.S. Attorney Melinda Haag began federal civil forfeiture proceedings against two landlords who lease property to Harborside arguing the government has the right to take the properties because they house illegal drug businesses.

Haag's decision to seek the properties sparked a precedent-setting legal battle that resulted Thursday in two landlords, the city of Oakland, Harborside and the federal government arguing before a judge about whether the business should be allowed to continue to operate while the forfeiture actions move through the courts.

Unable to win state court approval to evict Harborside from its properties, landlords from the dispensary's Oakland and San Jose locations asked a federal judge Thursday to order the business to immediately cease operations.

The property owners, Ana Chretien in Oakland and Concourse Business Center in San Jose, claim that the only way they can avoid the risk of losing their properties to the federal government is to force Harborside to stop selling medical marijuana. And the only way they can stop Harborside from selling medical marijuana is to get a federal court order, the landlords' attorneys argued.

"We have no other recourse to stop the illegal activity," said Arthur Hartinger, an attorney representing Chretien.
But Harborside and the city of Oakland contend that there is no need for Chief Magistrate Judge Maria-Elena James to act on the immediate request. Instead, attorneys argued, James should allow Harborside to continue operating until she hears arguments and makes a decision on the federal government's forfeiture case.

If the federal government waited six years to take action against Harborside, the attorneys argued, allowing the business to operate few months longer would not hurt. Forcing the dispensary to close, however, would create harm to medical marijuana patients, Oakland public safety and to Harborside, they said.

"If they government had immediacy, they would have moved sooner," Chao said. "There will be a public safety crisis; there will be a health crisis."

Traditionally, landlords seeking to evict tenants do so through the state court system where a landlord must prove that a tenant has broken the terms of the lease.

Chretien and Concourse Business Center attempted such a move earlier this year and both sued Harborside in state court claiming the dispensary violated the terms of its lease by conducting an illegal business.

But so far, state courts have failed to award an eviction to the landlords because both knew that Harborside planned to distribute medical marijuana and doing so under California law is legal.

James did not indicate when she would make her ruling, only saying that she will do so "as soon as possible." 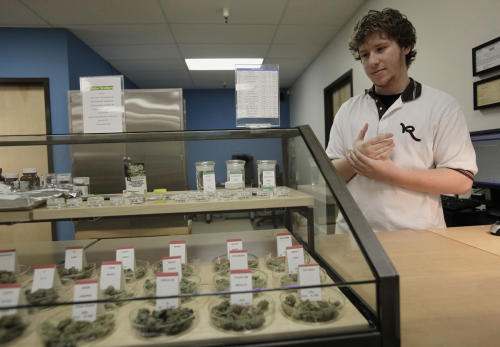