York County Sheriff's initiation a traffic stop on Interstate 80 on Thursday the 20th, and were surprised to find 60 pounds of high-grade marijuana being transported by an elderly couple.

80-year-old Patrick Jiron and 83-year-old Barbara Jiron were in the car when it was pulled over for driving over the center line and failing to signal.

When deputies approached the car they said they smelled the strong odor of raw marijuana.

Canine units were called and investigated the car giving deputies probable cause to search the vehicle.

The marijuana was found in boxes inside the pickup topper.

The couple said they were from Clearlake Oaks California and were headed for Vermont.

They told police that the marijuana was for Christmas presents.

The couple are currently in custody at the York County Jail on charges of possession of marijuana with the intent to deliver and no drug tax stamp. 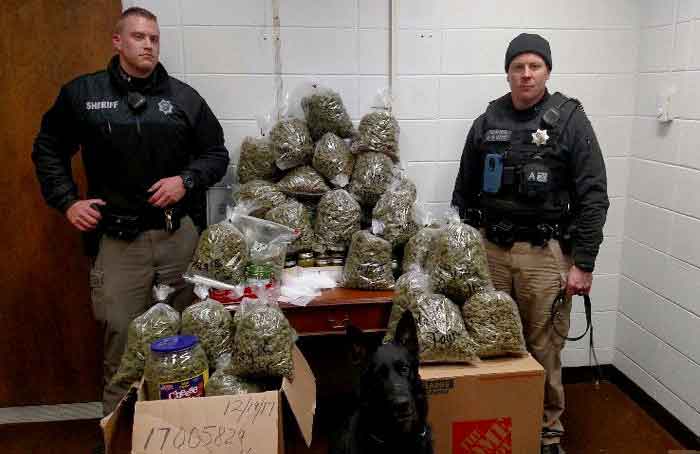 I had no idea "marihuana" tax stamps were still obtainable XD.

Don't worry though, if that piece of whale shit sessions has his way in a week we will all be at risk ASAP.
I feel horrible for those people but it IS technically illegal to transport over state lines. Vermont might be going rec soon, but it isn't YET.

The sad thing is these elderly people are the growing FACE of MMJ and legal cannabis, so this could play in the favor of sick people everywhere.

F the PIGS!
I am from MA and ALOTS going on since we passed legalization. And nothing bad. What REALLY infuriates me though is these sheisty lowlife careless dick politicians and prohibitionists apparently agree states have the right to ban a substance or thing at will yet when it comes to cannabis that just can't stick. some BS there.

Good luck to those people. Sessions now has his poster subjects for why cannabisbs is so "evil". Grandma and Grandpa are evil violent drug traffickers corrupting their family with their medicine.

One thing I WILL say is they NEVER should have said "giving any away". I know most older people wouldn't even think of that. As they believe still cops care about them and their safety.

Pigs care not for us. Just themselves. It's sad as hell.