First time grower here. The plants are autoflowering feminized and seem to be very healthy. They are in the flowering stage and are coming along nicely, except all the plants I see online seem MUCH bigger and the buds seem much larger. My plants seem really short, not even 2 feet tall. Can you experts out there take a look at my plants and let me know what might be the problem and if there is one how I could fix it in the future? 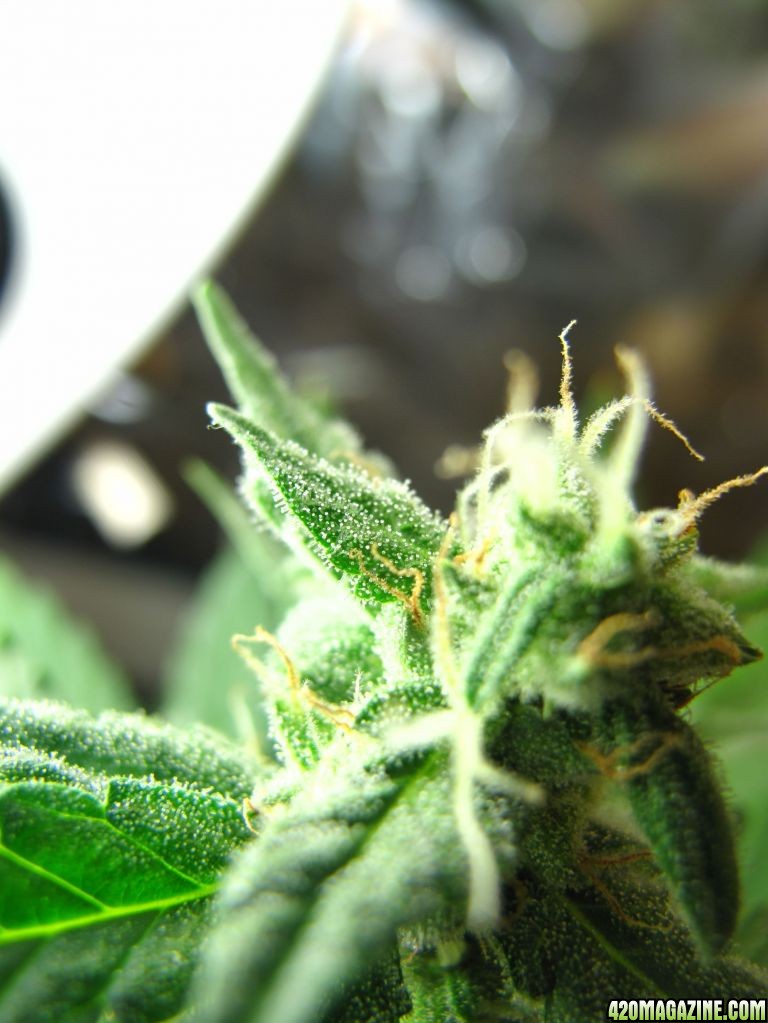 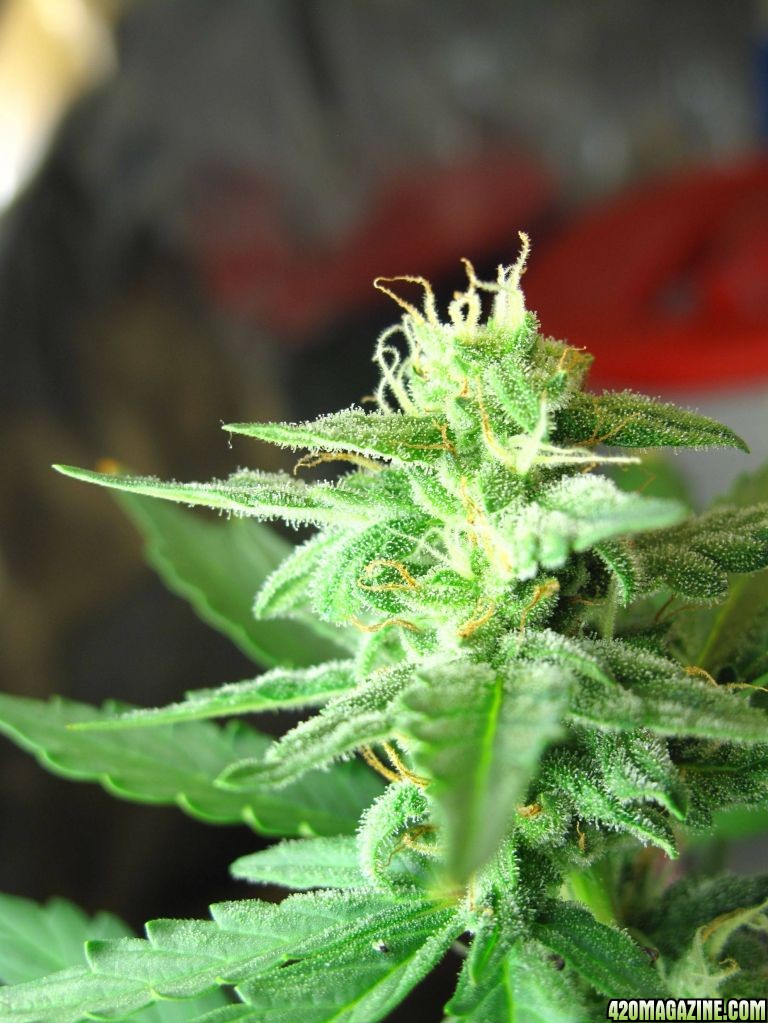 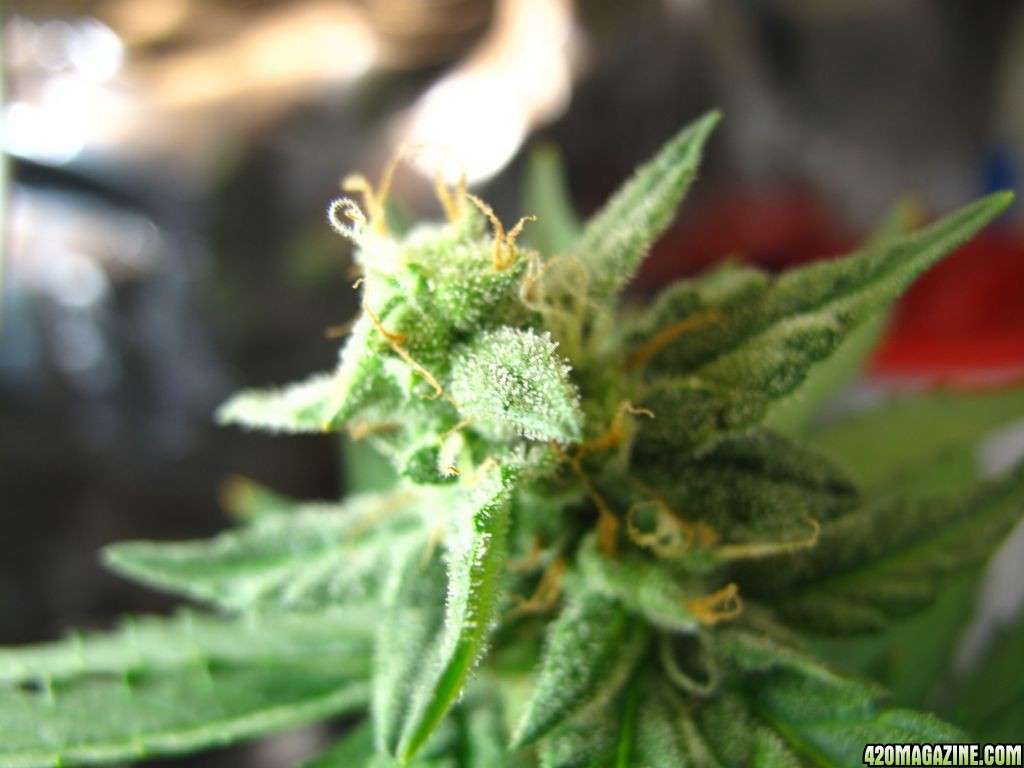 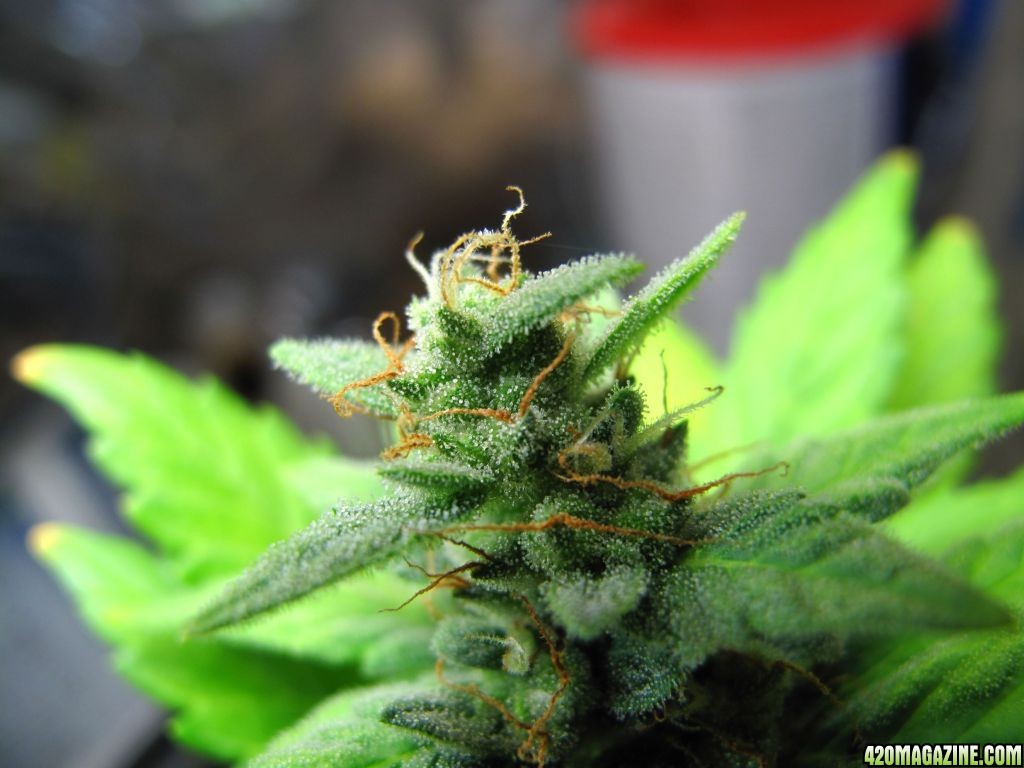 There is alot of good info here and some good folks that would like to help but you need to give us more info. Light's nutes, etc... dozens of factors involved. Tell us everything that you did, we can then try to help.

Jonny
Check out my continuous grow journal here! Stilletto Soilless
Friends are like toasters- if you throw them down the stairs they wont make you toast anymore.
"Although we can not save the poor from thier lot, we will be judged on how we treat the least among us."

The height of the plant matters not, that has more to do w/genetics and when you started them into flower!

Also, it would be nice to see more than a smallish (no pun intended) piece of a flower!
Forum Guidelines

The way I read this is not as a expert but as someone that takes lots & lots of pictures...
your plants are fine and your pics are cool too...
2 feet tall for a auto is not bad, all so.
The buds size, we shoot close-ups and some come out bigger then they really are and some people do it with the plant pictures all so...
You can pick them out by the way they look as you already noticed...

I came here to chew bubble gum and kick ass...

Ok. So, I can't explain what strain these are, as I had a mass death in the beginning of my grow and lost track(resulting in the death of 5/8 of my original seeds)...but it is likely one of these 4, which were what I purchased originally:

At any rate, these were seeded in peat seed starters and put under a humidity dome. They were quite healthy to begin with but I believe I started nutes too early - as I referred to earlier with the "mass death." Many of them turned yellow and could not be saved. I realized my error quickly though as I was able to save these three and yield some fairly healthy plants. The one which is too short is pictured below. I have them under two 2'foot flouro tubes, and 4 CFL's. I also had a root heater as this grow was started in the winter and I wanted to maintain temperature - I have dont a pretty good job of keeping a temperature constant of between 75-90 degrees F. After I realized the nute error, I fed them only water for the duration of the grow until maybe 2 months into vegetative, then only 1/4th the amount and once or twice a week.

Two of the three plants I am not concerned with, except for that the buds do not seem so large...it is the one in the middle next to the wine bottle. It is the one pictured in the beginning of this thread. It looks like it has very nice trichome growth but it is SO short, and the leaves are starting to turn yellow. 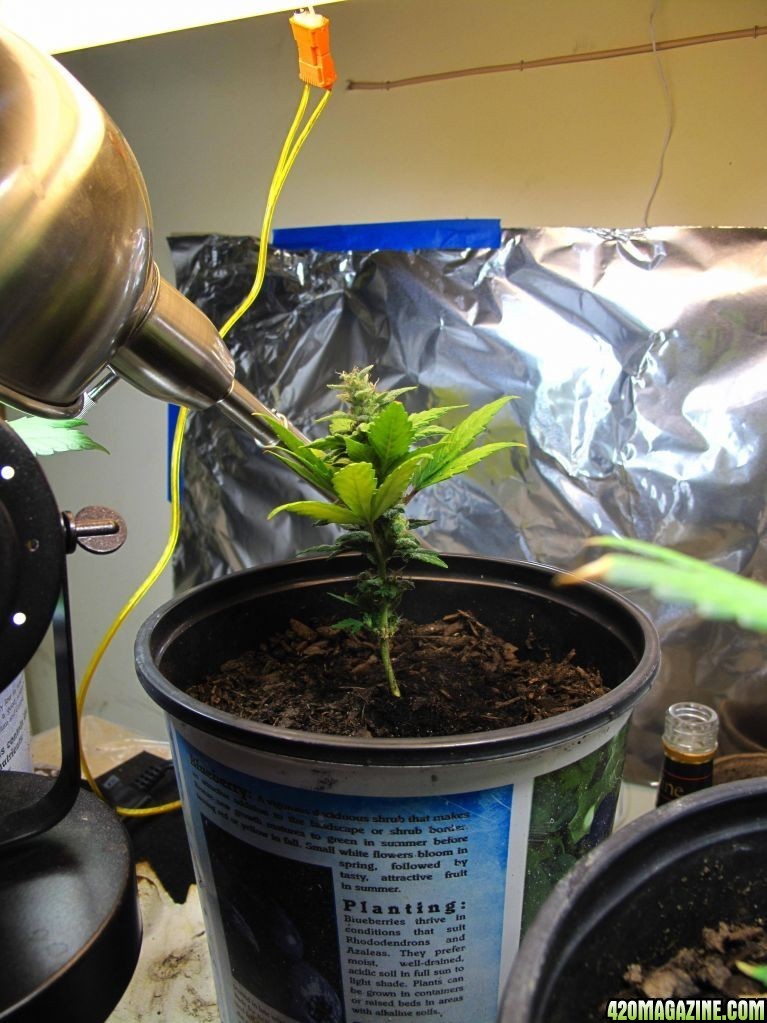 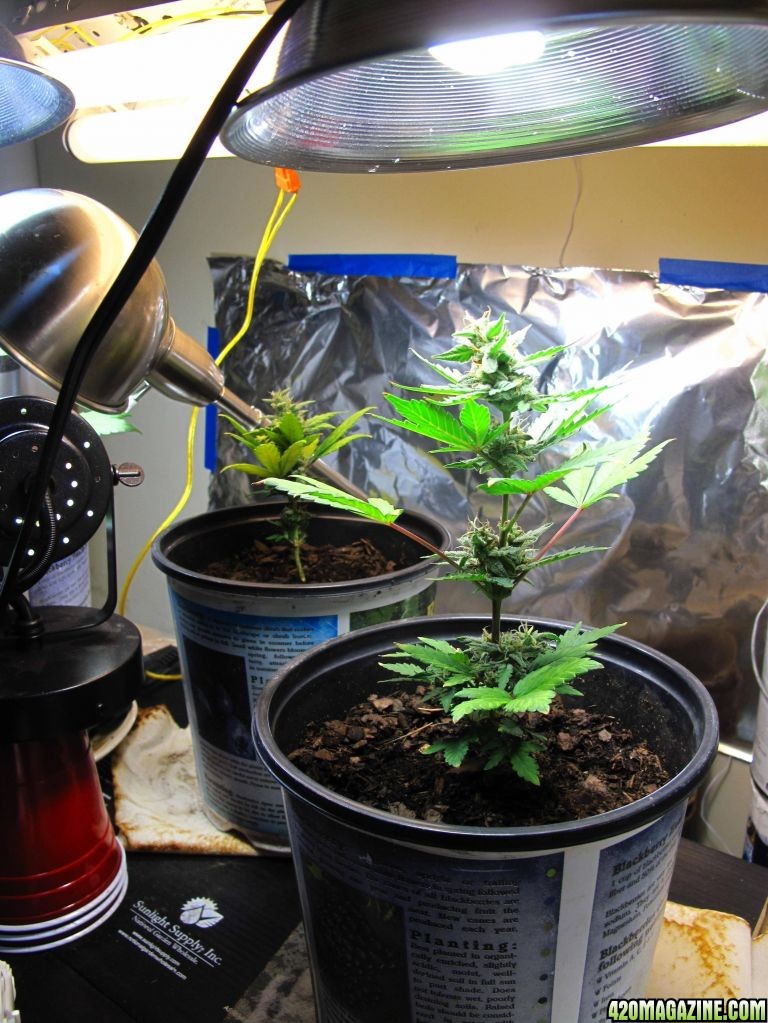 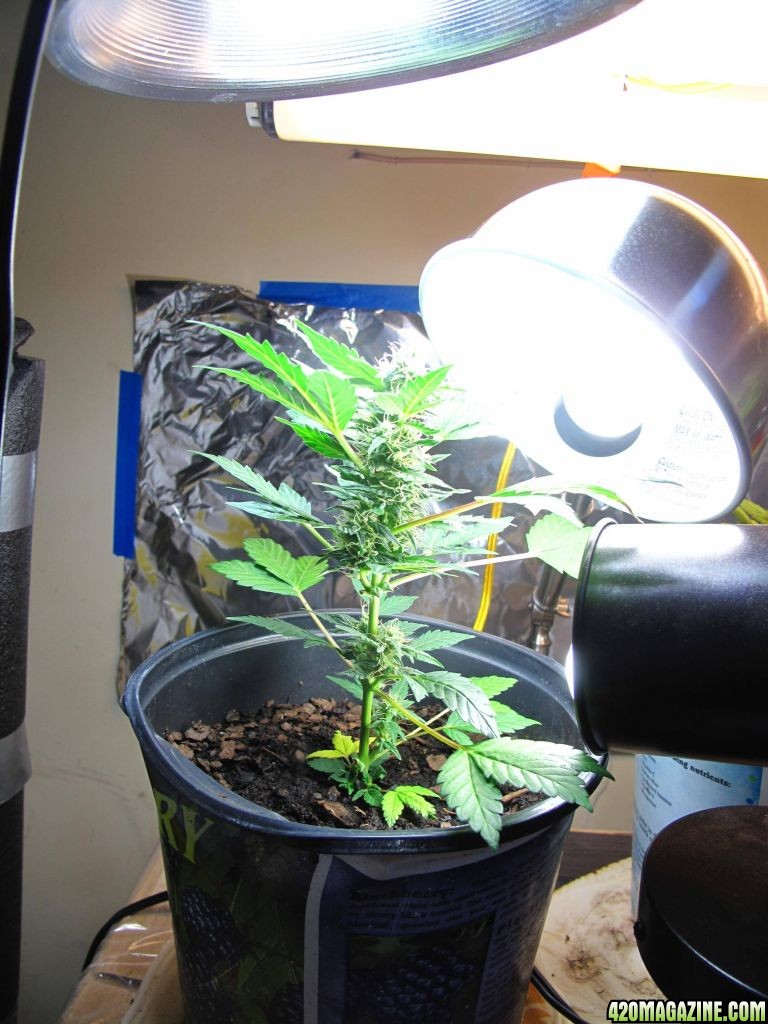