Neighbors 'Had No Idea' Marijuana Company Was Next Door

Behind closed blinds in a storefront on the corner of Main and Mercer streets in downtown Hightstown, an illegal marijuana manufacturing business operated silently and unbeknown to neighbors and business owners.

The unassuming building turned out to be a shipping center for a nearly $1 million medical marijuana company called CannaSence, according to the Mercer County Prosecutor's Office.

It wasn't until fire crews responded to an alarm at Castle Consulting, LLC, the storefront on the 100 block of Mercer Street last week that police knew what was inside, the county prosecutor's office said.

Fire crews weren't met with flames, but the strong smell of marijuana.

"We had no idea anything was going on," said Scott Gaffney, an employee at Perritt Laboratories, across from the building. "Nothing seemed out of the ordinary."

After searching the store, officers arrested Neil E. Schloss, 46, of Millstone Township, for possession of 80 pounds of bulk marijuana and more than $900,000 in edible marijuana products, including hemp gummies, pretzels, and even dog biscuits, all laced with THC, or tetrahydrocannabinol, a chemical in marijuana.

Officials said they also found thousands of dollars of profits in bank accounts on Oct. 19.

Schloss is listed as a certified public accountant (CPA) and the president of Castle Consulting, LLC. The county prosecutor's office said in a statement that Schloss is also the owner/operator of CannaSence, prosecutors said.

A week after Schloss was arrested, and one day after news of the seizure was released to the public, many neighboring business owners and employees in downtown Hightstown were shocked to hear they'd been working next to a shipping center for a nearly $1 million marijuana operation.

Gaffney remembers leaving work last week when a few people were talking to a police officer outside the storefront. He didn't think anything of it until he heard an employee had been arrested.

That sentiment continued for employees down the street at Hightstown Pharmacy. Katherine Jimenez, a student who works part-time at the pharmacy said she didn't pay too much attention to the consulting firm down the street, and was used to the town being quiet.

"It's usually quiet here but there's been a recent uptick in things," she said.

Jimenez talked about a recent robbery at Hightstown Liqour and Wine Store, and the robbery of the Wells Fargo branch ATM across the street.

"But other than that, people tend to stick to themselves," she added.

An employee at a check cashing and loan service next to Castle Consulting, LLC told NJ Advance Media that Schloss was formerly his CPA and he thought of him as a good guy. No one had been by the store since the arrest, he added.

He said he heard details of a large presence of police near the storefront, and saw inklings of the story on social media, but shock didn't settle in until yesterday, when rumors were confirmed by the prosecutor's office.

"It's probably a shock to about 99 percent of the residents in Hightstown, especially myself," Mair said. "This town can't seem to get a positive leg up."

Schloss was charged with maintaining and operating a marijuana manufacturing facility, and various possession charges. He was released from custody Wednesday, pending trial appearances.

Prosecutors originally filed to detain Schloss pending trial, but withdrew that request in court Wednesday and consented to his release, with several conditions, including prohibiting him from using any medications without a prescription. 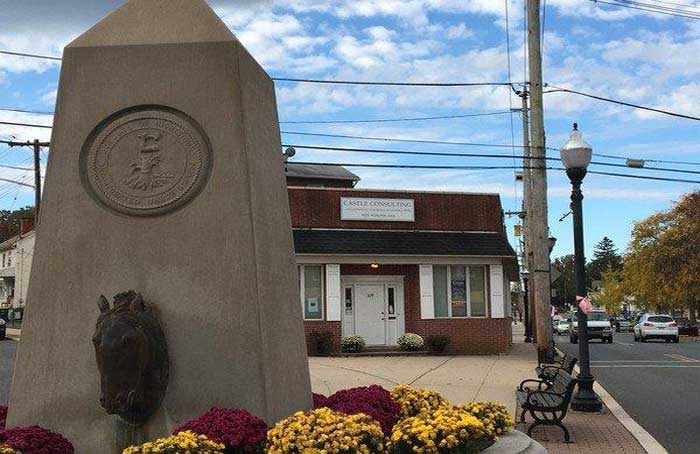