So I finally went to Nepal for a week long holiday. This being April, I was aware that we might not be too lucky with the availability of smokes.

Landed in Kathmandu and headed out to the hotel in Thamel.

After the check in, we went for a stroll through the streets of Thamel.

I passed a Pipe Shop (named the Bong House) and stepped in for a look. As soon as I stepped out, a gentleman walked by me whispering the magic word. We had a chat and settled on me purchasing a tola (10 grammes).

Smoke Report - The hash would melt very quickly and had a very piney smell to it. After heating and mixing it up with some tobacco, we proceeded to light one up. The rush was instant and cerebral (no body high at all). But the high lasted only about half an hour and then we would have to smoke up again. Obviously, this was adulterated stuff but it did the job - for the moment.

After a couple of days we headed out to Pokhara. Rented a car and headed out into the mountains. Highly recommend that everyone does this atleast once. Just to give you freedom to stop wherever you want.

We did make a few stops to chill by a couple of rivers and to also stop at a traditional Nepali fish joint - a non-touristy place.

Saw a few plants growing by the side of the restaurant as well.

After we ended up in Pokhara, I donned my advertising shirt (shirt with a marijuana message on it) so that dealers would know to approach me.

Within 15 minutes, I was chatting with a dealer. Who soon provided me with 5 grammes of hash.


Smoke Report - The hash was very similar in appearance, smell and reaction to heat (how quickly it would melt) as the Kathmandu hash. However, the high was much superior. It came on slowly and would build up to an awesome mind high (awesome to watch some comedy to). The high would last about 1.5-2 hours. Some really good stuff this.

Of course, I finished up the full 5 grammes.

Time to head back to Kathmandu away from the peace and beauty of Pokhara.

Was back in Kathmandu for the last 2 days of the trip.

Went back to the Bong house to buy some pipes for a few friends back home.

Got chatting with the salesman and we established a bit of a rapport. The topic of procuring hash was broached and he offered to sell me some hash and some pollen. About 5 grammes each.

Smoke Report - The hash was some seriously good quality. A mind high that hit like a ton of bricks with a mild body high as well. But the cream of the crop was the pollen (sorry no pics of the pollen block - we ended up crumbling it before I could take a pic). We crumbled the pollen by beating it gently. Then mixed this into tobacco and smoked it. First impressions were the smoothness of the smoke, the high came on slow and peaked in about half an hour. The high lasted about an hour and a half but was a perfect combination of mind and body high.


Summary - It is very easy to score in Nepal, however, be aware that the quality can be a bit hit and miss. Pollen appears to be the better of the two.

Pics: first pic is Kathmandu Hash. Second are plants on the way to Pokhara and third is crushed up pollen. 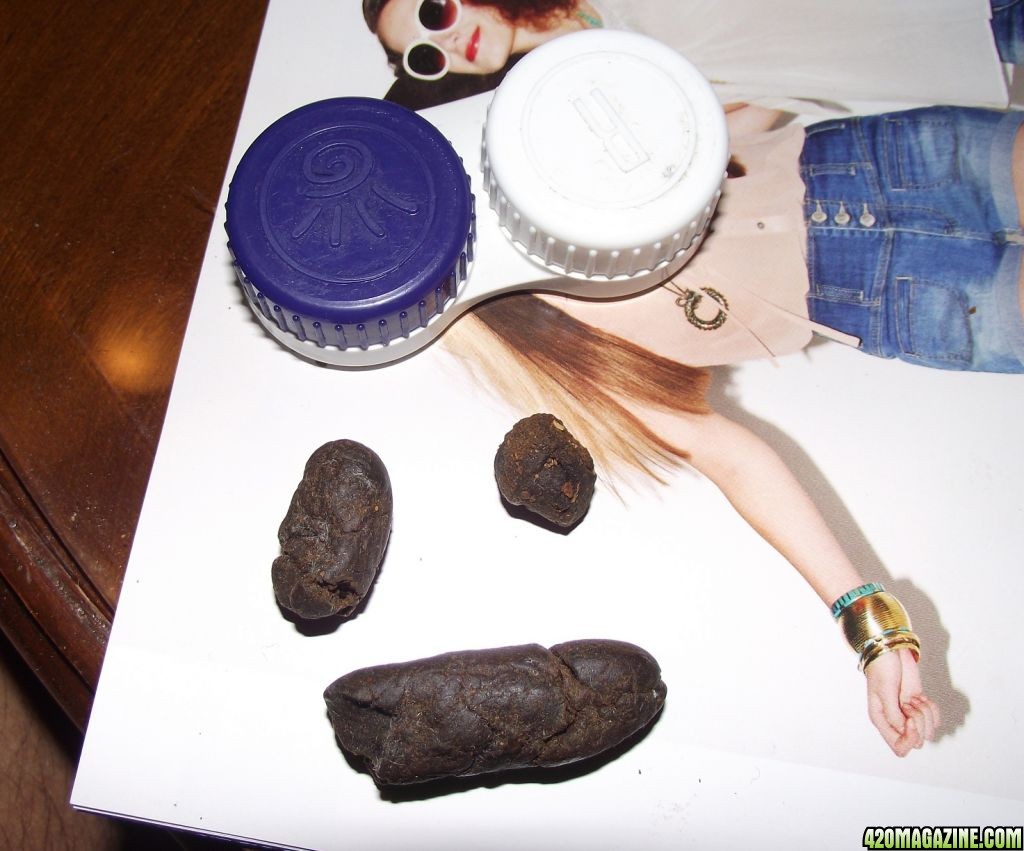 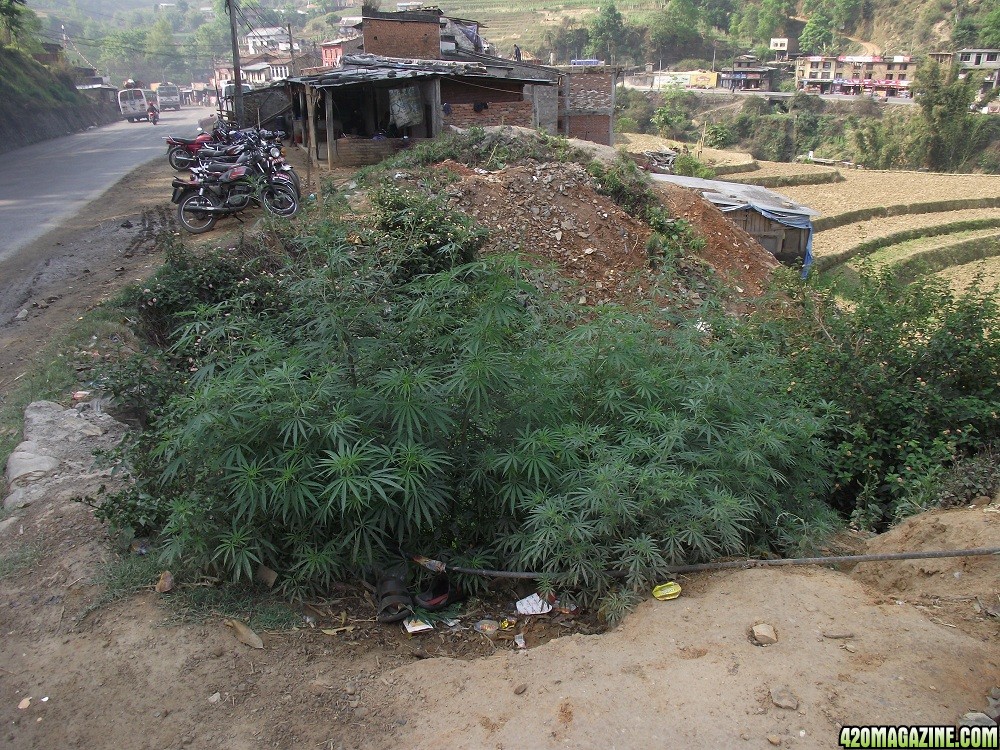 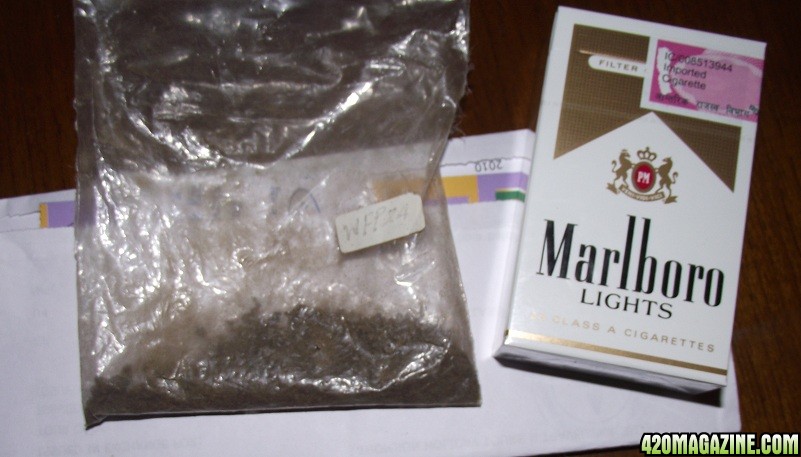 Unfortunately, I left Kathmandu yesterday... I do plan on going back there in october to do some Ganja Trekking....
Last edited by a moderator: May 20, 2011

aite man october is the time when them plants start to bud too, so u will have some good pics to click...
"excuse me while i light my spliff,
oh god i got to take a lift." bob marley

I'm coming to Nepal (Kathmandu) with my boyfriend in early June! =)

Also, when we get there we want to buy the best stuff, of course for reasonable prices (I'm actually hurting on money.. but I can't pass up this opportunity..) So I heard that the "temple balls" (charas, right?) are the best. How do you figure out if its the hand-rolled kind? (thats the better one, right?) And what are the going prices for those.. the going price for locals, that is.. not for foreigners

nepal has a lot of cybercafes...
Last edited by a moderator: May 20, 2011
"excuse me while i light my spliff,
oh god i got to take a lift." bob marley

nirakar said:
i tried sendin u a private message but it said i cant.. ..
Click to expand...

haha I'm so new I can't even post a visitor comment on my own page! In response to your comment, haina, ma nepali haina. ma American hu. (Did I say that right? lol I actually spent today trying to learn how to say a few things in Nepali =P)
Last edited by a moderator: May 20, 2011

nice, so you make em yourself do you? very cool. so i heard the crops in nepal have 3 harvests a year, any of them close to now? Man it'd be so cool to learn how to make those! It must be so rewarding, when you smoke stuff you made with your own hands!

SweetGreens said:
nice, so you make em yourself do you? very cool. so i heard the crops in nepal have 3 harvests a year, any of them close to now? Man it'd be so cool to learn how to make those! It must be so rewarding, when you smoke stuff you made with your own hands!
Click to expand...

man that sounds amazing... how far from the center of kathmandu are you?
Last edited by a moderator: May 20, 2011

Any update on your trip to Nepal? How was it? How were the smokes?
B

Are you still in Kathmandu?