There are application deadlines, zoning restrictions and moratoriums that stand in the way, not to mention that banks are avoiding the medical marijuana business altogether. Last year, the Nevada Legislature overwhelmingly approved a bill that would allow for 66 medical marijuana business licenses, with 40 in Clark County. As many as 425 applications for services from growing facilities to dispensaries are expected. Because of the tourist draw, an ideal location might be near the Strip. But the Clark County Commission prohibited any dispensaries in the gaming corridor. That stretches from St. Louis Avenue to St. Rose Parkway along Las Vegas Boulevard and 1,500 feet east or west of the median, as well as property around Wynn and Encore.

So how, exactly, does one enter Nevada's medical marijuana market? Under the law, four types of medical marijuana establishments are allowed: cultivation facilities, dispensaries, production facilities and independent testing labs. Clark County's intense application process looks like this: Preliminary review forms are due Tuesday. The deadline to submit an application for a special-use permit is May 2, and the deadline to submit a copy of a deed or lease, along with a a copy of an FBI background check, is May 9. The commission set hearings for special-use applications on June 5.

From that point, applicants must submit documentation to the state. A state registration certificate is provisional. That means, the applicant must return to the Clark County and apply for a business license. Once issued, then you can open up for business. The Las Vegas City Council has agreed to move forward with allowing cannabis operations. But in January, Henderson passed a six-month moratorium on medical marijuana applications. "For people who have significant funds available, it's not a problem," Gale said. "But it is potentially harder for people who don't have a lot of money. This is a very capital-intensive investment."

Because marijuana is still illegal under federal law, financial institutions are turning away marijuana companies. In February, the Treasury and Justice departments set guidelines for financial institutions taking on medical marijuana clients in states where the business is legal. Banks must review state license applications and look for red flags that could reveal illicit business, as well as file "suspicious activity reports" for questionable transactions from marijuana clients. "If I misreport, I'm liable as a bank," said Bill Uffelman, president of the Nevada Bankers Association. "So I'm putting my license to do business on the line so that you can do business. That's a hard mouthful for bankers to swallow."

Gale expects financing to come from equity investors. Marc Terbeek, an attorney who specializes in medical marijuana regulation, has been vocal throughout regulatory processes in Nevada and California, and he is working on ideas that could ease the flow of money into financial institutions. "The first one that does it is going to be on the ground floor of a green rush," Terbeek said. "That's going to be the financial insitution that will be at the forefront of the industry." One idea is proposing legislation that asks states to set up separate cannabis banks.

Another prospect would establish a labor association for businesses in the cannabis industry. The labor association would set up sub-accounts for dispensaries and those businesses would pay dues to the association, which would do business with a state-chartered credit union. "There's only so far that institutions are going to go to scrutinize their deposits," Terbeek said. Even if medical marijuana funding is available, there's the issue of finding property for the business.

A medical marijuana facility cannot be located within 1,000 feet of a school or within 300 feet of a community facility. In unincorporated Clark County, a production or cultivation facility cannot be within 660 feet of a residential property line. Under state law, the business must be located within a commercial, industrial or overlay zoning area. The owner of the medical marijuana establishment must own the real estate or have written consent from the landlord. "Many landlords don't want medical marijuana establishments," Gale said. "If they do, they could potentially increase the rent significantly because of the demand."

Melissa Waite, an attorney who handles medical marijuana establishment licensing cases for the firm Jolley Urga Woodbury &Little, said landlords may be worried about how a medical marijuana business reflects on other establishments and whether it affects property value. "They're looking to extract a premium from these operators because it is deemed to be a little bit more high-risk than a typical tenant would be," Waite said. The disparity between federal and state law could also spell trouble for medical marijuana business owners shopping for insurance.

"The legal gray area may be the main issue of categorizing it," said Eric Springall, president of the Insurance Agency Orgill Springer. Last month, Jeremy Aguero, a principal with Applied Analysis, pointed to medical marijuana dispensaries as a significant source of revenue for Southern Nevada when he released the 2014 Las Vegas Perspective. "It's like a gold rush out there to get those licenses," Aguero said. "We have a lot of people interested in opening an operation here, and they're talking about investing millions of dollars into those facilities. Though he has not directly studied medical marijuana's potential impact, his company's comprehensive report gauges the economic direction of Clark County. "There's a lot of cash chasing this particular opportunity." 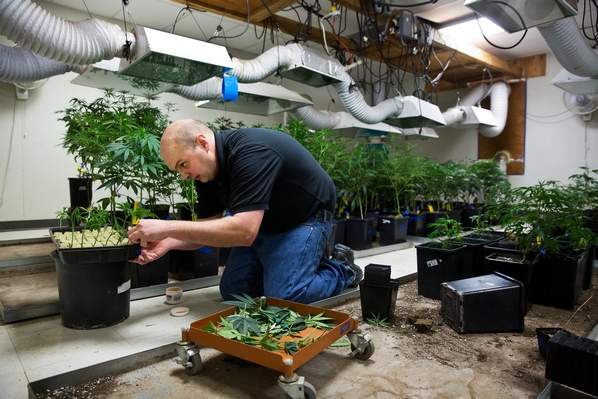