At the stroke of midnight, Nevada will become the fifth state in the country to allow customers to purchase marijuana for recreational use.

About 40 dispensaries that currently sell medical marijuana have received permission to sell pot to adults over the age of 21 beginning Saturday, and a handful are so eager to start sales they will celebrate by opening their doors late tonight.

"It's going to be quite the crowd," said Matt Morgan, the CEO of Reef Dispensaries. The company's 165,000-square foot flagship store, just a block off the Las Vegas Strip, will celebrate recreational sales with a fireworks show at midnight.

State Sen. Tick Segerblom (D), a longtime legalization advocate who helped shepherd marijuana regulations through the state legislature this year, will be the first customer in line at Reef Dispensaries.
Both industry leaders and state regulators expect an immediate influx of recreational sales. The state Department of Taxation anticipates up to $60 million in tax revenues in the first two years of sales.

The actual amount of revenue generated by legal marijuana could be far higher: Initial projections in other states where pot is legal, including Colorado, Washington and Oregon, came in far short of the actual amounts those states earned.

"It's going to make the business boom. I think we're going to see droves of tourists and locals coming in," Morgan said.

Ray Hatfield, a spokesman for the Las Vegas Police Department, said the department does not have any special plans to handle the expected crowds. Possession of marijuana has been legal since January, and Hatfield said the only legal change taking place at midnight will be newly legal sales.

Nevada is one of four states where voters chose to legalize marijuana in November's elections. The other three states – California, Massachusetts and Maine – are taking a full year to create new regulations around legal sales.

But Nevada legislators raced to complete their own regulations by the end of this year's legislative session, relying heavily on state laws in Colorado and Washington. Rules regulating edible marijuana products are identical to Colorado, which initially struggled to deal with the edible market; all edibles will come in 10 milligram doses, with 10 doses to a pack.

And some tourists will struggle to find places where they are legally able to light up. Nevada law does not allow marijuana consumption in the state's casinos or in public. Segerblom has worked on legislation to create "consumption lounges," where those who don't live in Nevada could smoke a joint or consume an edible, though those decisions will be left up to local county and city governments.

"Consumption lounges are in the near future," Morgan predicted.

Other states contemplating changes to their own marijuana rules are likely to watch closely as Nevada and the three others move toward legalization this year. Ballot measures to legalize pot for recreational use are circulating in Arizona and Michigan, and legislators in Vermont, Rhode Island and New Jersey are working on their own legalization measures.

But legalization proponents have experienced a few setbacks in recent weeks. Vermont legislators this month killed a measure that would have legalized pot, delaying any further consideration until January. Rhode Island legislators, too, delayed their own legalization push. 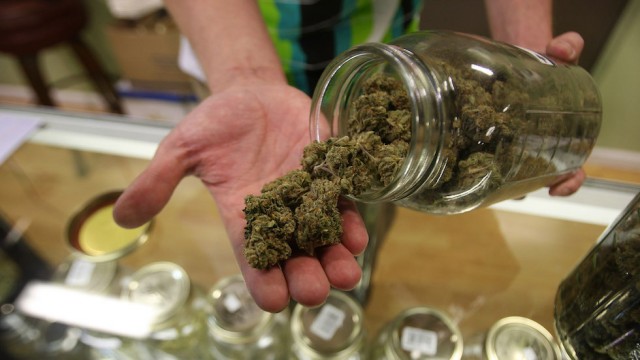 Nevada Adds Legal Recreational Marijuana To Its List Of Sins

Long Lines In Nevada As Recreational Marijuana Goes On Sale

You Can Now Buy Legal Marijuana In Nevada