Some surprising new numbers are out about the Silver State's marijuana industry.

The Nevada Dispensary Association surveyed it's members and now we're getting a better picture of how big the industry is beyond just looking at sales and tax revenues.

State lawmakers from across the U.S. are in Las Vegas for the annual Council of State Governments convention at Mandalay Bay.

The focus of one large session Thursday was how to develop marijuana policies. Based on some of the new statistics about Nevada's industry, we're proving to be a model state.

Nevada has come a long way since medical marijuana sales began in July 2015. Currently, there are 273 marijuana businesses in Nevada employing over 6,700 people.

With sales and tax revenue exceeding projections, it appears the cannabis industry is here to stay.

"There are a lot of taxes coming into the state, but we're also seeing there are extremely high regulatory costs and operational costs," said Riana Durrett, exec. director, Nevada Dispensary Association.

Durrett says while a lot of money is coming into businesses, it's also being paid out.

"This isn't a market where people are making money hand over fist like people from the outside think that they are."

As a whole, the industry spends about $1.8 million on security each month. Utilities comes out to nearly $1.3 million.

But the biggest cost, as in many businesses, is employees. The average wage is $19.28 an hour, more than double the state's $8.25 an hour minimum wage. And it's a diverse workforce -- about 47 percent minority and 53 percent non-minority.

Durrett presented the numbers in front of lawmakers from other states like Maine state Senator Roger Katz who are looking for guidance as voters legalize marijuana in more states.

"Nevada is different from Maine in many, many ways, but the issues about legalization of marijuana, they're really the same," said Sen. Katz.

He sees events like this as an opportunity for states to get out ahead of the any movement on marijuana policy on the federal level.

"This opportunity to talk among our colleagues really does demonstrate that the states are the 50 labs of the country," Sen. Katz said.

Las Vegas is hosting this conference this year because state Senator Kelvin Atkinson is the chairman of the Council of State Governments.

Governor Brian Sandoval will be delivering a keynote address Friday. 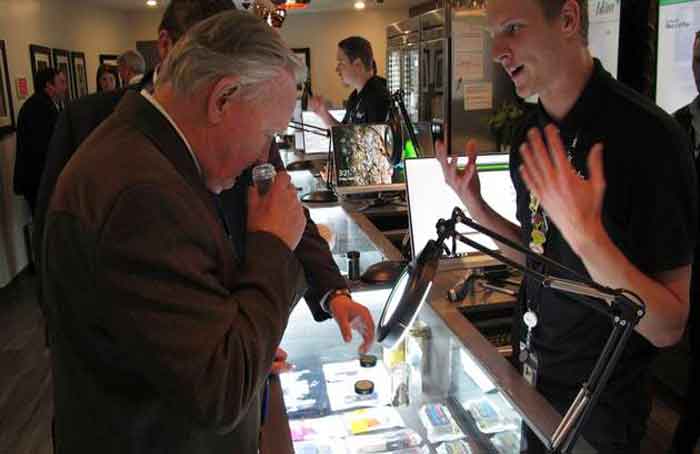 Could Cannabis Be A Tourist Attraction For Nevada