In 2007, Denver voters approved an initiative to make marijuana possession the lowest law enforcement priority for police. Five years later, Colorado became the first state in the nation to legalize recreational use of marijuana. Now that the Santa Fe City Council has voted to decriminalize possession of an ounce or less of weed, advocates for drug reform hope the decision will set off the same kind of ripple effect that will lead to legalization in New Mexico.

Exactly how long it will take or how it will happen remains to be seen, they say, but they believe the foundation has been set. "I'll tell you 100 percent: Long term, I think New Mexico – and not just New Mexico but other states – are going to follow Colorado and Washington's examples," said Pat Davis, executive director of ProgressNow New Mexico, one of two groups that initiated the effort in Santa Fe. "I think it's a matter of when, not if," he said. What happened in Santa Fe reflects a changing attitude nationwide about marijuana, Morgan Fox, a spokesman for the Marijuana Policy Project, said in an email. The Washington, D.C.-based group advocates for marijuana regulations similar to those for alcohol.

"The local decriminalization initiatives in Santa Fe and Albuquerque are indicative of a national shift away from marijuana prohibition and toward a more sensible, non-punitive approach," Fox said. "People are sick of seeing adults face criminal charges that could have lifelong consequences just for using a substance that is safer than alcohol." Despite the success in Santa Fe, a city known for progressive values, the push for decriminalization of pot faces an uphill battle across the state, especially in more conservative areas outside the Rio Grande Valley. Gov. Susana Martinez opposes the idea. And supporters in Albuquerque suffered a setback Friday when Mayor Richard Berry vetoed a measure that would have allowed voters in New Mexico's largest city to weigh in on the issue.

Berry said in a video message Friday that the proposal would contradict state and federal laws, and he couldn't "in good conscience" support the bill. Of more than 600 people who responded to a poll on The New Mexican's website, more than two-thirds supported decriminalization of marijuana. On Friday morning, as he set up his wares on the Plaza for the annual Fiesta Arts and Crafts Market, Roger Kalhoun, a 50-year-old potter from Mesa, Ariz., said marijuana should be legalized and regulated, with penalties for driving impaired, just like alcohol.

"We waste a lot of resources chasing down people that are doing the same things that people do in bars," he said. Legal assistant Merrell Cantu, 31, said he believes eventual legalization would ease crowded court dockets, free up law enforcement resources and take power away from drug cartels. Robin Parnell, a 53-year-old substitute schoolteacher, said she thinks lawmakers should take "baby steps" toward legalization. "They really need to think about the long-term effects, and they haven't done that yet," said the mother of two sons, ages 17 and 26. "People are so concerned about their personal rights, but we have to think about our society as a whole and our young people. We have lost track of that."

With Santa Fe now in the victory column, the immediate focus for decriminalization advocates is Albuquerque, said Emily Kaltenbach, state director of the Drug Policy Alliance, which partnered with ProgressNow to launch the citizen initiative in Santa Fe. "This is just the beginning, and I anticipate we'll see major marijuana reform happen in New Mexico in the next two to five years," Kaltenbach said. The initiatives in Santa Fe and Albuquerque jump-started the conversation statewide, Davis said.

"We've tracked more than 100 news stories about the Santa Fe and Albuquerque marijuana initiatives since we started this in June," he said. "People in Clovis and in Socorro and in Raton have watched more than 100 TV news stories about these efforts and about the back and forth between them," he said. "They're having these conversations, too, and we want to see what that does to polling out there." Davis said officials in other cities, which he declined to identify, want to follow Santa Fe's lead.

"We're looking at a couple of other cities on the map that have really progressive councils that have reached out to us already about how they could do it in their city," he said. Fox said cities like Santa Fe, as well as cities in Maine and Michigan that are considering similar measures, are helpful in developing a dialogue "that will hopefully lead to making marijuana legal and regulated on the state level." "They offer a chance to educate the public and civic leaders about the issue, and, if passed, will allow law enforcement to get used to the idea of interacting with marijuana users outside of the current criminal setting," he said.

Local officials say prosecuting possession of small amounts of marijuana is already a low priority, and it's generally not people charged with less than an ounce of marijuana who are filling jails or clogging the legal system. Santa Fe County Public Safety Director Pablo Sedillo said that of the approximately 500 people who were held in the county jail on the day the City Council voted on the measure, only one inmate was there on a charge of possession of marijuana. Sedillo said less than 1 percent of the approximately 10,000 people who enter the facility each year are booked on marijuana possession charges.

The First District Attorney's Office in Santa Fe doesn't prosecute possession charges involving less than 8 ounces of marijuana, so officers who want to pursue charges on smaller amounts must prosecute those cases themselves, which means appearing in court and sending samples to an already backlogged state crime laboratory. "Most cops will tell you they aren't going to waste their time on small amounts of marijuana," said District Attorney Angela "Spence" Pacheco, because it takes too much time and work to get a conviction that would result in a maximum penalty of a $100 fine and 15 days in jail. 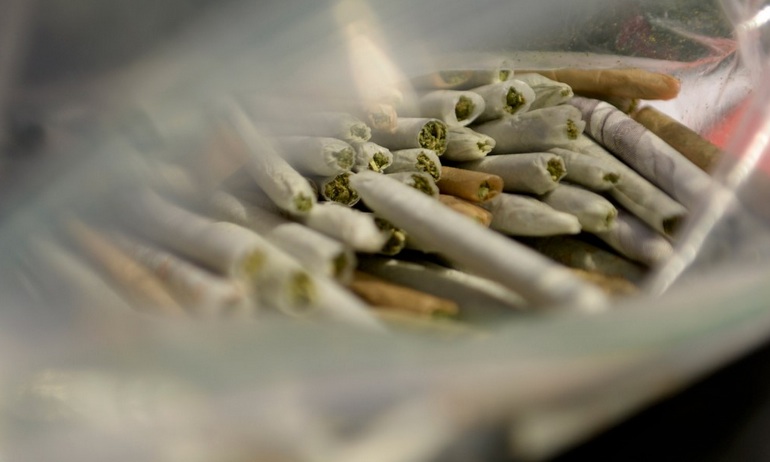