Planning commissioners pushed North Las Vegas a step closer to a medical marijuana ordinance Wednesday, un-animously approving new pot planning regulations set for City Council approval next month. Rules OK'd by commissioners this week put a few extra teeth into the state's green rush land use restrictions, including having a 300-foot proposed buffer zone between pot dispensaries and residential developments. They also pull quite a few teeth out of regulatory schemes recently adopted in Las Vegas and Clark County, where pot dispensaries are required to observe a 1,500-foot setback between nonrestricted gaming establishments and a 1,000-foot buffer between other pot production, testing and cultivation facilities.

North Las Vegas planning manager Marc Jordan opted to drop similar requirements at the last minute Wednesday, in part because they threatened to freeze medical marijuana out of the city's redevelopment district. "We realized we had basically put a prohibition on the downtown area," Jordan said before this week's meeting. "(Medical marijuana establishments) will still have to stay 1,500 feet from the Cannery, the Aliante, the Fiesta Rancho – places which have a hotel component. ... But if they want to be downtown by the Jerry's Nugget, we want to make sure they can do that." Commissioners also advanced North Las Vegas' bid to become the region's pot cultivation capital, rallying around a provision to green-light grow houses without City Council approval.

An 11th-hour regulatory revision drafted by Jordan allows cultivation facilities to move into APEX Industrial Park with a staff-approved conditional use permit, saving businesses from a make-or-break City Council vote on a special use application. That amendment won accolades from multiple business owners and residents in attendance. It earned particularly rave reviews from North Las Vegas attorney and medical marijuana consultant Bruce Gale, who applauded commissioners flexibility on the issue.

"You guys did a great job, especially on the conditional use permit at APEX," Gale said. "You've got a new member in your fan club," he said. City dispensaries will have to close by 10 p.m. – and won't be allowed to operate a drive-thru window. Planners indicated they also will make room for the partial integration of cultivation and production facilities and won't require medical pot shop owners to locate in a stand-alone building. North Las Vegas-bound pot entrepreneurs will have to cut a $5,000 check for city permits, a figure Jordan said is consistent with asking prices in Las Vegas and Clark County. Officials haven't settled on the amount to be charged for pot license fees. They expect to unveil that number alongside a draft medical marijuana ordinance set for introduction June 4. City Council members plan to take a final vote on the city's medical marijuana rules on June 18. 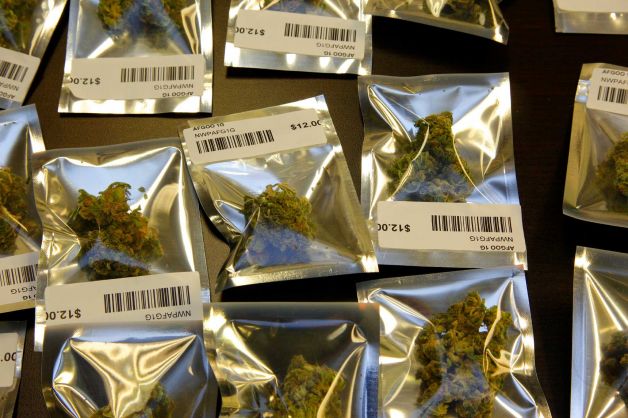