New York has become the 23rd state in the U.S. to authorize medical marijuana — though the state's program is one of the nation's most restrictive. Gov. Andrew Cuomo signed the measure into law Saturday and held a formal signing ceremony in New York City on Monday to highlight the new law. When the program gets up and running in about 18 months, patients with diseases including AIDS, cancer and epilepsy will be able to obtain nonsmokeable versions of the drug.

Instead, the drug must be ingested or administered through a vaporizer or oil base. Cuomo, a Democrat, said prohibiting smokeable marijuana will help keep the drug out of the wrong hands. "It was almost oxymoronic that a health department would operate a program allowing smoking — which they spend a very significant amount of their time trying to stop people from smoking," Cuomo told WCBS 880′s Ginny Kosola. "Second, you don't need the smoking to get the benefits of the drugs."

The compromise was one of the final measures passed by lawmakers in Albany before they adjourned last month. "We have the medical benefits of marijuana," Cuomo said. "We also have public safety and public health concerns that are addressed." Nine-year-old Amanda Houser, of Suffern, spoke at Monday's signing ceremony. She has a form of epilepsy and suffers dozens of seizures every day. For her, medical marijuana could be a life-changer. "I want to be a normal girl, and I want my seizures to stop," she said. Larchmont resident Polly Vanderwouce, whose 3 1/2-year-old daughter, Olivia, has a rare and debilitating form of epilepsy, told CBS 2′s Marcia Kramer the medical marijuana bill signed into law provides a ray of hope that her daughter can live a more normal life. "She's never gone more than two days without having a seizure," Vanderwounce said. "Having a child with severe epilepsy means that you're always on alert and every seizure can turn into an emergency and a life-threatening situation, so anything that helps reduce that sense of fear would be huge."

Under the law, the state will approve and regulate up to five businesses authorized to grow and distribute the drug. The operators could each have up to four dispensaries statewide. "From this day forward New Yorkers will now have access to the same life-changing treatment that other patients across the country have had," state Sen. Diane Savino, D-Staten Island, who sponsored the legislation, said in a news release. "This is an historic victory for the countless health care professionals, physicians, advocates, families and patients who know that the safe and reliable use of medical marijuana is a sensible, compassionate course of treatment for debilitating illness and disease. I stand with the thousands of New Yorkers who now will no longer have to suffer needlessly through their courageous medical battles."

Patients would get prescriptions from physicians approved by the state to participate in the program. Patients who sell their prescribed marijuana could face a misdemeanor. Patients would be required to carry registration cards showing they are authorized to possess the drug and can be prescribed a maximum 30-day supply. The governor could shut down the program if it does not work out. "If it goes bad, these's an escape," Cuomo said. Cuomo insisted the program is not an indication that the state will soon legalize marijuana for recreational use. "I am against legalizing marijuana, and that's not what this is," Cuomo said. "This is medical marijuana." 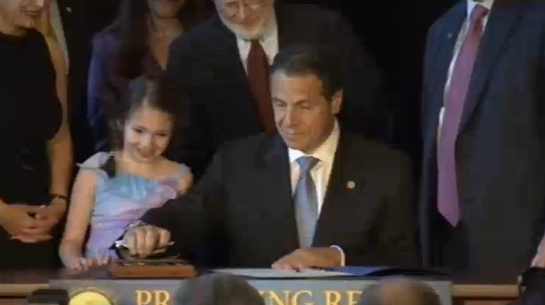