Like Australia, in New Zealand cannabis is illegal and for those who need its medical properties most, it can be almost impossible not to succumb to breaking the law to gain access to the illicit plant. For Paige Gallien, who suffers from Dravet Syndrome which is a rare form of epilepsy, life has been a constant battle. Pagie's illness is so server that mother Kelly said "The information our doctor gave us at the time was that she probably wouldn't live past nine or ten" but to her family's relief, Paige now 11 fights on. Despite her determined will, Pagie still suffers many seizures daily, and the severity of this illness is now causing brain damage.

Paige can be on up to four pharmaceuticals at any given time and the family have tried everything that doctors have offered, but these commonly prescribed medicines simply aren't working. For this reason Paige is the now the first child in New Zealand to be legally prescribed a cannabis extract called Sativex. This revolutionary peppermint spray was developed in the UK by one of the fastest growing cannabis companies GW Pharmaceuticals, "Sativex is extracted from the cannabis plants that have been selected and grown to produce a constant amount of active ingredients" the company says. With no medical marijuana programs currently active in New Zealand, this is the only form of marijuana that the Gallien's have had access to without breaking the law.

Sativex is made under strictly controlled laboratory conditions and contains a balance of the active cannabis ingredients that have been shown to help improve the symptoms of many epilepsy patients across the world. Despite this, the drug is not guaranteed to work for Paige and the side effects that some patients experience have been said to resemble a cannabis high, including increased appetite. Despite the many unknown risks of Sativex, the Gallien's are willing to trial the treatment in the hope of an improvement in their daughter but it is an experimental process and unlike illegal cannabis oil it may have a range of harmful side effects.

Cautiously moving forward with Sativex, the Galliens have seen an improvement in Paige and she has only been administered the drug for less than a fortnight. "when she was sitting on your lap you could feel her twitching and she has completely stopped that, and her speech is a bit clearer and she's listening better, she has heaps more energy." Through the commencement of Paige's Sativex use it will highlight the effectiveness of the treatment. Unfortunately the family fears they may still have to consider breaking the law in order to provide their "wee little girl" with cannabis oil that has been proven in cases like Charlotte Figi, to reduce the symptoms of epilepsy with little to no adverse side effects. 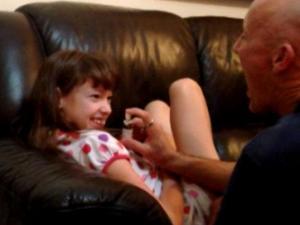 May 17, 2014
The General
T
K
NZ: Hamilton Girl's Cannabis Use No Longer Taboo