I'm currently growing 11 NLX plants (8 outdoor / 3 indoor) which is a clone only and mostly indica strain.

My outdoor plants are already vegging for about 6 weeks, so I'm not going to cover their progress as often because they're already pretty far ahead. But I'll try to give weekly updates on their progress when they start to flower. 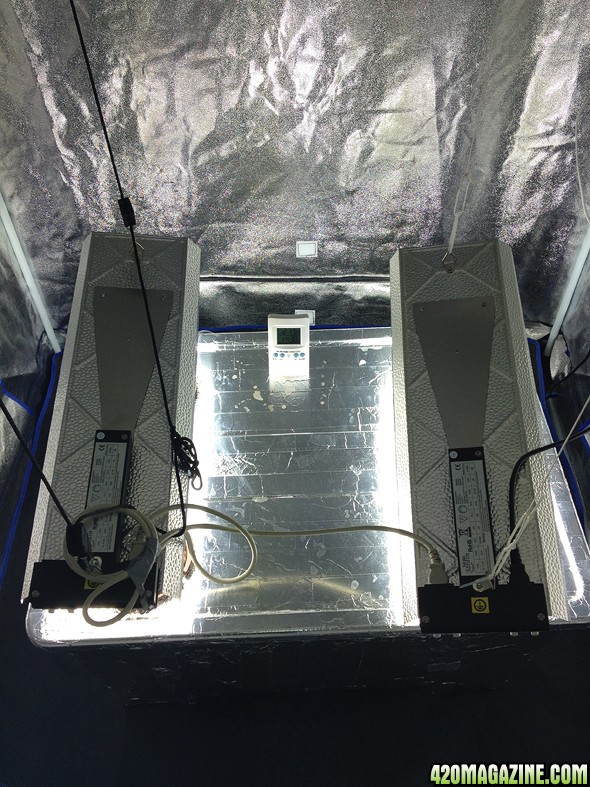 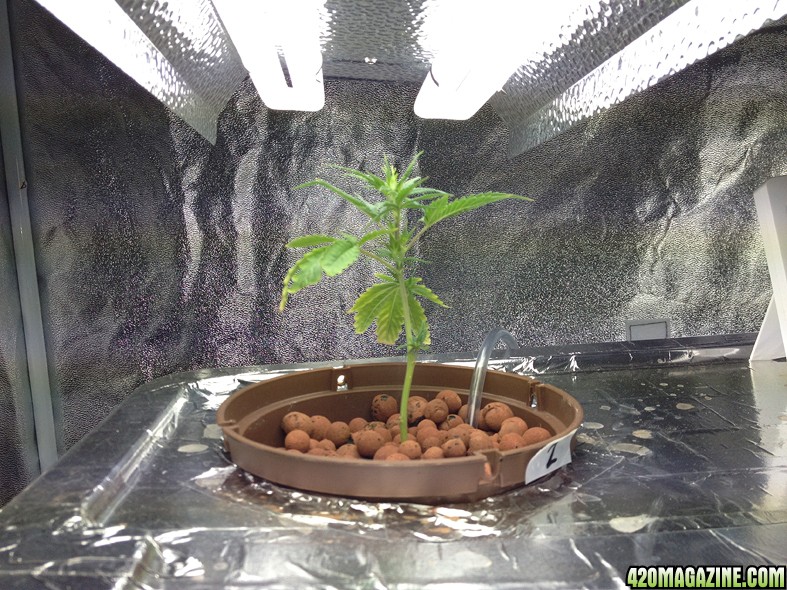 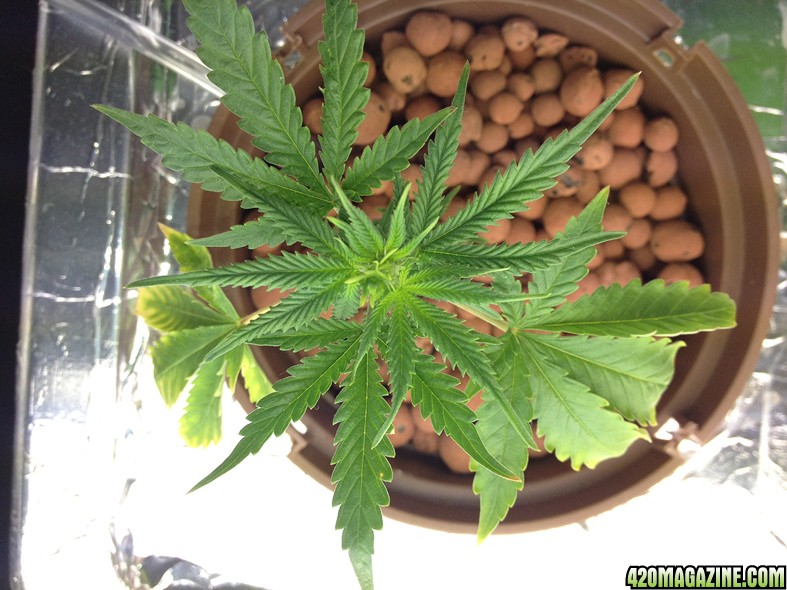 Clone #2 (sorry for the crappy side photo, I had a hard time focusing on her) 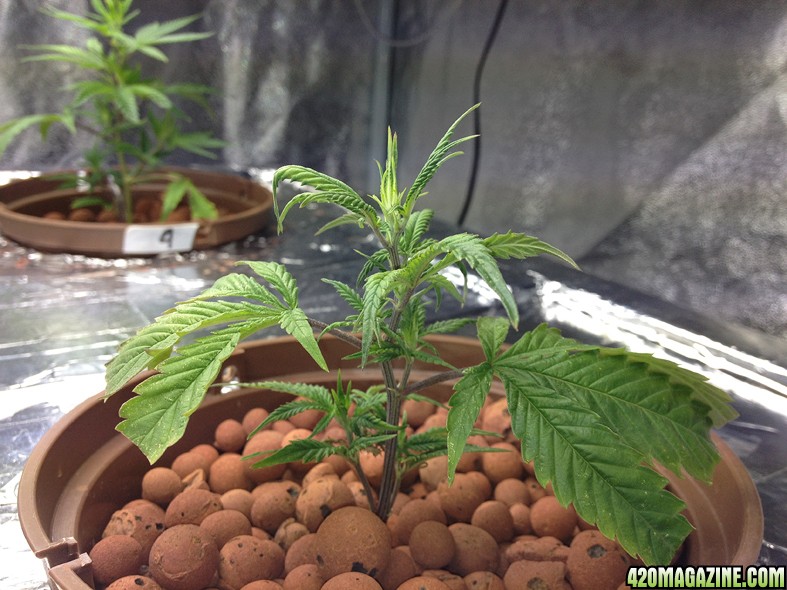 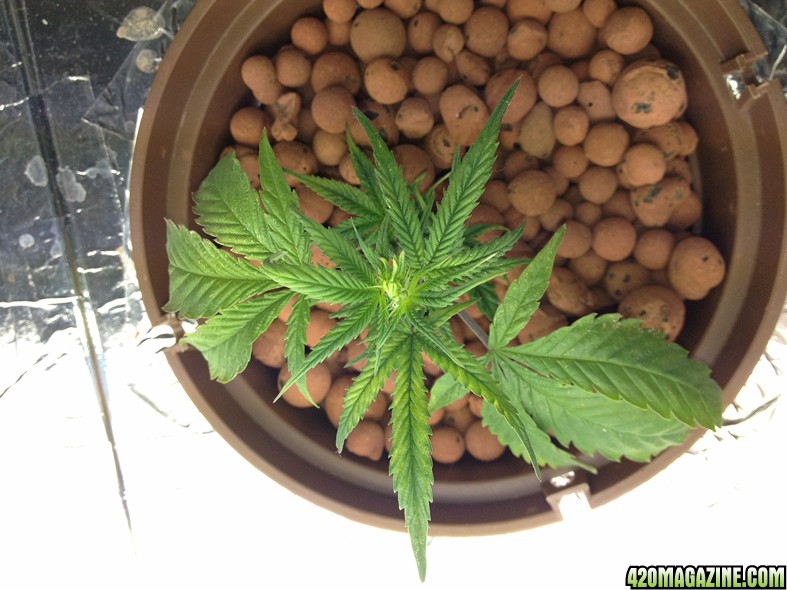 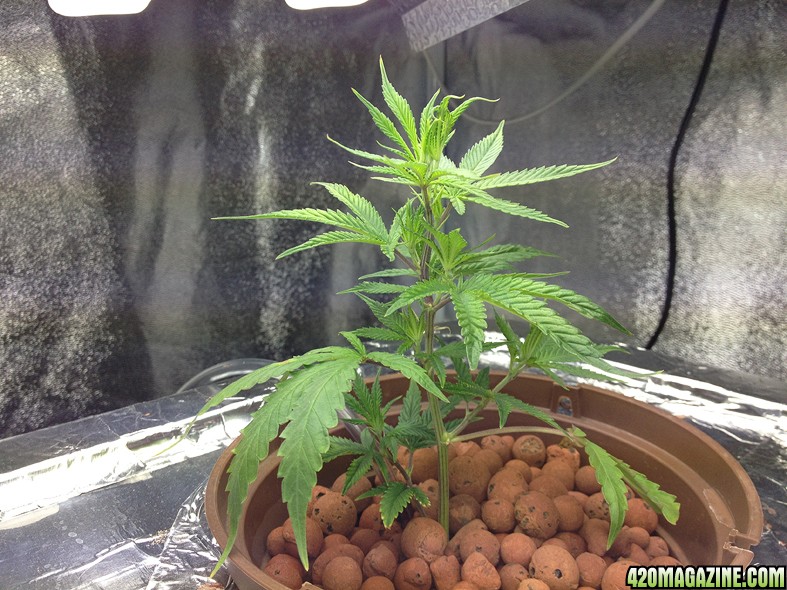 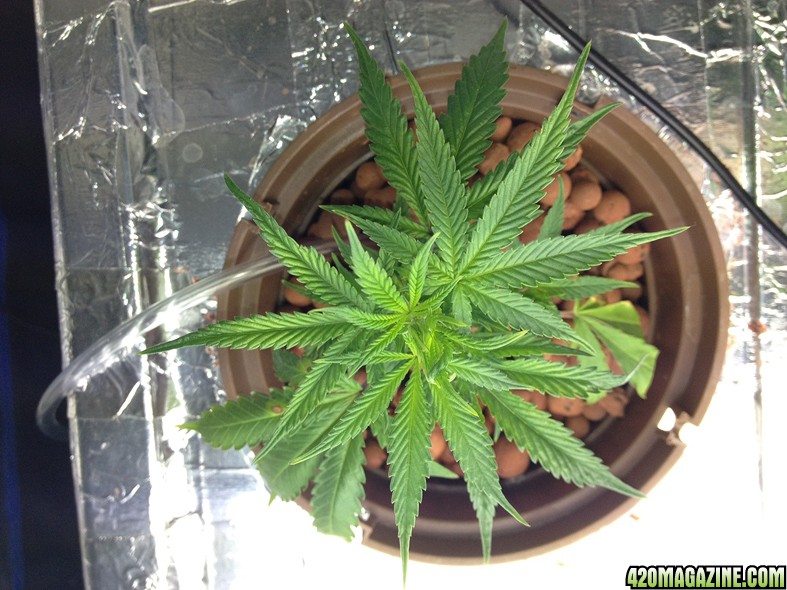 
As you can see, my three indoor plants are quite small and have only been vegging for 1 week. I haven't decided on what to call them yet so I've just simply labeled them 2, 3 & 4. They're rooted in an 130L (roughly 35 gallon) tub from the Ikea with 2 large air stones. There used to be 4 (RIP clone #1

) but one of the plants didn't take to the DWC well and died after about 2 days.

The other 3 seem to be growing fine, however, #2 also had some problems on the beginning and was slow in starting and also stretched a bit further than the other two due to the issues with #1. They seem to be doing fine but are showing signs of stress on their stems, but I'm not sure from what just yet.

The temps in my space average 26-29C and the humidity around 40-45%. I'm using Startbooster from Aptus & Hydro A&B from Hy-Pro. I currently have them under two 75w t5 duo banks from the Tneon series (Secret Jardin) on a 24/0 cycle. I haven't seen many people growing with these so I'm quite curious as to how they'll do. My res PH is 6.7 and my EC reads 1.6. I know my PH is high (it rose yesterday) but I don't have anything to lower it with at the moment. I've heard lemon juice, so perhaps I'll try that.

My IKEA tote DWC is hopefully completely light proof but I should really insulate it better just to be sure. I'm really worried about root rot as the roots are already have a bit of a brown film but that might also be the nutes I'm using because the startbooster is VERY dark and as soon as I poured it in, the water turned dark brown. I also forgot to drill a drain hole so I'm going to have to figure out a way to dump this thing pretty soon haha Any ideas would be appreciated.

So far, these lights appear to be doing a pretty good job. Except for #2, which stretched a bit when I had to pull the light further away from #1 for a couple days, the nodes seem pretty tightly packed on the stem. Right now they seem adequate but I'd like to see how they do during flower. I have a 400w HPS standing by just incase

On to my outdoor plants...

So these ladies have had a pretty rough life so far. They were all planted in one container and left for 2-3 weeks before they came to me. So they were already getting rather tangled together when I had to seperate and transplant them. They first went into 11L pots and from there into the ground. They've been infested with aphids, ravaged by slugs/snails, been made into nests by spiders and have been attacked by powdery mildew. But I will say, they're some resiliant little buggers cause they keep on goin. They're obviously a bit stunted due to their rough younger days but with most of their issues gone, I hope they'll grow nice and big and produce many happy buds for me to roll. ;D

Our summer this year has been rather wet. I've been watering them only once a week to give them nutes because its been raining every day. Yesterday I removed most of their fan leaves... I wasn't sure if this was a good move but I was advised to by another grower so I figured I'd try it. They've managed to survive all of the other things I've done to them so far, so I was curious as to whether it would make a difference or not. I'm hoping it will help them get bushier like he said they would. 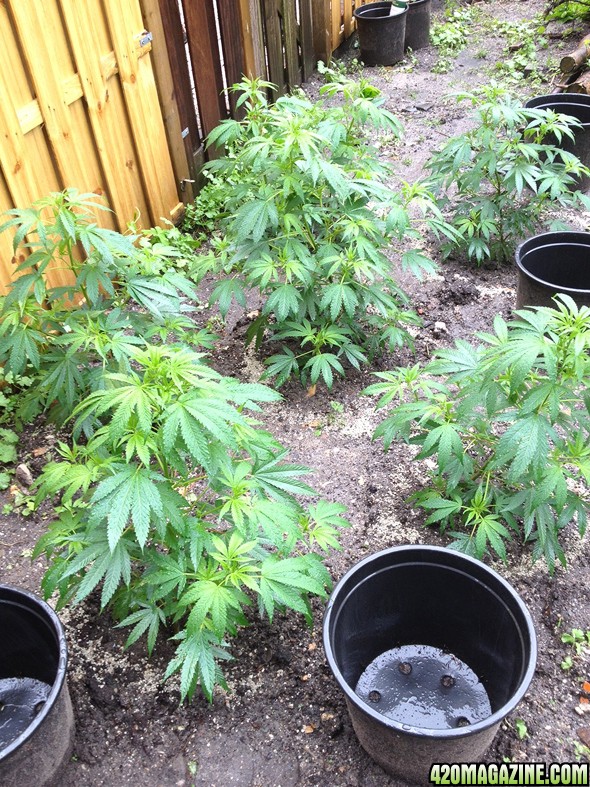 My entire outside garden 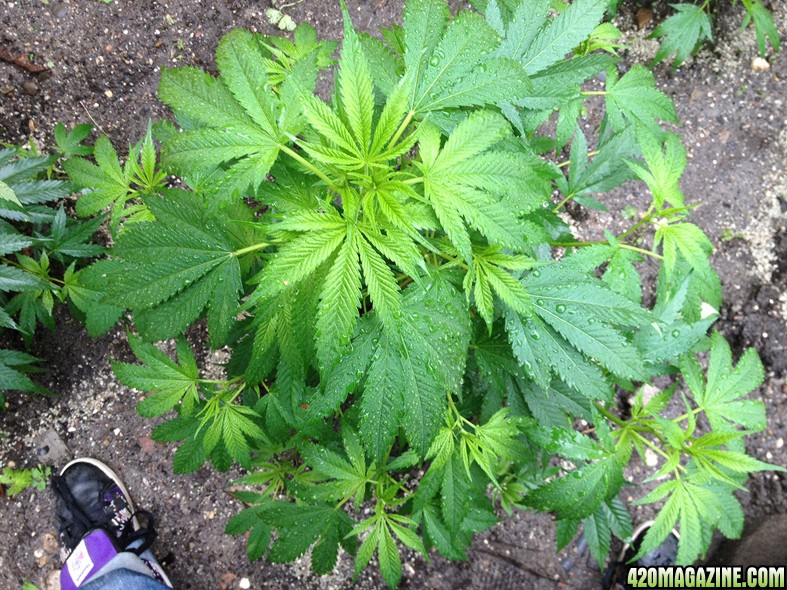 Plant directly in the middle of the crop. It seems to be the biggest and most robust so far. 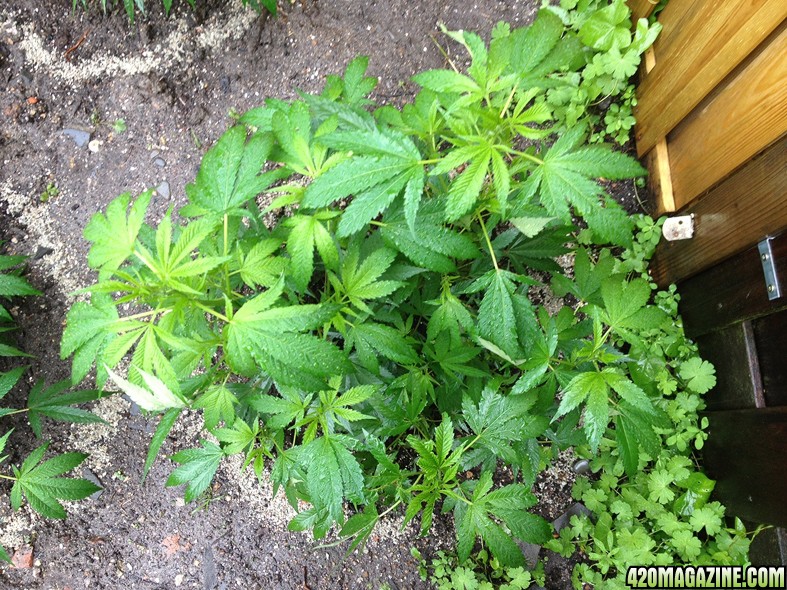 Well, that's it! This is my first grow so I'm curious as to how each of the plants will turn out. I'll try to update this journal pretty regularly so feel free to jump on in and say whatever. I'm just trying to get through this grow and learn from all of my mistakes and see what works and what doesn't. I don't to know much about growing but I'm always happy to learn from and share with others.

Cheers! Thanks for reading!

Every morning I go and check on the girls... today I spotted some brown (look like burn holes) in one of #4's bottom fan leaves, I think they may have been there before today but I missed them somehow.
I also noticed some of the top leaf tips curling under so I raised the lights a bit just incase it's heat stress. 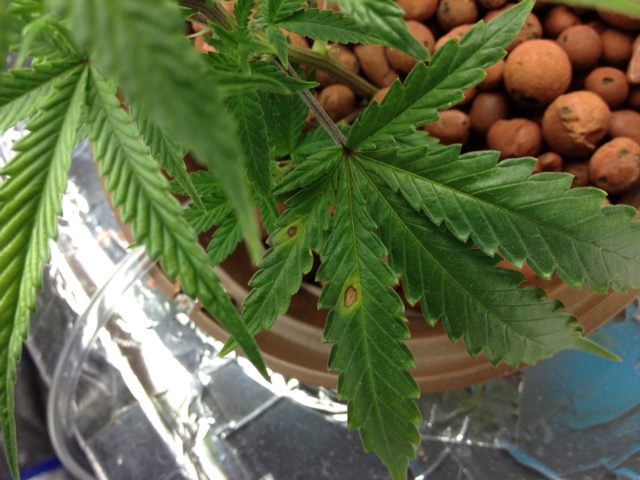 My roots are still brownish stained... not sure if it's a light leak or heat causing mold in the system or if it's just from the start booster. Any ideas? 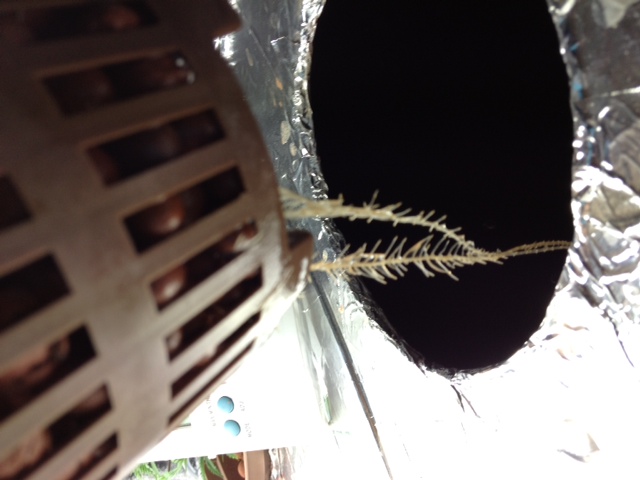 I think I might have to dump my tub soon and start my res over soon but I'm not sure when I'm supposed to do that. I'll go to the store today and find a sub pump and also grab an aquarium thermometer since I still don't have one. Thinking it might be best to go buy a lemon as well because my PH has me a bit worried.

Here's today's photo update of everyone. 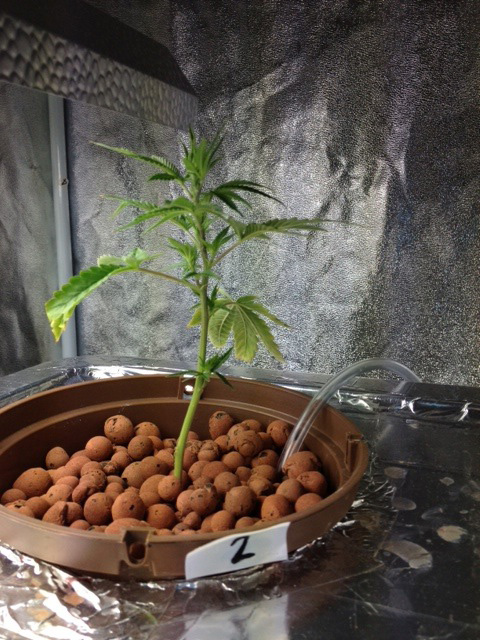 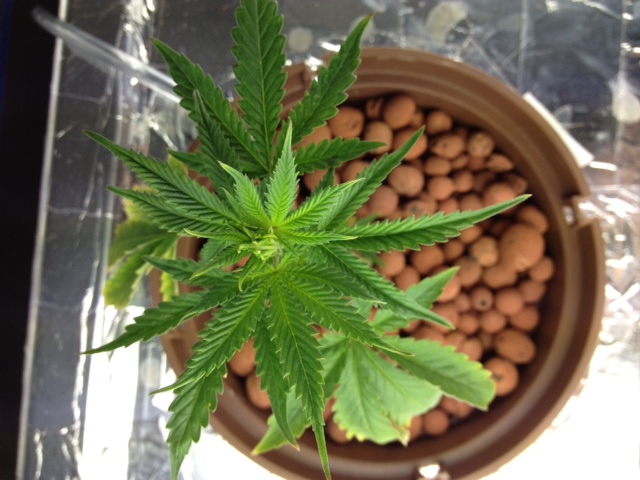 Clone #2 - she seems to be filling out downstem, it would be nice if she did. 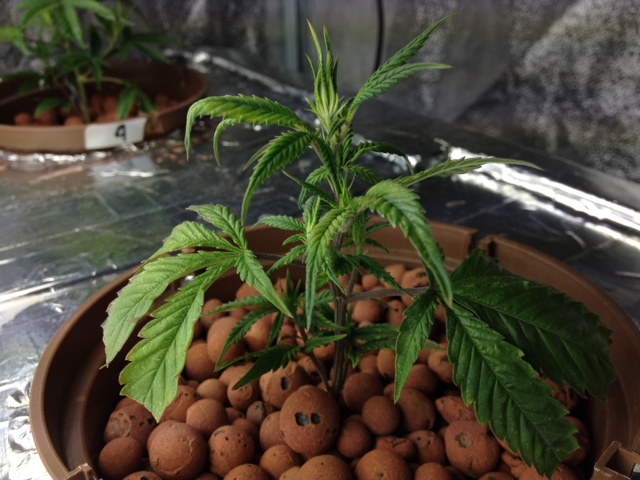 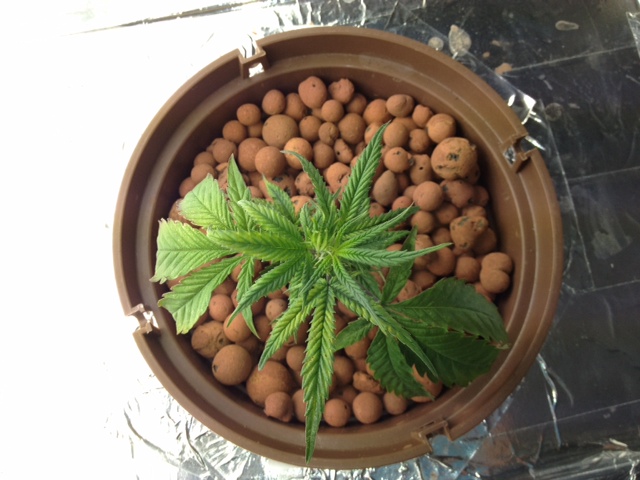 Clone #3 - Looking lovely except for her curled top leaves. The tips are a bit hard... I really think my light was too close. Hope raising it helps her out a little. 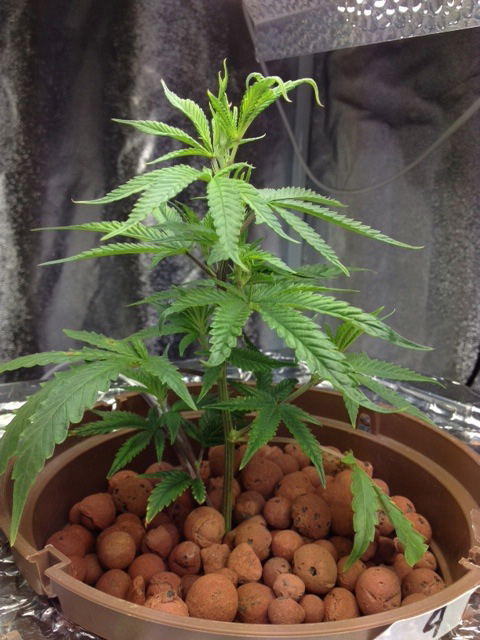 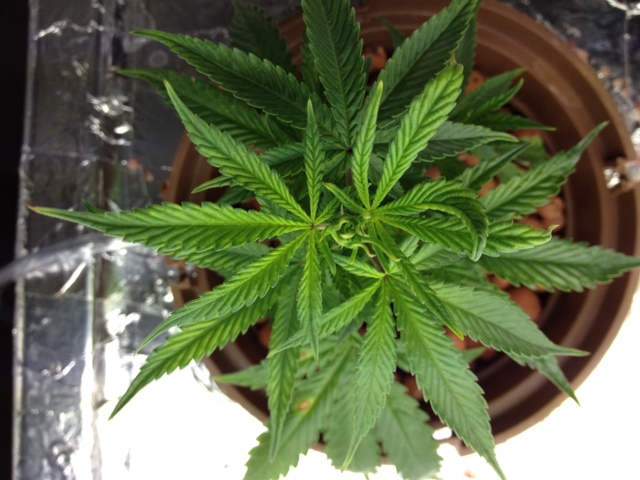 Clone #4 - She's really getting full and pretty. I'm pretty proud of her so far... She's seemed to do the best of the three but those brown spots have me really worried!

The girls outside are doing lovely. They caught a bit of sun already today and they're perking up nicely. Still battling with those slugs though... they seem to have found a way around my slug killer. Guess it's time to bring out some heavier artillery. >

So after reading around a bit on some other journals, I decided to change my res & start flowering today. I went to the store and grabbed a small sub pump and drained everything out. As you can see, there's a definite brown film in my res.. I also rinsed my netpots out with water in the sink, tried to be careful of the roots... hope I didn't fuck them up further. Quite a bit of reddish brown crap came off my hydro rocks, so perhaps some of the buildup is from that. I washed everything down with bleach solution, including the lid and the air hoses. I couldn't find any black air hoses so I decided to tape them over with aluminum tape. Perhaps some of the light leak is coming from there. I also patched a couple small holes on my res, hopefully I got all of them. To be extra safe, I lined the bottom with a towel to keep any light from leaking in on the bottom. 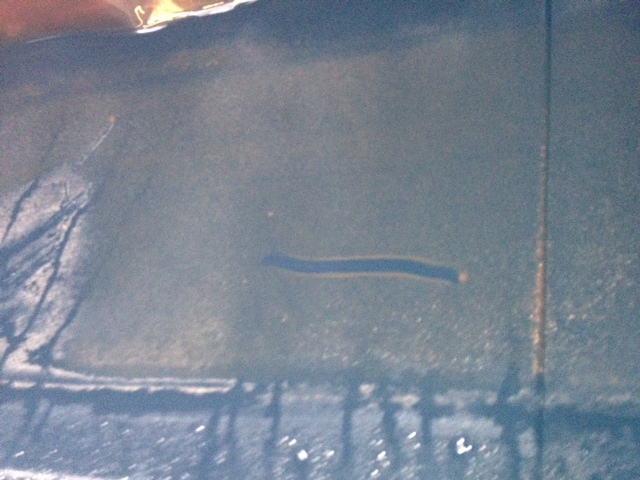 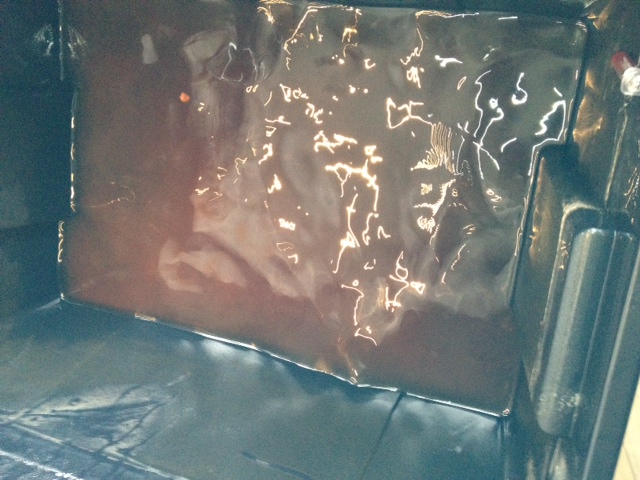 I added 280ML of A&B, along with 25ml of startbooster.
My EC is now 1.7, my ph is now 6.3 and my res temp (yay I got a thermometer!) is around 65F (19C).
I grabbed a lemon from the store and tried to lower my PH with it but it didn't really budge too much, even after about half a lemon. Maybe I needed more but that seems like too much of a hassle for me. Think I'm just going to order some ph +/- online tonight because I don't want to keep my PH high much longer.

I also decided to pull my lights back, they're now about 3+/- inches away from the top. I calculated the temp on my canopy and it was a whopping 31C!! EEK! So I think the girls were definitely burning to death. ;P Might be why they weren't looking so happy. 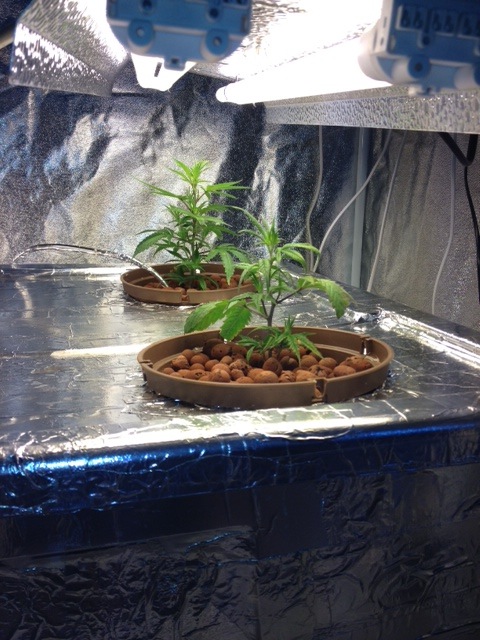 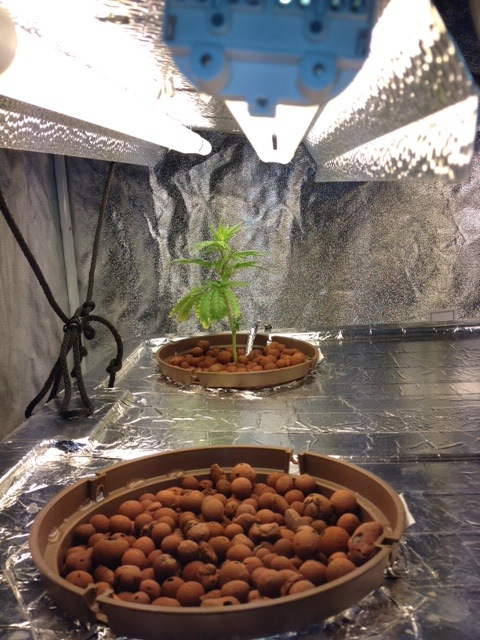 So here they are, all back safe and sound in their res, I just hope everything goes alright over the next couple weeks.
My 1st hydro NLX grow journal (DWC, Tneon T5)
J

pH in hydro is serious biz, and I'd venture that the high value, more than the heat, is stunting your girls. I have a 45l reservoir and my RODI comes in at pH 7.2 - 1.5ml of pH Down, and I'm at pH 6. So when you get that stuff, use it *sparingly*

Poor outdoor girls! They'll pull through though, no issues - our sweet lady is a tough lady too! I'll be checking on you and your babies, Nijntje!

yeahhhh I noticed! I'm learning, even if it's the hard way haha

I bought some ph- veg from canna today and lowered it to 5.8. I hope this helps overall.
When i switched to flower, i noticed all this brown slime forming all over my roots (due to my res temp I guess) so I switched back to veg after a day of that. I think that was the best thing for them. Since I moved the light up, the leaves are no longer curling down and being crispy on the tips.
My res temp has been a bitch though. It stays at a constant 26C since summer decided to show its face.

I'm trying to keep it as low as possible but I can't get it below 21C. I moved the air pump outside the tent, and I have been putting small .5 liter bottles of frozen water in it also twice a day. I think maybe I should try bigger bottles so they stay frozen longer, maybe that helps lower it an extra 2C or so.

My outside girls are looking okay... except for a few which have almost been completely eaten by the damn snails. I've tried corals and everything so I'm going to try this beer thing and pray that works. Do you know if my plants will regenerate new leaves etc after they've been eaten? Should I pull the eaten ones?

We would love to be updated with some pictures and info! :1:

Love and respect from all of us here at 420 Magazine.
420 Magazine®
Creating Cannabis Awareness Since 1993