NJ: After Not Wavering, Christie's Successor Likely To Decide Fate Of Marijuana

New Jersey lawmakers' effort to legalize marijuana has failed to convince Gov. Chris Christie to get behind the change, meaning it will be on the state's next governor to decide the issue.

Christie ridiculed a hearing last week in the Democrat-led Senate on new legislation making its way through the statehouse to legalize marijuana as a "dog-and-pony show.''

"I'm not changing my mind on that,'' said Christie, a longtime opponent of legalizing marijuana.

New Jersey voters go to the polls Nov. 7 to pick the term-limited Republican's successor and a major issue that the Democrat-led Legislature is punting to the next governor will be marijuana legalization.

Democratic nominee Phil Murphy has come out in favor of legalization, highlighting in particular the potential for up to $300 million in new revenue from taxes on marijuana sales.

Lt. Gov. Kim Guadagno, the GOP nominee, isn't as definitive in stating her position. She says she thinks that U.S. Attorney General Jeff Sessions' opposition to loosening marijuana laws is a problem for legalization.

Christie's opposition finds him at odds with lawmakers and advocates who he has turned to for support against the opioid crisis.

The New Jersey Drug Policy Alliance, for example, has praised the governor over his support for legislation expanding the use of naloxone to help reverse overdoses. But the same group is also leading the charge for pot legalization, testifying in support of the effort and calling for assurances that those with marijuana arrest and prosecution records are not barred from participating in a potential new cannabis market.

The group's state director, Roseanne Scotti, says the difference amounts to a policy disagreement, which doesn't affect collaboration on areas where they agree.

"It's not awkward,'' she said. "It's like any other relationship with elected officials. Sometimes you agree, sometimes you disagree.''

Christie has reversed himself before on drug-related legislation. In 2013, he vetoed a bill to relax possible criminal violations against those who call law enforcement to report an overdose, but then he later signed the legislation as part of a bigger bill expanding the availability of naloxone.

But such a change doesn't look likely on marijuana legalization.

A key difference between Christie and supporters of legalization is whether marijuana is a gateway to other drug use. Advocates say it isn't; Christie disagrees.

The National Institute on Drug Abuse says that findings on the question are consistent with the idea that the drug is a gateway, but it says that a majority of people who use the drug do not go on to "harder'' substances.

As far as the prospects for the legislation go, Christie's view is hard to overcome.

"The governor seems to be convinced that kids who smoke marijuana today are more likely to be on opioids tomorrow,'' said Seton Hall political science professor Matthew Hale. "That is a debated point but one he has been constant on. For the governor, marijuana is a gateway drug.''

The legislation under consideration would permit possession of up to 1 ounce (28.35 grams) of marijuana, 16 ounces (453.58 grams) of marijuana-infused products in solids, 72 ounces (2,041 grams) in liquid form and 7 grams of concentrate. It would prohibit home cultivation.

The legislation would also establish a Division of Marijuana Enforcement, charged with regulating the industry, and set up a sales tax on marijuana from 7 percent to 25 percent over five years to encourage early participation. 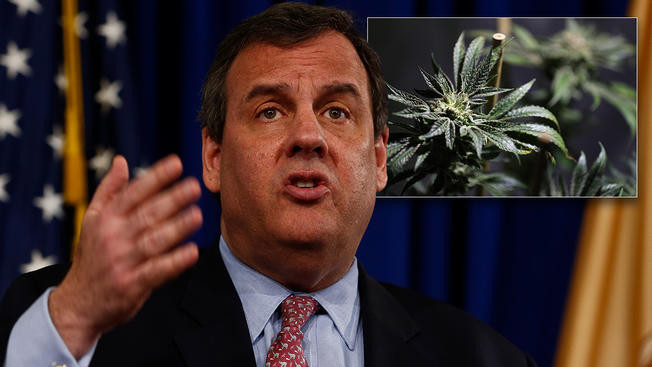