A chance viewing of Woodsman's now legendary outdoor grow made me reconsider and in turn inspired me - and with days left of a viable outdoor grow window I started my first attempt at an outdoor Northern Lights #5 grow.

Please forgive me for fast forwarding to the nitty gritty of the grow, but I really just want to document the closing stages of this as well as pass on my thanks to 420 and, in particular Woodsman, for letting me see how it's done.

I had 5 - non feminised seeds to play with and relied on the traditional technique of the camera film bag over the stem to determine who was who.
2 females came along, but one soon left the party after a run in with what I presume was local wildlife.

The remaining lady has been treated for her 4 month life to a 10 gal healthy soil mix of:

She has regularly been fed Johnny Carp and worm soup (run off from worm farm) as well as a compost top up every 4 weeks.

I snipped the top as I didn't want a full on Northern Lights christmas tree in amongst the tomatoes.

Summer here was pretty lame. Previous outdoor grows have thrived on hot, sunny days with little wind - this year was pretty wet. However there has been a nice sunny end to Autumn and now in the final stages there have been some killer days to help things along.

I saw your heater setup Woodsman and ended up doing a similar effect using the water boiler extract point for a particularly cold night.

So - the current state of play. I estimate maybe 1.5 oz off the little lady. She has 8 serious stems and a lot of inbetweeny buds. The double top looks pretty healthy, but the true gem to this plant is the number of quantity bottom branches.

Anyhoo - here is some snaps - not exactly plant of the month, but for a grow that came down to the wire, I'm pretty pleased. 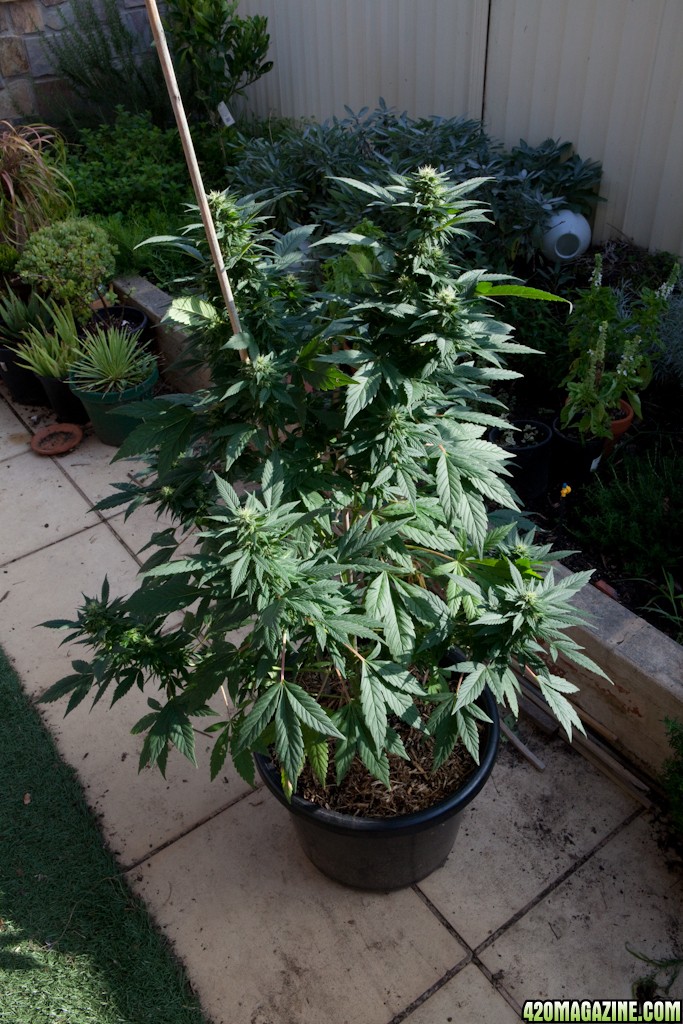 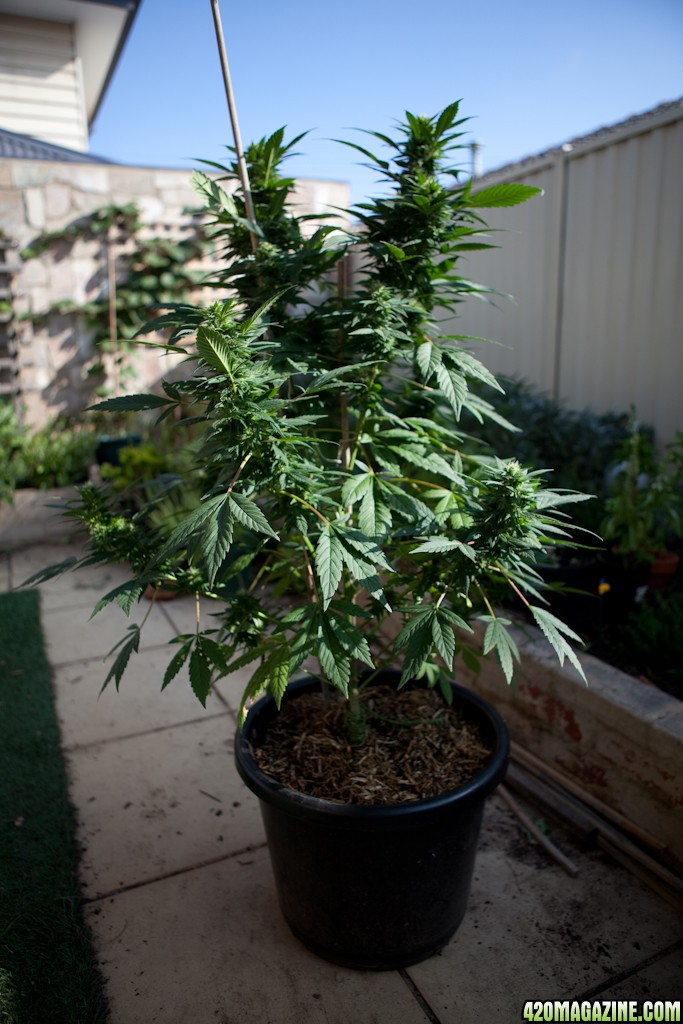 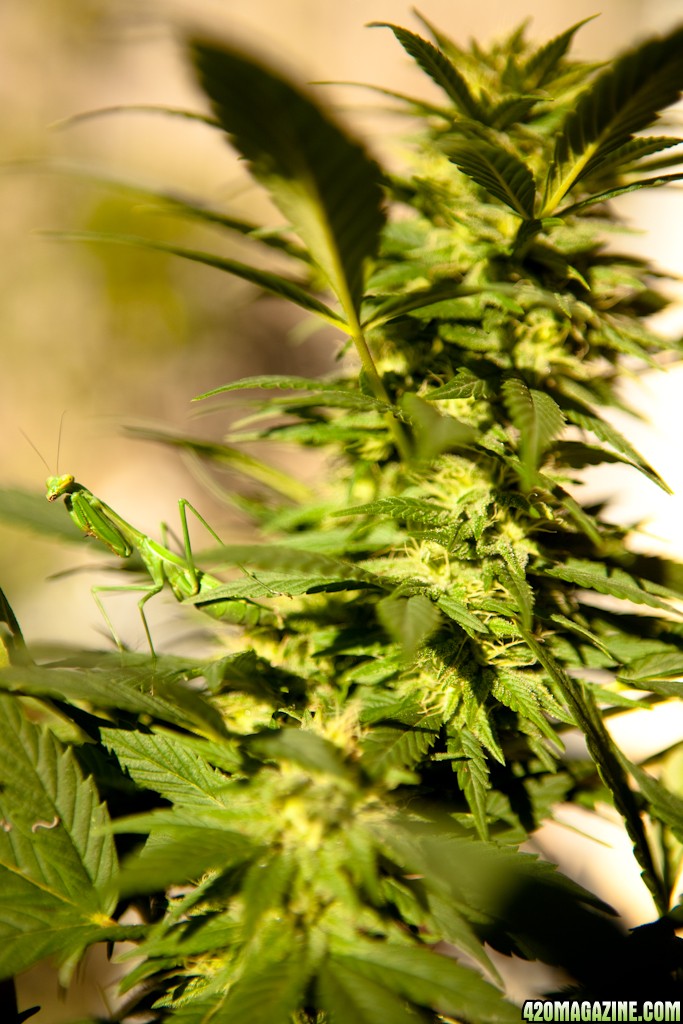 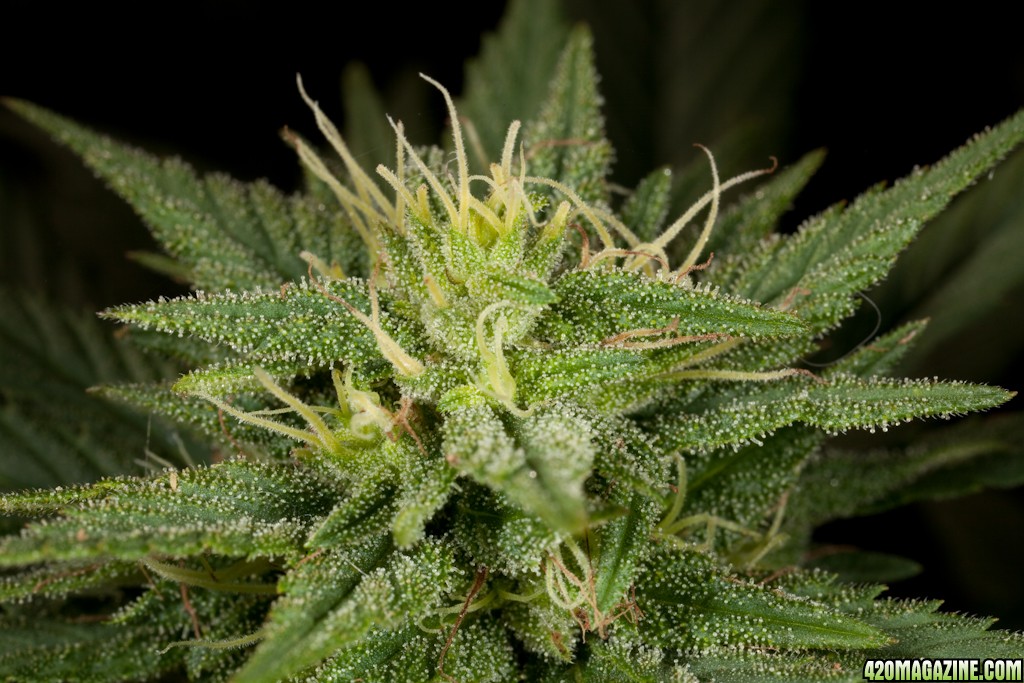 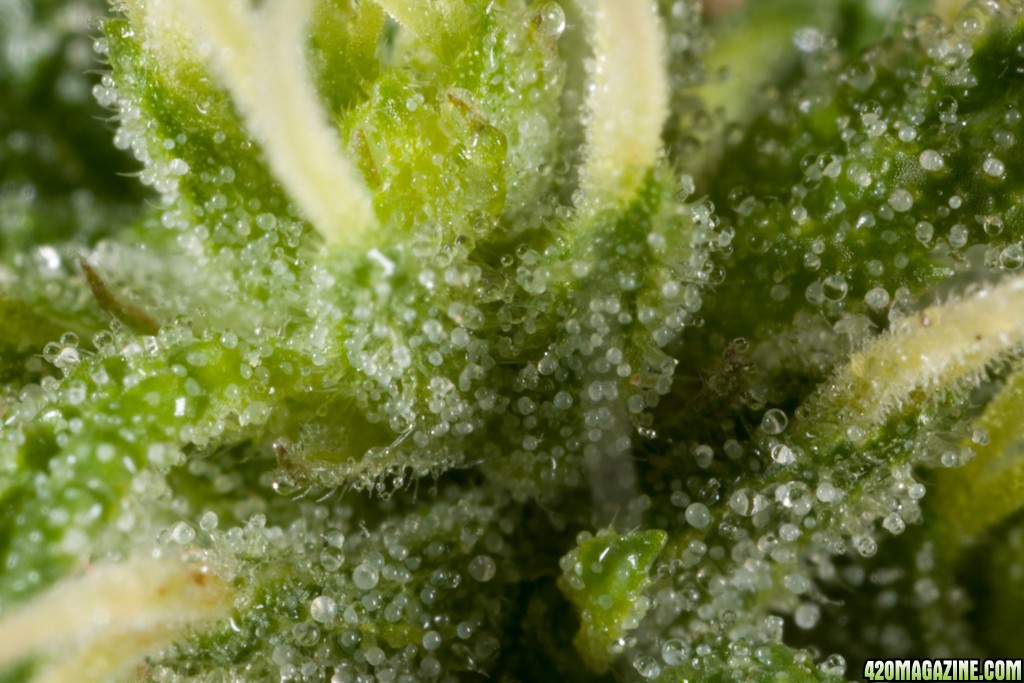 Thank you - the macro lens on loan is a great way to check the trich progress.

Sadly my initial optimism has been hit by an attack of the European Snails. Normally these suckers go for citrus fruit, but the Lady must've been too tempting. Getting rid of these suckers has been problematic as there is no chemical free way to do it and wanting to keep the grow completely organic, I've had to resort to the following methods:

So far so good, 'cept the snails are really small and there have been a couple of stowaways in some of the bigger heads. Luckily they just seem to be after the bigger leaves. 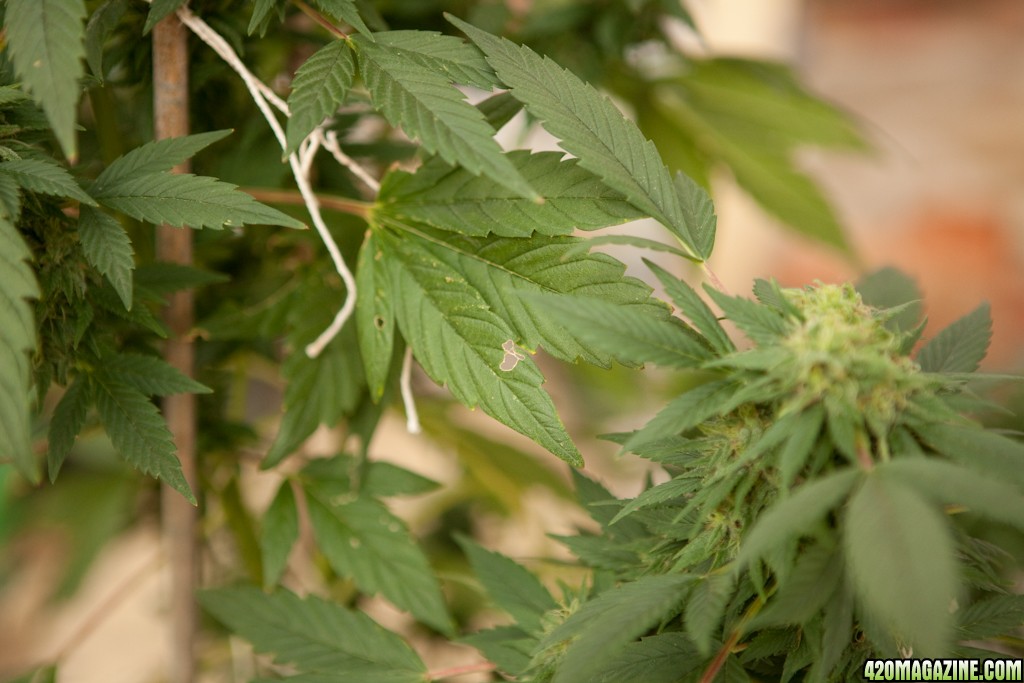 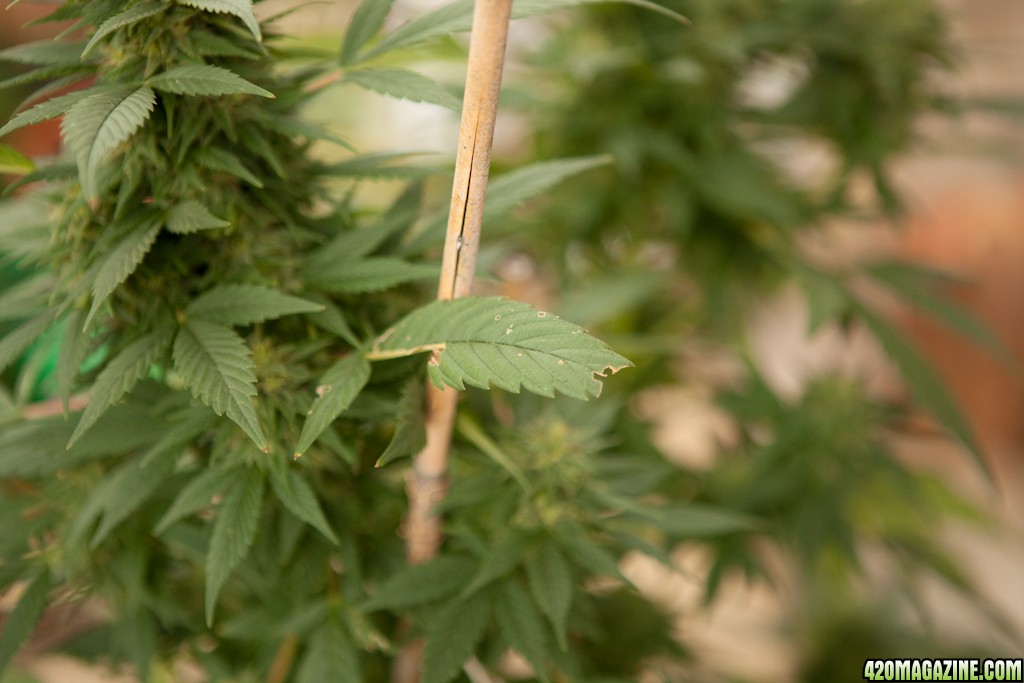 Next up was the mold. Its been very wet and a bit on the cool side so some emergency surgery was required on some lower buds. I figured now might be a good time to take some early sample buds, so I have a couple going for a very slow dry in the garden shed. Hopefully the lack of wind kept the mold infestation to a minimum. 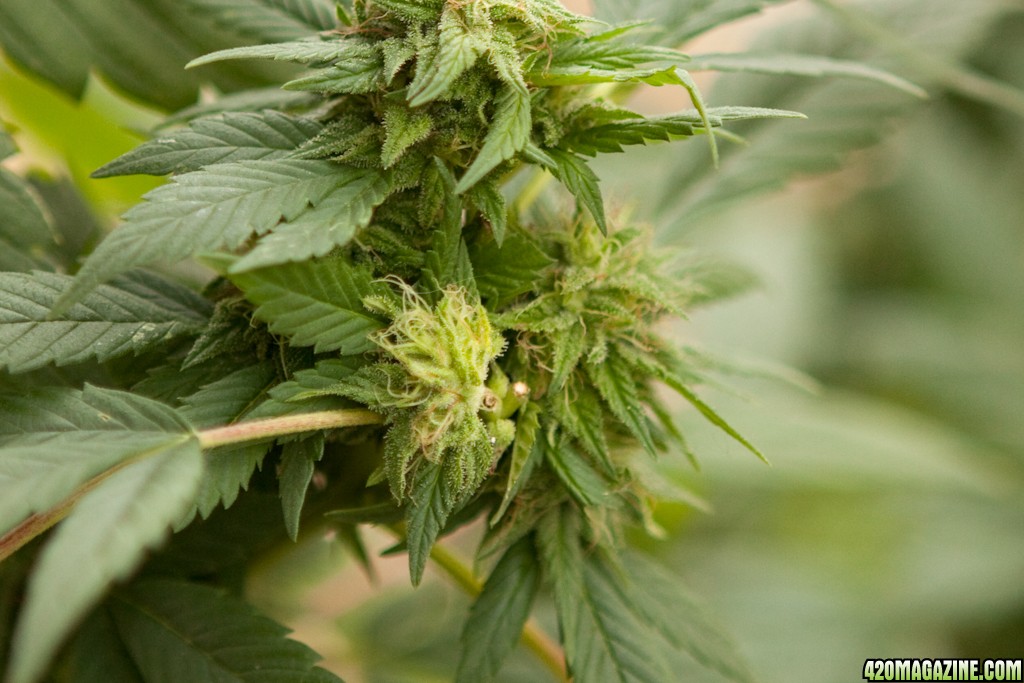 The plant now gets moved right next to the house to avoid the very cold exposed temps. at 7-9c overnight it looks like it will be a long mature period. Keeping the pot off the ground is a must for avoiding root damage and shielding it from the cold wind is a good idea. Still these temps are pretty good for the slow dry and maybe in 1-1.5 weeks the big chop can commence.

Hope those snails stay in the south.

He's not around much anymore but hopefully he'll see your thread, good luck these last few weeks.
J

Thanks man - Thanks for the Woodsman info - I think I'd be taking a hiatus from the interwebs if I had grown that much weed too.

Meantime I have added 'snails' to the list of creatures that I would consider punching in the face next time I meet one. They join the esteemed company of the Cabbage White Butterfly and Spidermites.

But pests will be a thing of the past in a wee while. Lady has pretty much 90% milky white trichs as well as the odd amber one. Temps here have been very cold, so rather than push my luck any further I will be hanging soon. 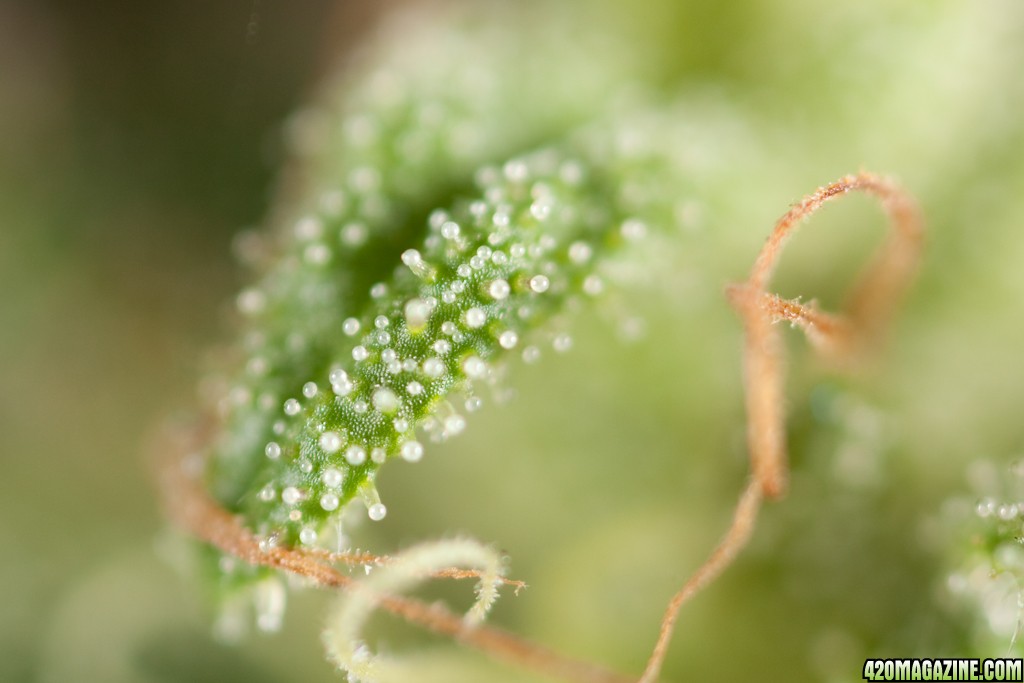 Previous indoor Northern Lights 5 grows have produced more amber pistils, so I'm not too sure whether the lack of them is due to the cold and the slowed maturation, or whether it's just an outdoor thing. Anybody know why this might be?

Anyhoo - about to get crafty with some packing boxes, string and newspaper to make a drying box. Photos this weekend!

Oh and a joke I heard this week.

A man in Scotland is getting married on the weekend. He goes to the kilt maker and says "I'd like an outfit for my wedding but I hav'nae decided on a kilt or trews"

"She'll be in a dress" comes the reply.

Well, chop chop kicked off with relative ease. Only 8 branches to lop and then trim down. The fun started when all the pests started coming out to play:

I also had 2 nuggets which ended up in the compost due to bud rot. Hopefully the leaving them to the last chop and separating them from the main crop has prevented any spores going all over the place.

Going on the weight, I might get lucky and top 2oz - going on a 60-70% weight loss - should be enough to see me through the cold nights

Got a fair bit of laced leaf too, so I may get creative in the kitchen when it drys.

The bud rot buds I salvaged a week ago are almost dry - give it a week or so and maybe I'll be able to ascertain what kind of a punch this thing packs.

Here's the morning in pics. 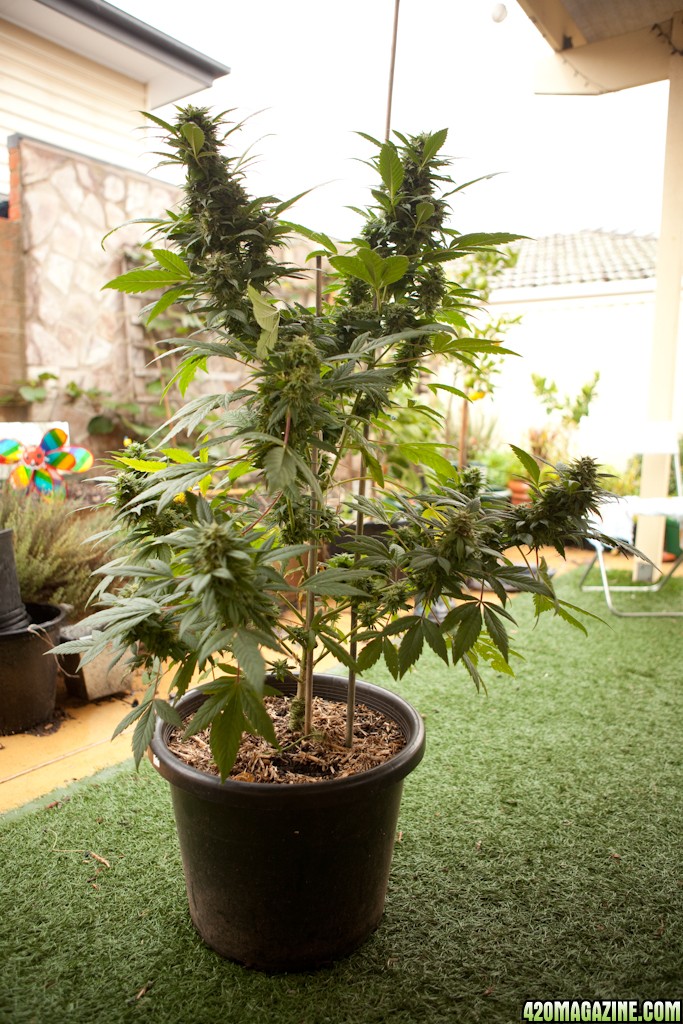 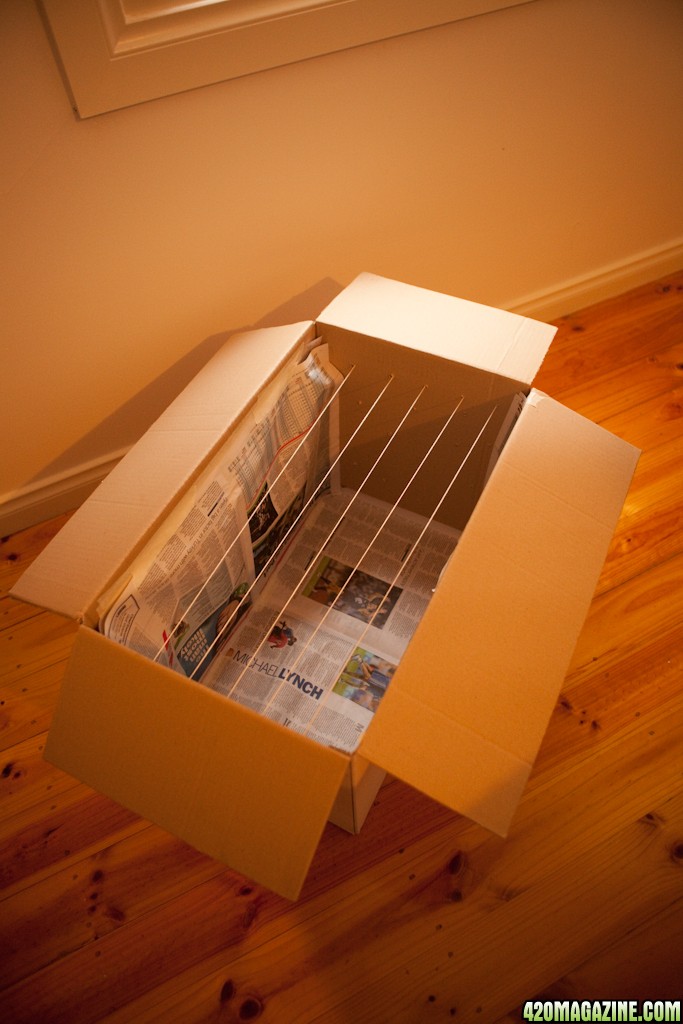 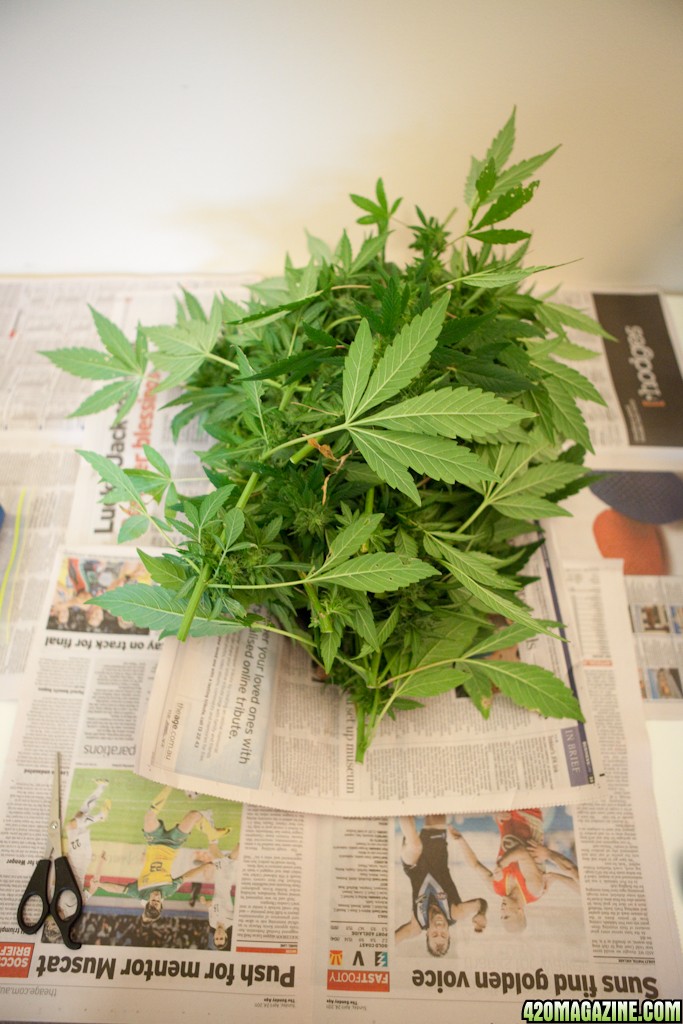 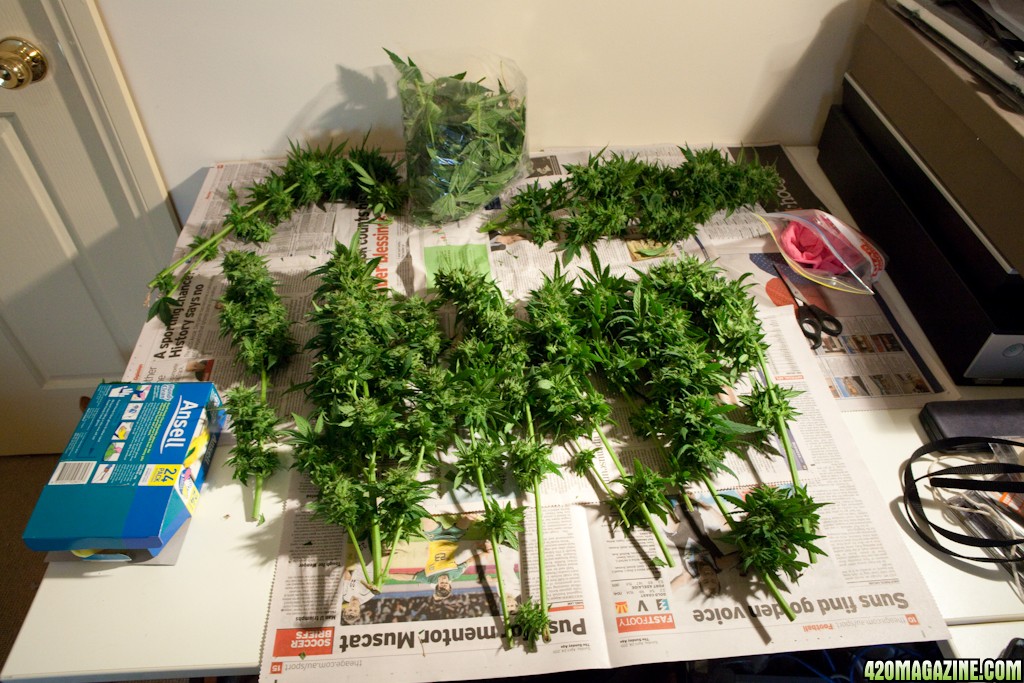 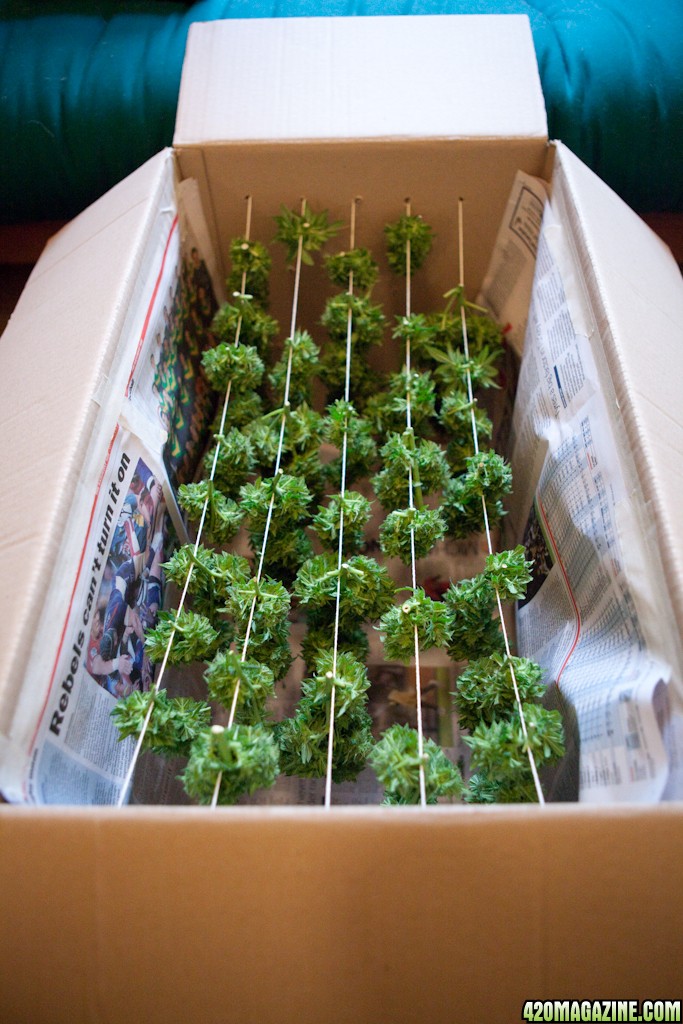 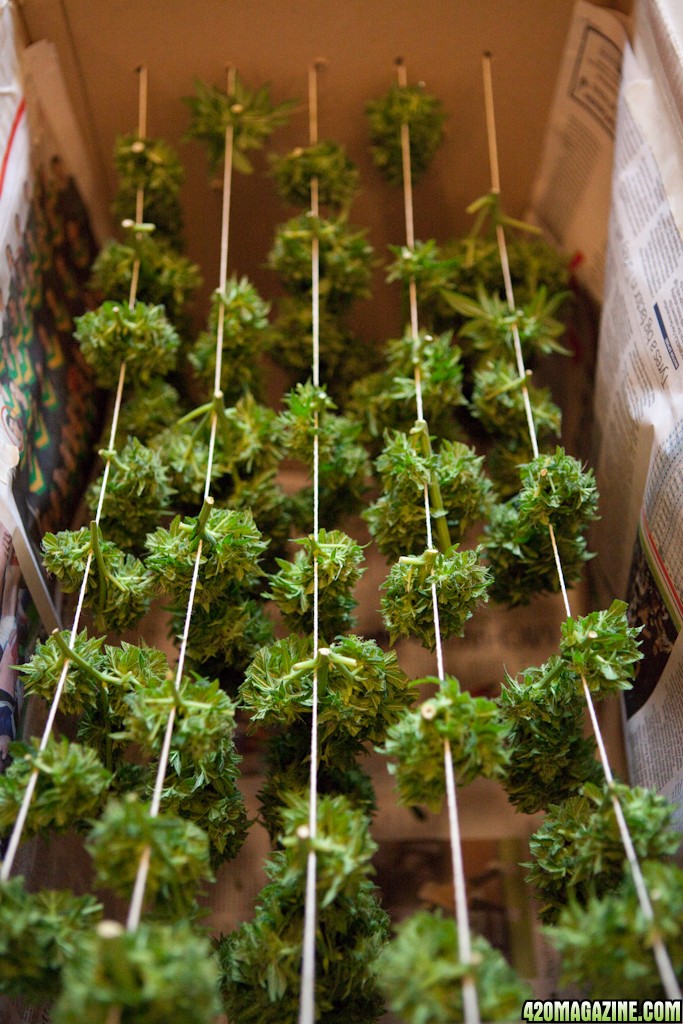 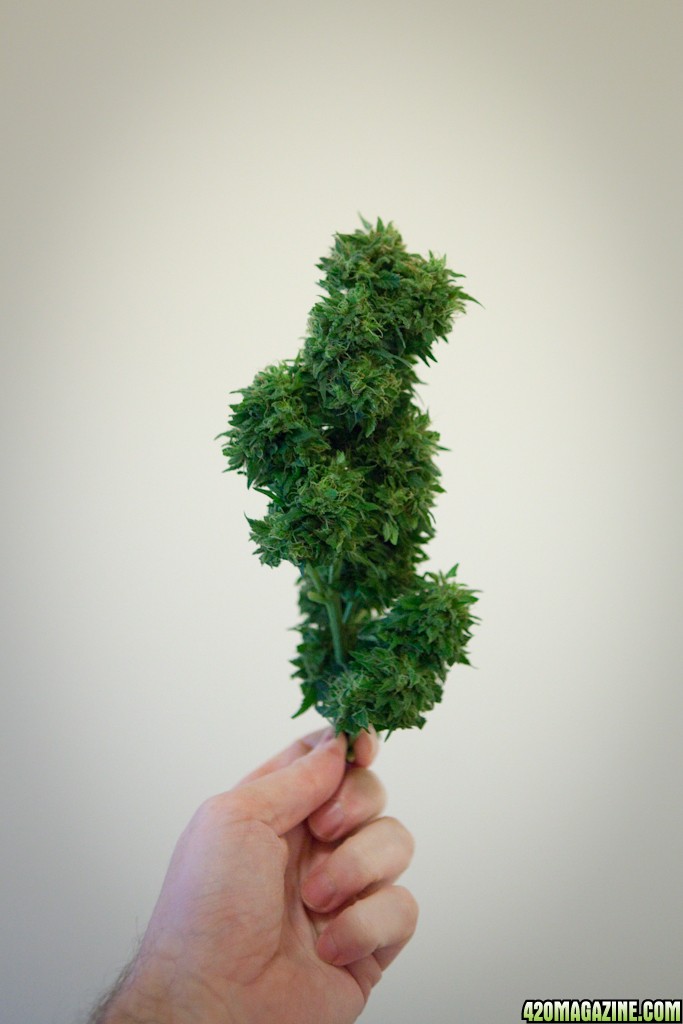 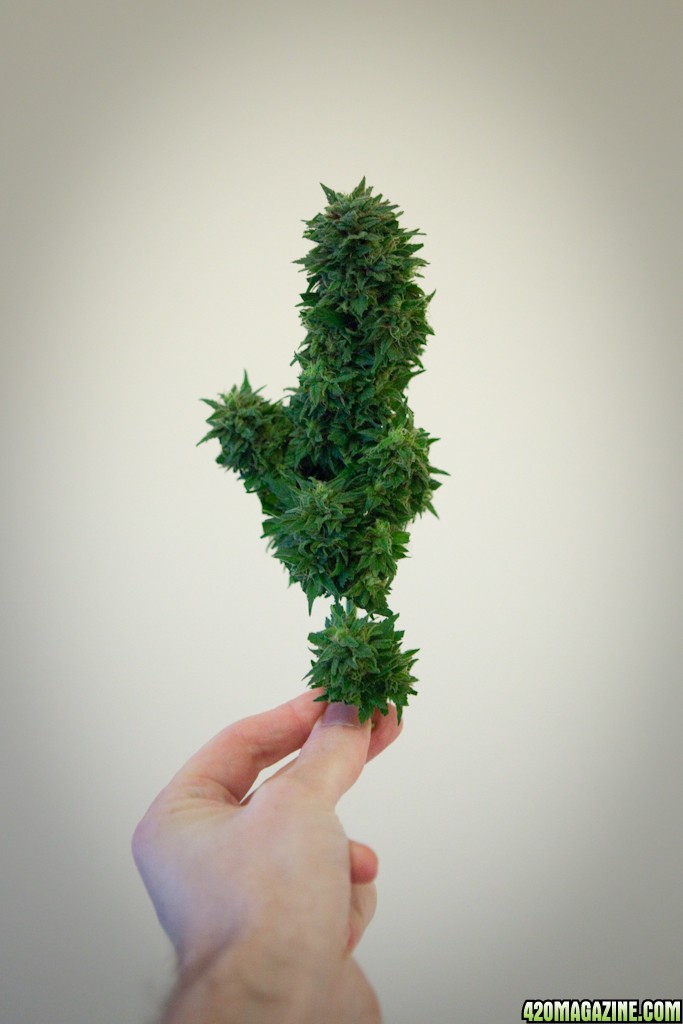 Nice harvest bro congrats! Sorry about he rot but at least you saved most of it....