As Ohio's fledgling medical marijuana program ramps up, patients, business owners and advocates still have one major concern -- who will test the marijuana?

All medical marijuana products must be tested for safety and potency before sale, per state law. But for the first year, testing lab licenses are limited to public colleges.

So far, not one university has said it will test marijuana, which is still an illegal federal substance, because of concerns about jeopardizing federal funding. That has some worried that patients won't be able to buy medical marijuana before the Sept. 8, 2018 deadline for the program to be operational.

Some state lawmakers wanted to fix the law in the two-year budget bill that cleared the General Assembly two weeks ago. But an amendment that would have scrapped the university requirement didn't make it into the bill.

Sen. Bill Coley, a Liberty Township Republican who drafted the amendment, said legislators are aware of the problem.

"None of the state universities has stepped up and said they want to do that yet," Coley said.

Coley said he plans to bring up the issue after lawmakers return from summer recess.

"If in fact, over the summer, one steps up that will be OK," Coley said. "But if not we'll probably address it in the fall."

The department reads that part of the law to mean one year from when any marijuana business license application is accepted, not just testing labs, spokeswoman Kerry Francis said.

So the earliest the licenses could be awarded to non-university labs would be June 5, 2018 -- one year from the first date cultivator applications were accepted. Francis said that would be early enough to meet the September 2018 deadline for the program to be up and running.

Why did the law limit testing labs?

No other state limits marijuana testing to colleges. The testing lab restriction was added to the bill at the request of Sen. Frank LaRose, a Hudson Republican, late in the process.

LaRose said in a recent interview that he did not intend to hold up the program's implementation with the amendment. LaRose said it made sense to him that Ohio State University's Ohio Agricultural Research and Development Center in Wooster, in his district, would have the expertise to test and possibly research marijuana.

"I'm sure there's great third-party, for-profit entities out there that could do this work, but is this something we could do right there with capability," LaRose said.

LaRose said he worked with OSU to craft language that would give OSU and other schools the first bite of the apple. LaRose said OSU officials were "gung-ho" about hosting the "state lab" and "in with both feet" on it.

Ohio State declined to comment directly on LaRose's retelling of events. But a spokesman said OSU is not "pursuing any avenues to engage in testing" because of federal law and regulations.

"As the state of Ohio implements the program to allow for the cultivation, processing and dispensing of medical marijuana, Ohio State looks to engage as an appropriate partner while at the same time complying with federal, state and local laws," OSU spokesman Ben Johnson said in a statement.

Why won't colleges get involved?

Ohio and 28 other states have legalized marijuana for medicinal use. But federally, the plant is considered among the most dangerous, with no medical benefit, alongside heroin and LSD on the Controlled Substances Act's Schedule I.

When Ohio lawmakers last year legalized marijuana use with a doctor's recommendation, they also reclassified medical marijuana as a Schedule II substance in state law, grouped with morphine and other prescription painkillers.

"Possessing marijuana, even for testing, is unlawful without specific authorization from the Drug Enforcement Administration," Chris Lindsey, senior legislative counsel for pro-marijuana group Marijuana Policy Project, said in comments submitted about the proposed testing lab regulations. "It is unclear whether and to what extent an institution would be able to obtain such authorization, even when the institution is furthering the purposes of the state."

The election of Donald Trump has brought more uncertainty to the federal-state conflict. Although Trump said he supported medical marijuana during the campaign, his Attorney General Jeff Sessions has taken a hard line against marijuana use for all purposes.

What's happened in other states?

Ohio isn't the first state to delegate part of its medical marijuana program to colleges only to see it fail.

Maryland initially wanted its state university medical schools to dispense marijuana, but none wanted to do so. Four years later, the state awarded its first licenses but the process is on hold amid lawsuits.

In Illinois, the University of Illinois at Chicago at one point planned to test medical marijuana but later backed out.

Louisiana legislators gave agriculture centers at Louisiana State University and Southern University first crack at growing and extracting medical marijuana for its limited program in a bill passed last year. But instead of declining the offer, the schools plan to partner with private companies that will grow marijuana on school land and pay all associated costs.

Ohio is already home to one private company interested in testing -- Battelle Memorial Institute. A Battelle attorney lobbied state regulators earlier this year to axe the university restriction and make a few other changes to the testing lab regulations.

The nonprofit plans to research marijuana at its Maryland facility but won't be able to do the same for a while at its Columbus headquarters, which happens to butt against OSU's medical campus. 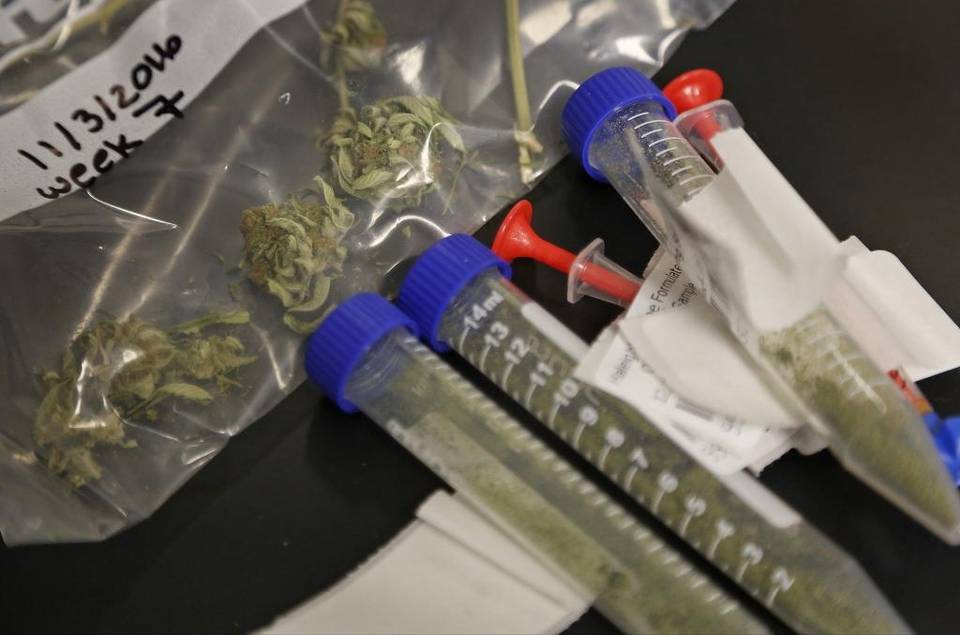