No one talks about true full spectrum LED's

And there's only one company (that I've found) that makes them.
Until recently I only knew LED's as being those panels filled with reds and blues and what not and was never impressed by this new technology. It just seemed too unnatural. Then I discovered a "true" full spectrum LED grow light. Im not claiming these lights are better than traditional LED's. I just know they present a PAR spectrum that is much more like the sun than those other models. And you dont need a PAR chart to see it. I don't own one or know anyone who does. I'm simply addressing the issue that these things exist and nobody seems to know.
I plan to own one of these lights in the near future and will post an extensive thread about it. If you know of company's who make them or if you've actually used one I would love to hear all about it.

The company I'm aware of claim they are the only makers of "true" full spectrum LED grow lights, and they seem pretty excited about it. American made and 5 year warranty seemed almost too good....so I called there tech support. They were happy to talk with me in length about there products and assured me that if I didn't like there product I could send it back for a full refund. He then went on to say that they've sold over 2,400 and have never had one returned. Check them out, I was enlightened.

people! Ill leave you all with this token of my appreciation. 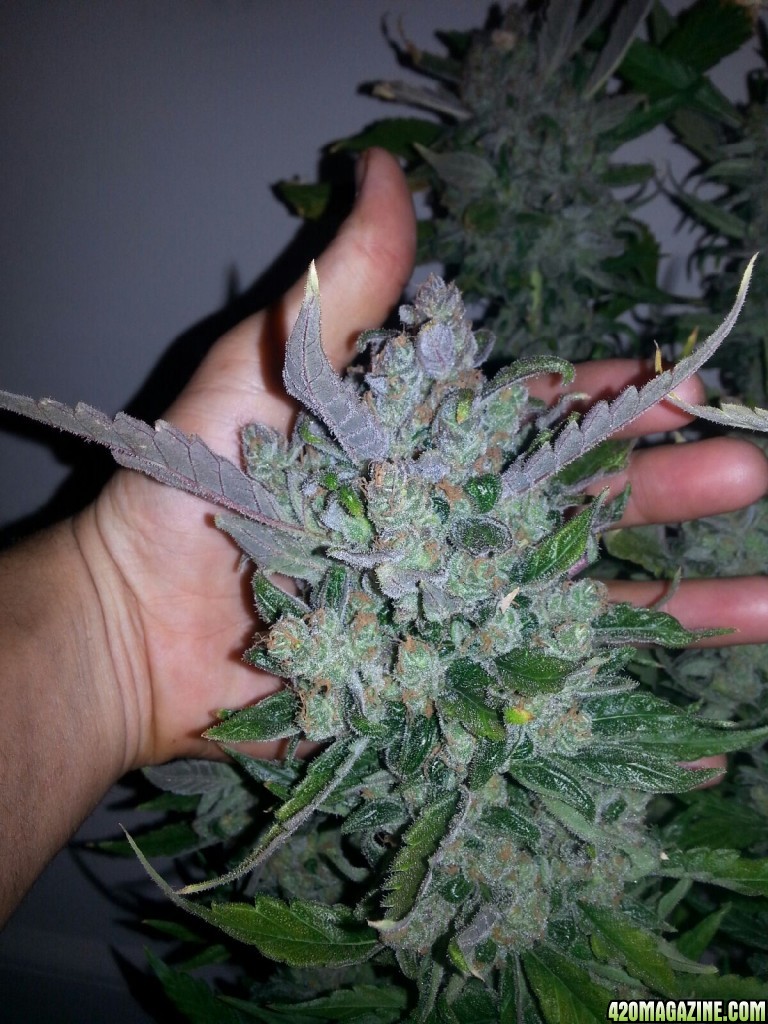 American made? That means the price is going to be outrageous. I'll wait until someone else does a test grow on this site with it before I'd believe any of that. And why do you keep putting true in quotes?
P

And if they've sold 2400 of them, why is there not a single grow journal? Google only gives a YouTube video by them and twitter/Facebook. Sounds like you're a salesman to me...

Edit: ha hahahaha, 1000 dollars for a 250 actual draw watt light? That's a joke dude. Spend your money on something worthwhile
B

If u support these so much y is ur gallery only using CFls, u documented the crap out of that but not ur 1000 led, smells fishy I'm with Peyton on this one. Keep it "true" drewdrips
13 strain journal and always looking for more

Not really constructive criticism... But it does sound like an ad now that I read it over, I get a little over zealous sometimes. Blueballs, I only own cfl's, im a newbie. And Peyton i agree its expensive and there's not a lot of info online about it. Thats why I asked if anyone knew of different company's or had experience with them. "True" is just how it was on the website. Im not promoting anyone, there just the only company I know with LE D's that dont look like they came out of a bright light and wanted to hear from anyone with experience.
I guess I got what I wanted.

If you're not a salesman then my bad. We have led sponsors here, and most growers are only gonna use what's proven to work. Nothing against you personally, but it did sound like a pitch. If you have any interest in real led grow lights, take a look at some journals here and see what people are using. That way you get to see real results, not what they claim it can do to basil. But take a look, have fun and get some more grows going!

No harm done. I also get frustrated with all the sneaky salesman in forums. Ive been on the LED kick for months now. Ive looked in to every model ive heard of and I enjoy looking through jornals and have seen plenty of good results with a few different brands. I only mentioned this one because its not well known and seemes different from all the rest. Just for science ill probably still order the $200, 25 w model. (Money back gauranteed). Then ill know for sure. Ill be sure and post a journal for all my 420 friends.
Happy Growing

what perceptible advantage so you think these offer over existing units?
P

Even as testing only purposes, I wouldn't spend that much money on a light that has that little watts.
K

Thats like the buildmyled.com they claim to have the best light but I can't afford to spend the 1000 price tag on there 600 watt spider light and I looked for some one who might have done a grow but couldn't find one. Why because they can't compete with mars prices. I do like the way there light looks like more coverage than the mars. Actually looks like a spider and you can order any color you desire but way too high for not seeing a grow i was gonna ask them to sponsor me since we built the reps hydro tanks.
https://www.420magazine.com/forums/...etual-playground-post2185978.html#post2185978

Im just a personal grower who doesnt need a lot so the small wattage is fine. And if I can get a full refund then I wouldn't be out anything if it doesnt perform as advertised. I think these lights may be better simply because the light they emit actually looks like sunlight, or more like it than the other LED's. Im a man of science but I believe mother nature does it best. Plants have developed over billions of years to grow in sunlight so the closer I can get to that the better. In theory, ofcourse.
ALASKAN THUNDERFUCK DWC CFL
https://www.420magazine.com/forums/...731-alaskan-thunderfuck-dwc-cfl-2nd-grow.html

The color of light has nothing to do with growing. It's all about the wavelength of light that is used. And even in a small grow, you'll find out fast that the wattage of light and penetration means a lot. You'd be better off with a bunch of CFL bulbs probably. I know they'll refund the light, but they can't refund your grow that's wasted. I would just stick with what's proven. If it was as great as they say, you'd see at least one journal with it. All they show is basil growing. Not the same as growing cannabis
B

As a wiseman that once put me in my places said, u actually don't need all that light. Only certain spectrums specifically in nm aproximitely 430nm (blue spectrum that triggers chlorophyll A), aproximitely 475 (blue spectrum triggers chlorophyll B) then in the red spectrum 640-680 nm triggers a and b. These spectrums maximize chlorophyll production making faster growing and producing plants. Actually the extra spectrums can actually harm them if u got too far off the scale , like a sunburn basically. After researching what he told I found he was correct and looked up a company that makes mh bulbs in specific nm wave length. I found 3 2 were over 3000 and the last needed 118 day heads up for production lol. Then I found lights for lizards do this for specific species like those found in the kush mountains duplicate those spectrums and also some of the most potent we weed in nature grows there. It's also near the equator and at higher altitudes resulting in more blue spectrums because there is less distance for light to travel. If u want to replicate nature start where the greatest weed grows by geographic location and replicate that light.

With all that said u will probably do what I did and have ur mind blown for a few days then go with what u know works as I did. For me that was mh veg hps flower. Or led that emits blue spectrums veg red durring flower to maximize thc production In the end
Hope this was worth the read for ya. Curtesy of brick top, wherever he went
13 strain journal and always looking for more

Peyton, the wavelengths you mentioned is color. The wavelengths make up the visible light spectrum and are measured in nanometers. (Different wave lengths different color). Blueballavngr, I didnt know you could custom order HID bulbs like that but unfortunately Its crucial for me to keep the energy Cost as low as possible so those arn't an option for me. I know of things that work, ive had pretty good results with just CFL's and dirt. I love a good journal as much as the next guy but I believe this site should be just as much about presenting new ideas and chellenging old ones. I wouldn't have had the success that ive had if it wernt for the knowledge of proven methods shared with me by more experienced growers like yourselves but if everyone stuck with what they knew, we would never discover anything new. Im the type of guy who likes to see things to believe them so ill order one, put it to the test, then I wont have anything to wonder about. Keep any eye out for the journal if your curious as to how it will go.
Thanks for the feedback 420 friends. Happy growing

Wavelengths are wavelengths. Yes they're measured in nanometers, but you weren't basing your opinion on that, you said it's color looked more like natural sunlight. You don't see light the same way a plant does. You seem pretty stubborn, so I'll let you learn from your own mistakes.
M

When you are talking about 'white light' then that is a broad spectrum containing most wavelengths/frequencies of light.

You can simply engineer an array of 'warm white' LED light bulbs if you're looking to make a cheap broad spectrum light.

They even manufacture small 15w COB bulbs, so 9 of those together would produce as much usable light as a 100w UFO.

9 x 15w = 136w. One third of that would be wasted light in the green/yellow wavelengths, so about the same. 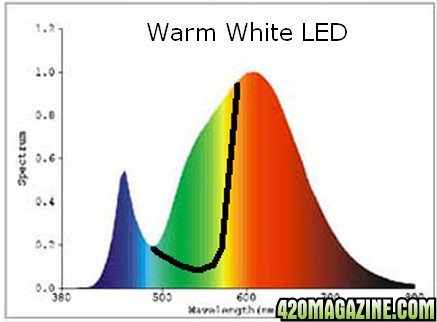