North Carolina is on the verge of joining the wave of states to approve a form of medical marijuana as lawmakers voted to allow its limited use for treating seizures. The Hope 4 Haley and Friends bill is named for 6-year-old Haley Ward of Newport, who suffers from multiple daily seizures. The measure passed unanimously in the state Senate on Thursday, having cleared the house last week, and now awaits the signature of Governor Pat McCrory, who has not taken sides on the issue. In passing the law, North Carolina would join a handful of other states nationwide, including conservative southern states such as Alabama, Mississippi and Florida, to allow the use of a cannabis extract, cannabidiol (CBD), in certain circumstances.

A chemical found in marijuana plants, CBD has been shown in early studies to reduce seizures, particularly in children who suffer from epilepsy. The medicine is gathered from cannabis plants genetically engineered to contain only tiny amounts of the compound THC, the component that causes marijuana to produce a high. The narrowly tailored measure that passed on Thursday overcame early concerns it would open the door to legalizing other forms of the drug.

The bill authorizes the sale of CBD only to patients who suffer persistent seizures and must register with the state. It also calls for research into the drug's effectiveness. Selected universities in the state would be allowed to grow cannabis for study. "This is going to give hope to a lot of precious children who have been waiting a long time," said bill sponsor state Representative Pat McElraft, a Republican. "This is not the camel's nose under the tent." Parents offered emotional testimony as the bill went through legislative committees, citing CBD as a last hope for children who suffer sometimes dozens of seizures in a single day. Other medications, they said, have been ineffective with debilitating side effects. "The medicines we're giving her today are ripping her apart," said Steve Carlin, whose daughter Zora, 5, has a rare form of epilepsy. 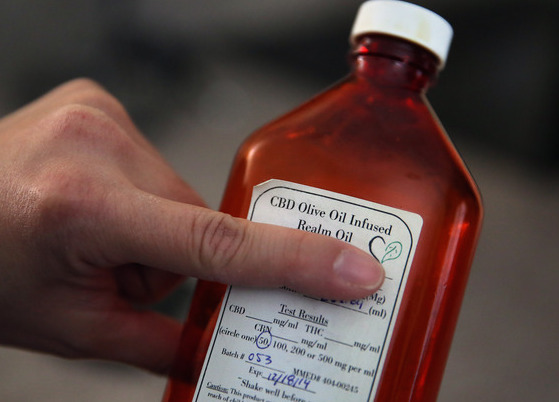 RALEIGH, N.C.-- Gov. Pat McCrory says a new law he signed allowing some physicians to treat epilepsy in North Carolina using an extract from a marijuana plant could also lead to the discovery of other therapies. McCrory signed the hemp oil bill Thursday during an Executive Mansion ceremony.

The legislature sent him the bill supported by family members whose children aren't responding to conventional drug treatments. The law allows neurologists to participate in clinical trials with the oil, which is taken orally.

Lawmakers say the oil doesn't produce a high. Patients and physicians would register in a state database. Possession of the oil wouldn't be illegal in these cases.

Universities would be encouraged to conduct hemp extract research. The law was named for 5-year-old Haley Ward, who attended the ceremony.

Given N.C. has a number of military bases and a large population of both current and former members of the military, many who have seen a good deal of combat, you would think much of the future research would go into finding ways to help those suffering from PTSD.

In light of all evidence currently available, it is striking that the FDA refuses to investigate cannabinoids for the treatment of anxiety disorders like PTSD yet they have approved studies of MDMA, the club drug Ecstasy, for the treatment of PTSD (Doblin, 2002). I hope the State of N.C. is both more intelligent and more compassionate than the FDA and also than the U.S. government given how it was the U.S. government that ordered the members of the military into combat causing the PTSD problems many now suffer from.
"I like pigs. Dogs look up to us. Cats look down on us. Pigs treat us as equals." - Sir Winston Churchill