In the shadowy marketplace of quasi-legal cannabis, cash rules. North Bay cultivators, processors, distributors and dispensaries move product and transact millions of dollars' worth of business, but few people accept digital payments. Payments happen with stacks of cash - one form of green for another.

Most banks shun cannabis businesses because pot remains illegal on the federal level, reaffirmed in August as a Schedule I drug under the Controlled Substances Act of 1970. Banks are regulated and insured by federal agencies. Banks balk at public association with the cannabis industry; their brands could suffer and they don't welcome the inevitable federal scrutiny.

If California voters approve adult recreational use of cannabis on Nov. 8, the cash crunch will worsen as payments soar in an industry that could hit $22 billion by 2020. As more retail businesses accept chip-enabled credit cards and smartphone payments such as Apple Pay, the cannabis cash dilemma appears bizarrely antiquated.

It's as if banking technology regressed in the cannabis industry to the years from 1875 to 1900 when cash-crammed stagecoaches and trains were commonly robbed in the Wild West. TreasureNet, an online site for treasure hunters, described an auction item reportedly sold in 2008: a Wells Fargo train-robbery ledger with dozens of listings.

To control risk and participate in the digital age, cannabis merchants might record video of cash transactions then store gigabytes of video data in the cloud.

The pot market is huge and growing fast. Nearly half of states allow medical cannabis. Four states with total population near 18 million already allow adult recreational pot, including Oregon, reckoning with cash issues on tax payments this year, described below. Another five states including California, with total population near 60 million, vote on Nov. 8 whether to make adult cannabis use legal. But the federal government, which regulates federally chartered banks and insures state-chartered banks, still sees cannabis as illicit.

It's hard to run a substantial business all with cash, but that's what pot proprietors do.

Banks regulated by the Office of the Comptroller of the Currency must file suspicious-activity reports on currency transactions exceeding $10,000 to the Financial Crimes Enforcement Network part of the U.S. Dept. of the Treasury under anti-money-laundering laws. Cannabis operators who make multiple cash deposits or transactions under $10,000 to avoid suspicion must also be reported, in schemes that regulators call "structuring" or "smurfing," in banking jargon.

Government entities also reckon with risks and impracticalities of bundles of cash, such as for tax payments. Each bill of cash in whatever denomination weighs about a gram. A payment of $45,000 requires 454 bills or nearly a pound of $100 bills. The same payment requires 2,270 bills or nearly five pounds of $20 bills. A $1 million collection of sales taxes in $20 bills entails 50,000 bills and exceeds 100 pounds.

Santa Rosa attorney Dan Beck has represented cannabis-industry clients, particularly in criminal law and including retail dispensaries, for 20 years since California legalized medical cannabis in 1996. "You cannot bank or put money in a bank as a cannabis cultivator or manufacturer," Beck said. Medical-marijuana dispensaries operate under collective or cooperative structures as nonprofits - in cash.

Julie Mercer-Ingram, an attorney in the Beck firm, practices cannabis-compliance law under the business name CannaLegal - "anything cannabis-business-related," Mercer said, including setting up LLCs or drafting cannabis-related contracts.

Cash management is "a very sensitive topic," Mercer said, under California's existing nonprofit collective or cooperative model (authorized by SB420, 2003) for medical cannabis sales. "We work with a CPA and bookkeeper to capture whatever is coming in. It's all cash," she said. "No one wants to operate like this."

"Can you imagine paying your staff salary in cash, counting out?" said paralegal Jolene Strange, who works with CannaLegal. "It is so ridiculous that businesses are forced to operate like this, completely inefficient."

Dealing with piles of cash raises business risks. "These businesses have to use full security systems," Mercer said. "They have vaults, cameras, panic systems." When cannabis businesses apply for permits in the City of Santa Rosa, security details are held in confidence.

Even cash-based illegal businesses are expected to pay income taxes. IRS code Section 280e pertains particularly to cannabis enterprises, Mercer said, because it prohibits businesses from deducting what would in another business be legitimate deductions or credits, except for cost of goods sold. Pot sold in a dispensary off the books for cash becomes a problem because there's no documentation. Wages paid to dispensary employees may not be deducted under 280e.

Section "280e carves out an exception to business deductions," Mercer said. A business selling a controlled substance under the Controlled Substances Act (cannabis is a Schedule I substance) cannot deduct normal expenses for that business.

Cultivators may be allowed to deduct cost of goods sold, Mercer said. Most IRS audits in the cannabis industry are of dispensaries, she said.

A cannabis operator who also has a non-cannabis-product business, such as counseling patients, staffing or equipment-leasing, may be able to deduct expenses and use banking services for federally legal enterprise. "Those entities can have bank accounts," Mercer said. They can also help get around the 280e problem if employees working for federally legal businesses as well as a federally illegal dispensary can be paid primarily under "legitimate" businesses.

In a 2007 tax-court ruling, Californians Helping to Alleviate Medical Problems vs. Commissioner of Internal Revenue, the IRS initially disallowed all deductions as "expenditures in connection with illegal sale of drugs." Then the court allowed some deductions.

"When you have product, you have a profit," Mercer said. "You also have a lot of expenses," she said. "We try to help our clients navigate that sticky situation in terms of their businesses and nonprofits," such as paying staff salaries in cash. Both the state Board of Equalization and the Internal Revenue Service accept tax payments in cash, she said.

Mercer grew up in Oregon. Her father John Mercer serves as a municipal-court judge in Beaverton, a city of 90,000 located seven miles west of Portland. He hears DUII cases involving cannabis.

Oregon's recent experience with taxing the mostly cash-driven cannabis industry could help guide Sonoma County and California. From Jan. to Sept. 2016, Oregon collected more than $40 million in taxes on recreational cannabis sales of about $160 million, according to Joy Krawczyk, public information officer for the cannabis tax program of Oregon's Dept. of Revenue.

Taxes are paid monthly on the previous month's sales. "We're seeing primarily cash payments," Krawczyk said, with a few checks, money orders and cashier's checks, "but it has mostly been in cash." As of June, there were more than 300 cannabis dispensaries paying tax. Recreational pot retailers will begin paying taxes in November on October sales. For comparison, tobacco taxes generated some $130 million a year in recent years.

To curb risks of having multiple cash-laden taxpayers arriving at the tax-collecting office at the same time, the department sets appointments. So far, there has been no attempted robbery at the Salem office, despite the lure of cash. "We have security on site," she said. "It's an all-concrete building. We have a number of security measures in place to protect folks coming in to make payments and our staff." Payments are made through a window. The building was remodeled about a year ago to bolster security.

"We get the majority of our appointments during the last two weeks of the month," Krawczyk said. Dispensaries or retailers hold in trust the sales taxes paid by consumers then give those amounts to the government. If taxpayers skip appointments, show up late or bring larger amounts of cash than expected, "it sets things back for everyone who has an appointment after them," she said. "Folks will be standing around, waiting," laden with bags of bills.

Cash will reign until "these businesses can get access to financial services," Krawczyk said, noting that lack of banking is a problem, especially for retailers. "We are looking for ways to help everyone make payments as easily as possible and keep it as safe as possible until they have other options for payment."

Cannabis sales taxes may rise soon in Oregon. In June 2016, the law allowed sale of edibles and extracts, according to Mark Pettinger, spokesperson for the Liquor Control Commission. "Banking remains a problem across the industry," he said.

Maps Credit Union, headquartered in Salem, has made efforts to serve the cannabis industry in Oregon, Pettinger said. "There are some reporting requirements in this area," Pettinger said. "This credit union has taken the lead. Part of the issue for the banking industry is federal compliance - is it worth the cost."

Todd Sheffield, CEO of Community First Credit Union based in Santa Rosa, has considered serving the cannabis industry. "We don't do it because of federal problems," Sheffield said. "We're going to hold off. Obviously it's on our radar." Though Community First is chartered in California, its deposits are federally insured.

Fiona Ma, a San Francisco-based CPA and former assemblywoman from the 12th District, sits on the Board of Equalization and is a vocal proponent of the cannabis industry, Beck said. "She is a leader in normalizing the cannabis industry," he said, proposing a state-chartered credit union to provide financial services for cannabis enterprises. "Banks are still wary," he said.

Ryan Lowther, a partner at Farella Braun + Martel, is chair of the firm's Cannabis Industry Practice, representing cultivators, manufacturers, retailers and investors. The firm has more than 25 clients in the cannabis industry, selected only if they operate entirely in compliance with state law and have strong chances of gaining needed licenses.

If Prop. 64 passes, most medical-marijuana businesses will expand to meet the market for recreational adult use, Lowther said. "It's now 80 percent of my time," he said, and other lawyers in the firm, which has offices in St. Helena and San Francisco, also serve clients in the industry. The practice has been open more than two years.

"Some clients have been able to get bank accounts," Lowther said, "mostly with relationships they have had with banks. Some clients do not have bank accounts. The ones that do don't tell me who they bank with. They consider it to be a trade secret that benefits their business. It's the biggest issue facing these companies right now. They have nowhere to put all their money. It creates unsafe environments. They're storing cash" and trying to transfer it for payments.

Dispensaries face the greatest problems. "Some dispensaries have figured out how to take credit cards," he said, but all of them do significant business in cash.

Though the cash dilemma persists, investing in cannabis has picked up. "In the last few months, it has become a flood," Lowther said. "I have had many conversations with potential clients who want to start investment funds," as well as individual investors.

"There are a lot of wealthy accredited investors who see this as a good opportunity to get in early," including "investment bankers and those familiar with venture investing," he said. If most states eventually legalize recreational cannabis for adults, Lowther said, the market in a decade could top $40 billion.

Beck agrees. "The market could equal or exceed the wine industry," he said. 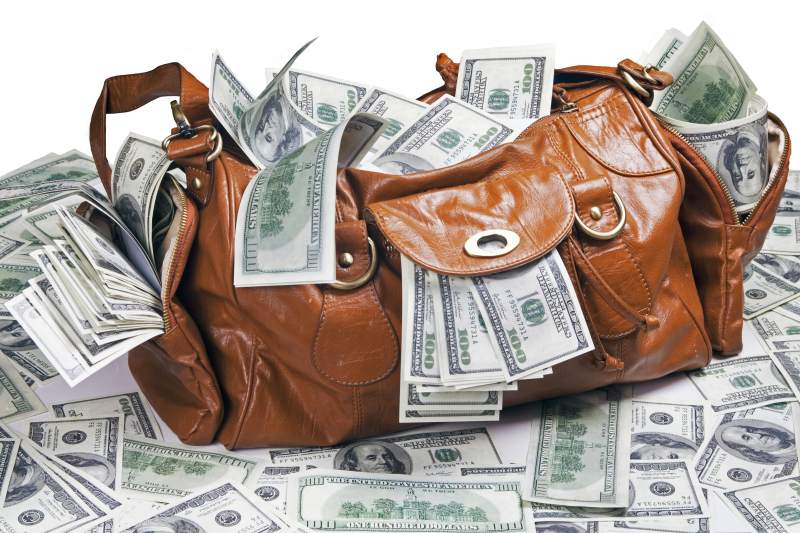