Now We Know What Killed The Ancient 'Ice Princess,' And Why She Had That Marijuana

Did a dying Siberian maiden who lived 2,500 years ago self-medicate with marijuana? New research by Russian scientists shows that's a likely possibility. The mummified body of the Siberian "ice princess" -- so well preserved that tattoos on her skin were still visible when she was found -- was unearthed in an icy plateau in eastern Russia's Altai Mountains back in 1993. Since then, scientists have gained a good understanding of who the ice princess was, and how she and her people lived. But no one knew for sure how the woman, who's believed to have been in her 20s when she died back in the 5th Century B.C., met her end. Until now.

To solve the mystery, a team of Russian scientists using MRI scans determined that the ice princess was likely suffering from breast cancer. "We are dealing with a primary tumor in the right breast and right axial lymph nodes with metastases," team member Andrey Letyagin told the Siberian Times. "I am quite sure of the diagnosis -- she had cancer."

The Siberian "ice princess," also known as the "ice maiden." Tattoos on her arm are visible. Since 2012 the mummy has been housed in a special mausoleum inside the Republican National Museum in Gorno-Altaisk, Russia. The scans also showed that the princess had the bone infection osteomyelitis, Letyagin added. In addition, he said, the scans found evidence of injuries consistent with a fall -- perhaps from a horse.

To cope with the pain she must have been experiencing, the princess could have resorted to cannibis -- a container of the stuff having been found alongside the mummy in her burial chamber. As archaeologist Natalya Polosmak wrote in a recent issue of the journal Science First Hand: "It is likely that for this sick woman, the regular inhalation of cannabis smoke was a necessity." 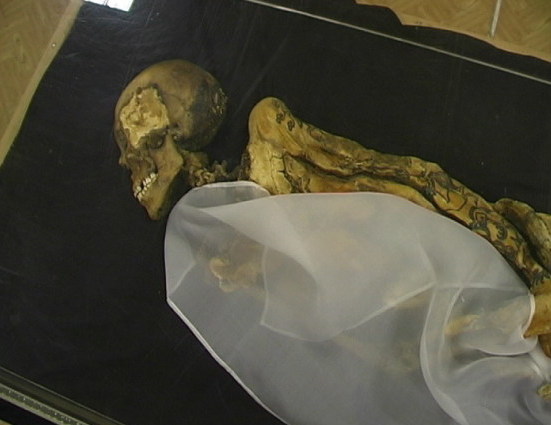 News Moderator - The General @ 420 MAGAZINE ®
Source: Huffingtonpost.com
Author: Dominique Mosbergen
Contact: Contact Us
Website: Now We Know What Killed The Ancient 'Ice Princess,' And Why She Had That Marijuana

Okay, I don't want to be buried with my glass jar of bud, but surely I can request that a nug be cremated with me when I go. (And if the funeral director ends up smoking it herself -- instead of following my instructions -- well, that would be fine too.)

Drug warriors will argue this is more evidence of how cannabis causes a young woman to fall from her horse and become disabled. She's now cursed to have live forever on tribal charity on the backs of the "producers", get tattoos (probably from an "illegal alien") and lose her life to cannabis carcinogens before she's even 30.

pretty cool story my fiance showed me, shes a archaeologist so she comes across these storys often. first one that ive seen that has actually connected the findings of cannabis with the ancient humans and possible medical use. Great read!

K
BC: 'Princess Of Pot' Opens A Cannabis Culture Shop Near Parliament Hill

The Best Ice Cream in Toronto (And It's Hemp Ice Cream!)