Midtown is getting its own medical marijuana dispensary to ring in the new year.

BlÃ¼m - a dispensary chain that also has locations in Las Vegas and in Oakland, Calif. -- is opening its doors at 9 a.m. Jan. 2 at the old Scotland Yard Spy Shop at 1085 S. Virginia St. A grand opening for the dispensary will be held at 1 p.m. Jan. 12, although the dispensary already has opened its doors to patients who want to register for services.

The dispensary, which is in the heart of the fast-developing Midtown neighborhood, will be the 10th in Northern Nevada, according to the Nevada Department of Health and Human Services records.

Inside, it is clean and chic like a modern doctor's office, although the DOPE magazines on the table are a bit of a giveaway. The 25-person office has a sign-in area, a lobby and nine "bud bars," or stations where patients can purchase cannabis with a doctor's note, according to manager Bree Kasper. The office will be open from 9 a.m. to 10 p.m. Sunday through Thursday, and 9 a.m. to midnight on Fridays and Saturdays.

The BlÃ¼m chain is owned by the public-traded Terra Tech company which is based in Newport Beach, Calif. Local developer Heidi Hegerich co-owns the Reno BlÃ¼m operation as part of an LLC known as MediFarm.

By law, the business must purchase products in-state, although BlÃ¼m is the first operation in Northern Nevada authorized to package its own products. The glass bottles used preserve the marijuana, Alvarez said.

The dispensary was supposed to open in April 2016 after Medifarm purchased the $1.2 million property in 2015, Alvarez said, but it experienced setbacks as Terra Tech opened three dispensaries in the Las Vegas area earlier this year.

"We changed things to make sure Reno didn't have the same inefficiencies," Alvarez said.

BlÃ¼m, which started in Oakland and soon plans to open two more dispensaries in the Bay Area, expanded first to Southern Nevada, and looked next to Reno last year after realizing there was some space in the northern market. Only four other dispensaries currently are open within Reno-Sparks city limits.

"One of the things I have noticed about the Northern Nevada area is that the demographic is totally different," said assistant manager Lucas Farrell.

About three quarters of the clientele in the area are baby boomers, according to Farrell, who formerly worked at another local dispensary.

Nevada was one of the first states to allow medical marijuana, and its less stringent regulations are welcoming to businesses. For example, business applicants don't need to be residents of the state, and Nevada offers multi-state reciprocity, which means card-holding patients from other states can buy medical marijuana in Nevada legally.

Nevada's recent passage of a ballot measure that legalized recreational marijuana makes the future that much more fruitful for businesses such as BlÃ¼m. The law makes it legal for anyone over 21 to possess as much as one ounce of marijuana or one-eighth of an ounce of concentrate.

Dispensaries are not currently able to sell recreational marijuana, however, until further regulations have been detailed within state law. 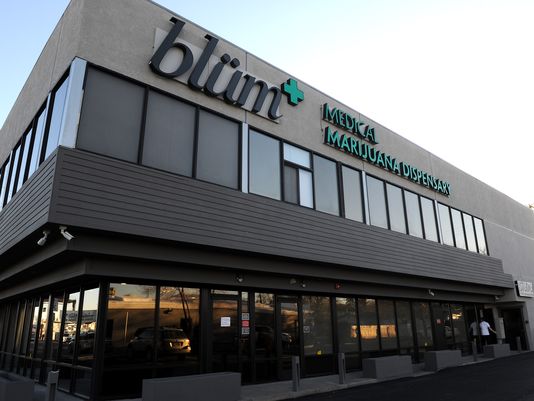