NV: Can You Smoke Pot At Burning Man Legally? It's Complicated

A lot of Burners are wondering if they can burn one thing in particular this year at Burning Man: weed.

Some of the people heading to the 68,000-person arts blowout in the desert two hours north of Reno are hoping to bring cannabis along since it's not exactly a new guest to the party.

"For a lot of people, Burning Man is self-discovery. Burning Man is a place to find yourself in new ways," said Rebecca Gasca, CEO of the Reno-based cannabis consulting firm Pistil and Stigma.

Yet, Burning Man is not just in Nevada. It's on federal land, and, on a federal level, marijuana is still considered a Schedule I drug, which means both medical and recreational marijuana are illegal.

So, can you get arrested at Burning Man for smoking that joint? Yes, but it's complicated.

Burning Man as an organization has taken numerous steps to educate Burners this year, making clear in newsletters and blog posts that the organization has a no-drugs policy at the event, despite Nevada's new law and in-step with federal law.

"You're not exempt from the law at Burning Man, and that is doubly true this year.

I know the laws are evolving around this, and we're in this middle point of figuring it all out, but marijuana is still illegal at Burning Man," said Megan Miller, spokeswoman for Burning Man, which is based out of San Francisco.

Two law enforcement agencies will be patrolling Burning Man, one of them being the Bureau of Land Management, the federal agency that grants the largest recreational permit in the country each year to Burning Man. The multimillion-dollar permit establishes a variety of safety, security and health standards to be followed.

The BLM, in a prepared statement, said its stance on marijuana, including medical marijuana, is unchanged: It will be enforcing the federal prohibition of all marijuana since the event is held on public lands, which make up 80 percent of the state. People found to be in possession of marijuana face fines up to $1,000 and/or imprisonment not to exceed 12 months, according to BLM officials.

Granted, the BLM made no arrests for any crimes last year, nor the year before.

The other agency on the watch at the event will be the Pershing County Sheriff's Office, which last year arrested approximately four dozen people, about three dozen of them on drug-related charges. The most common drug found at Burning Man last year was marijuana, followed by cocaine, ecstasy and acid, according to Pershing County Sheriff Jerry Allen.

This year could prove different, as the deputies will be following the new state law.

"Under an ounce (of marijuana), or under an eighth-ounce (of concentrate), we have no enforcement," said Allen, who has overseen local deputies at the event for the past two years. "If they encounter the BLM on the road, I imagine it will be a different story."

"If they show up with a hay bale of marijuana, it's definitely going to be more than a citation. It's going to be up to the discretion of the officer," he said.

Additionally, due to the danger posed to oneself and others on the road, anyone who is believed to be under the influence of any controlled substance, based on probable cause, is subject to arrest. Some attendees will be subject to vehicle searches, which may be aided by K-9 units from both the BLM and the sheriff's office.

Participants may refuse law enforcement searches of their vehicles, but refusal of searches requested by Burning Man volunteers at the entry gate can result in denied entry.

Nevada's current law establishes that law enforcement can use blood tests, if they have a warrant, to test for marijuana in a person's system for driving under the influence. One of the common issues, however, with testing is that it does not always reflect whether a person is inebriated.

Providing alcohol or drugs to a minor and drug trafficking also are illegal and can carry heavier punishments.

Even if the event were not held on land managed by a federal agency, smoking at the Burn would still be illegal.

"As far I'm aware, it would be illegal to consume openly and publicly regardless," said Mason Tvert, a marijuana policy expert formerly with the Marijuana Policy Project. "If it is a private event, and it's on private property, it might be a different matter."

Under current Nevada law, those consuming recreational marijuana products can only do so in a private residence, which law enforcement and legislators have insisted can only be a home or a front or back porch. That means that festivals, concerts, bars, casinos, hotels, restaurants and other establishments are not permitted to allow marijuana consumption.

Nevada is in a difficult position since much of its marijuana market consists of tourists, who, by definition, do not reside in private residences in Nevada.

"Even that's a discussion that's taking place in a lot of these states: What constitutes as public versus private?" Tvert said.

Gasca said part of the problem is that, even though Burning Man is a private, ticketed event, those tickets are open to the public.

"The broader public – including those that go to Burning Man – seem to think that at Burning Man, anything goes. Burning Man is a fully functioning city for all intents and purposes," she said. 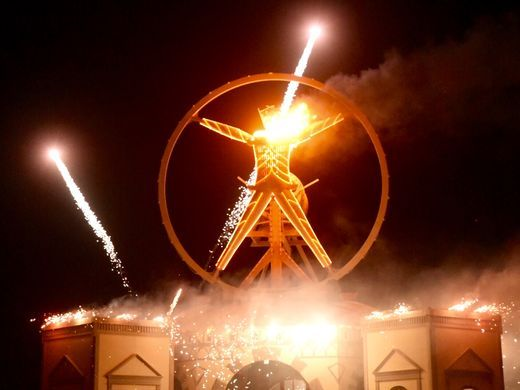 NV: What You Can And Can't Do With Recreational Marijuana