Will Northern Nevada's drug-sniffing dogs still alert for the presence of marijuana after Jan. 1 when it becomes legal? And will they be re-trained not to detect marijuana?

- Short answers: If you or your belongings are subjected to a search by a drug-sniffing dog in Northern Nevada, the dog will alert to the scent of "drugs" even though the drug will be legal. It seems unlikely the dogs will be retrained. After all, more than one ounce of recreational marijuana will still be illegal.

Duane Halgrimson of Wellington wrote a letter to the editor: "With the approval by Nevada voters for ballot Question 2 on recreational marijuana, the present K9 dogs can no longer be used in Nevada after Jan. 1, 2017. As drug detection dogs, they are trained to detect and supposedly alert their handlers of illegal drugs, a vast majority being marijuana. I love dogs, but I have never heard of a dog able to communicate what type of drug they detected — especially if the dog is trained to detect all illegal drugs. That said, when a K9 unit is used to search a vehicle without the owner's permission yet the drug dog alerts his handler of drugs, which drugs? The legal or illegal ones?"

I decided to find out more about the effects of marijuana legalization on the use of drug-sniffing dogs so I started by asking the Reno Police Department what drugs its dogs are able to detect.

Deputy Chief Mac Venzon in the operations division said by email, "The Reno Police Department has five canine/handler teams. Not all of the canines are trained the same. For example, we have a canine that is certified in explosive detection, others that are used for tracking purposes, area searches, article searches; and several that are used for patrol purposes and drug detection. Those that are certified in drug detection are generally certified to detect the odor of marijuana, methamphetamine, cocaine, MDMA (ecstasy) and heroin."

RGJ: Can officers tell which of those drugs the dog is detecting or simply that it is one of them?

RPD: The handler (officer) cannot tell which drug category is involved in the detection. The dog is trained to give an alert to the handler at the detection of the odor, but does not provide a different alert for each of the substances.

RGJ: Is there any way to get the department's current drug-sniffing dogs not to signal the presence of drugs if only marijuana is present?

RPD: Arguably, it may be possible to re-train a canine to not alert to the presence of a substance's odor. The canines work on a reward-based system. When the dogs perform satisfactorily, they are rewarded with a toy and play time with the handlers. While this description is somewhat oversimplified, the process is of re-training is being explored in the event it becomes necessary.

RGJ: Are any changes planned in how drug detection is done with dogs in light of legalization of recreational marijuana?

RPD: Currently, the Reno Police Department's lead trainer, canine handlers and other area law enforcement entities are in the process of looking at best practices, current case law and consulting with our colleagues in other states that have faced this same question. Based on that information, the Reno Police Department will determine the best course of action for our canine teams.

RGJ: Some readers are concerned that they will be subjected to extra law enforcement scrutiny even if they are within the law because of drug-dog detection of marijuana. What would you tell them to ease these concerns?

RPD: This is still an issue that we are looking into with our counterparts in Colorado, Washington and Oregon to see how they have dealt with the issues associated with the canine tool and the passing of the recreational marijuana laws. The Reno Police Department will only enforce those laws that are passed by the legislative process. That is to say, if an individual is within the law, there will be no extra scrutiny.

These same questions were also discussed with Bob Harmon, spokesman for the Washoe County Sheriff's Office. Its dogs detect the same types of drugs as do Reno PD's.

Regarding the ability to get the dogs not to detect marijuana, Harmon said, "At this time, we see no reason to alter the way the sheriff's office dogs have been trained."

The office will monitor legislative actions to determine whether changes need to be made in the future, he said.

As for some readers' concerns about being subjected to extra law enforcement scrutiny for possession of a legal substance, Harmon said, "They have no reason for concern as long as they are not breaking the law. The Washoe County Sheriff's Office will continue to do our best to protect the public and enforce the law just as we always have in the past." 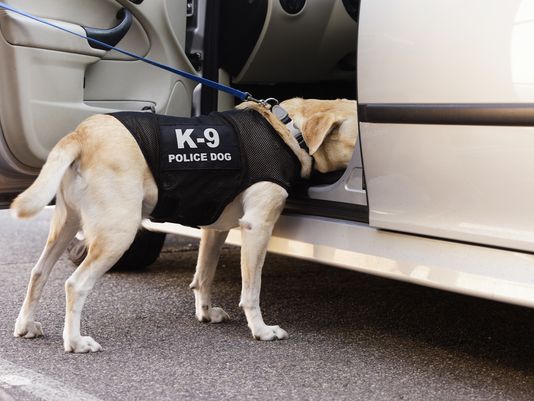 T
Drug Dogs Not Being Trained To Detect Odor Of Marijuana