Reno is getting its own "Bud and Brew Festival" (that's code for pot and beer), but there's a significant catch: There won't be any bud.

The Reno Bud and Brew Music Festival will be a 21 and over celebration complete with entertainment that is set to be held from 10 a.m. to 6 p.m. Sept. 23 in Wingfield Park on the Truckee River. Law enforcement will be on scene to ensure that no public consumption, sale or purchase of marijuana will be taking place at the event.

The riverfront festival will feature music from more than a dozen entertainers as well as booths from a variety of marijuana industry leaders. A beer village -- made up of local craft brewers -- also will be at the event.

Organizers have touted the event as an educational effort, teaching attendees about medical uses for marijuana as well as recreational. The event is being organized by Signature Shaka LLC, a local entertainment group.

Medical use of marijuana has been legal in Nevada since 2000, and recreational use became legal as of Jan. 1 after voters passed a ballot initiative in November 2016 to legal recreational marijuana.

Adults age 21 and over are allowed to possess up to an ounce of marijuana, and an eighth-ounce of concentrate. Driving under the influence of marijuana still is illegal.

Although, Sen. Tick Segerblom authored a bill earlier this year that would have allowed businesses and events to have marijuana consumption on their premises, the bill failed to pass. The Legislative Counsel Bureau recently responded to a query from Segerblom, telling him that the law already allows local governments to permit marijuana consumption at certain businesses and events.

The city of Reno, however, is currently reviewing the opinion and has yet to decide whether it will allow for licensed consumption.

Artists performing at the event will include: 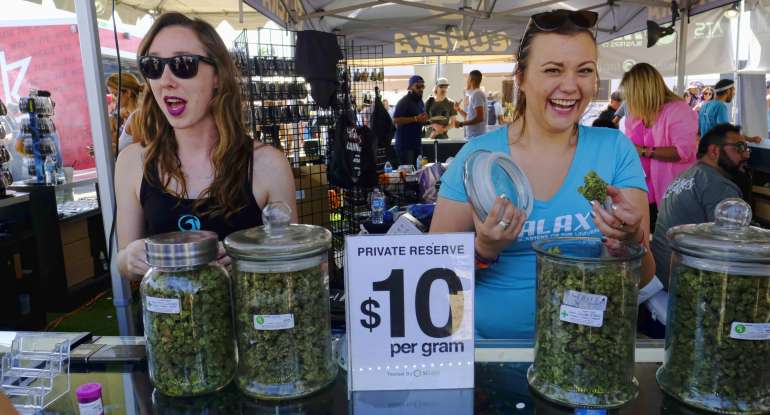 NV: What You Can And Can't Do With Recreational Marijuana

T
MARIJUANA FORUM TO BE TELEVISED