Marijuana stores want to be part of Sin City's 24/7 life. Cannabis dispensaries in Clark County are permitted to be open from 7 a.m. to 3 a.m., but the county's Green Ribbon Panel on Friday said it wants to advise commissioners to extend marijuana store hours.

Crime is one of the biggest reasons dispensaries want the always-open option, the panel said during its first meeting since recreational marijuana sales became legal on July 1.

Several panel members said they believe that would deter the dispensaries from being targeted in the wake of a string of robberies – all of which happened during the four-hour period when dispensaries are closed.

The proposal would have to be approved by Clark County commissioners.

The panel touched on a range of topics during the meeting that could shape how marijuana businesses operate in the future in unincorporated Clark County.

Cannabis to your door

Will marijuana home deliveries be allowed when the state enacts permanent regulations next year?

Companies can currently deliver up to 1 ounce of marijuana to customers as part of the temporary regulations adopted while the state irons out permanent rules to be in place by Jan. 1.

But Department of Taxation's most recent draft of those regulations would prohibit pot home deliveries.

Green Ribbon panelist Andrew Jolley, who owns The+Source dispensaries and serves as president of the Nevada Dispensary Association, said illegal delivery services are a common and problematic issue across the valley.

"A regulated, tested market is a much better alternative than the black market," Jolley said.

The state, however, said delivery regulations will likely be included when a new draft of the rules is released later this month.

"I would expect to see home deliveries allowed," said department spokeswoman Stephanie Klapstein. "What we're really examining right now is seeing how to set it up so that its heavily regulated."

But issues remain. Jacqueline Holloway, Clark County's business licensing director, told the panel that the county received a complaint from an marijuana dispensary employee who said they were mandated to deliver marijuana products in their personal vehicle.

The panel did not make a recommendation on home deliveries, saying it would be better to wait for the state's regulations.

The ever-sticky topic of marijuana consumption lounges popped up again at Friday's meeting.

In the spring the panel discussed the possibility of launching a pilot program for consumption lounges, but decided to hold off to see if the Nevada Legislature would pass any laws on the topic.

A bill that would have permitted various forms of public pot use seemed to have momentum, but died after Gov. Brian Sandoval voiced his opposition.

Seeing that caution from state lawmakers should tell the county that it should tread cautiously on the issue, said panel member and Nevada Gaming Commission Chairman Tony Alamo.

"I think we need to walk slowly and methodically," Alamo said.

But Jolley argued that the tourists coming to Las Vegas have no place to consume the now-legal product, and the county should explore proceeding with its own regulations rather than waiting for the Legislature, which won't meet again until 2019 barring a special session.

"If we made every decision based on failed legislation, nothing would get done," Jolley said. "We do need to look at these tourists in the eye and give them a valid option."

Holloway noted that state Sen. Tick Segerblom, D-Las Vegas, requested a legal opinion from the Legislative Counsel Bureau on whether local governments could regulate public consumption lounges without a state law being in place.

The county's director of aviation, Rosemary Vassiliadis, noted that advertising of marijuana would continue to be banned at McCarran Airport, and pointed out that the airports in Denver and Portland – cities in states with legal marijuana – have similar bans.

Vassiliadis also said 20 "amnesty boxes" will be installed at McCarran and other airports in Clark County, where travelers would be able to safely get rid of any marijuana before going into the TSA sections of the airport. Marijuana is regulated federally as a Schedule I drug with the likes of heroin and ecstacy.

Drop boxes at McCarran would be located inside the parking garage and before the ticketing counters, Vassiliadis said. 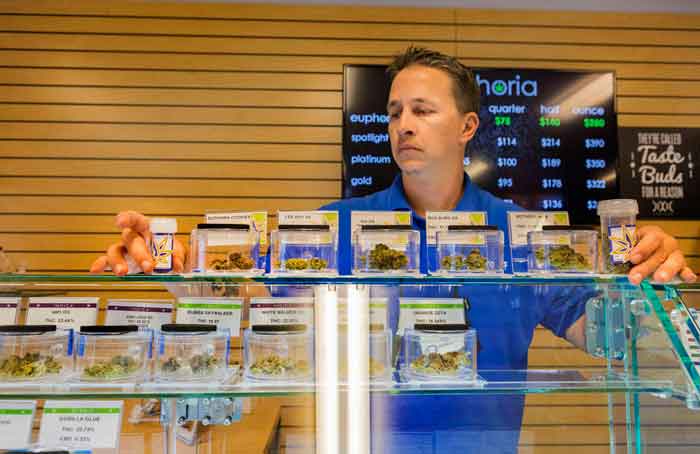