What happens in Vegas will still stay in Vegas — but perhaps no longer behind closed doors, at least when it comes to pot.

Earlier this week, Nevada's Legislative Counsel Bureau gave the green light for marijuana to be permitted in public places, as long as patrons are of legal age. Citing a lack of state law, the bureau said cities and counties could create their own ordinances governing marijuana consumption in businesses.

Pro-marijuana advocates hailed it as a logical next step for the state, which was the most recent to legalize recreational weed. Nevada started allowing adults 21 and older to buy it on July 1, but like the other four states where it's legal, restricts its use to private residences.

That's posed a particular challenge for Nevada, where the economy is highly dependent on visitors who stay in hotels and play in casinos.

State Sen. Tick Segerblom, D-Las Vegas, a dogged champion of marijuana legalization, sees the opinion from the state legal body as an opportunity to turn Sin City into "Amsterdam on steroids."

"We’re inviting 40 million people to come here and buy marijuana, but then we turn around and say there’s no place to use it," Segerblom said of the annual influx of tourists who go to Las Vegas.

"I think Vegas is perfect for this," he added. "That’s what we do. We regulate vices."

The bureau issued its opinion in a letter on Sunday to Segerblom, who had requested clarification on Nevada law after a measure earlier this year that would have legalized so-called pot lounges died in the state legislature.

Segerblom said pot lounges could be standalone venues with dispensaries, similar to the coffee shops in Amsterdam that sell edibles.

Or existing businesses, like bars, bed and breakfasts, massage parlors, and even yoga studios, could provide a place for adults to consume marijuana, he said.

The one place unlikely to allow pot is casinos, which follow gaming regulations and could jeopardize their state gaming license as a result.

On Tuesday, Commissioners in Clark County, which encompasses Las Vegas, will decide whether they want to pursue any ordinances surrounding public pot consumption. Segerblom said he doesn't expect anything to be enacted until next year at the earliest.

Still, the development puts Nevada on the forefront of allowing pot in public spaces. Similar measures are being considered in other states, including Alaska and Colorado.

"We’re very pleased to see that the legislature is taking seriously the need for there to be social consumption regulations in place to give those who chose to responsibly consume cannabis the opportunity to do so in a manner similar to how we have bars for alcohol," said Justin Strekal, political director of the National Organization for the Reform of Marijuana Laws (NORML).

But the move has its detractors, too, including Nevada's Republican governor, Brian Sandoval.

Sandoval, who opposed the lounges when the measure came before the state legislature in the spring, told the Las Vegas Review-Journal he feared they would attract unwanted federal scrutiny.

Anti-legalization groups said they worried about how closely regulated the marijuana sold at lounges would be and what the impact would be on the surrounding areas.

And Kevin Sabet, who heads the anti-legalization group Smart Approaches to Marijuana, felt the marijuana industry was misinterpreting voters' intention when they voted to legalize pot.

"I don’t think the average Nevadan is going to appreciate having a pot lounge in their backyard or their community," he said.

Segerblom, the state senator, argued people are already consuming it in public.

He anticipated cities and counties will issue limited licenses to let businesses try out pot lounges "on an experimental basis," but said he predicted it being successful in Las Vegas.

"Frankly, I think marijuana fits in with our image," he said. 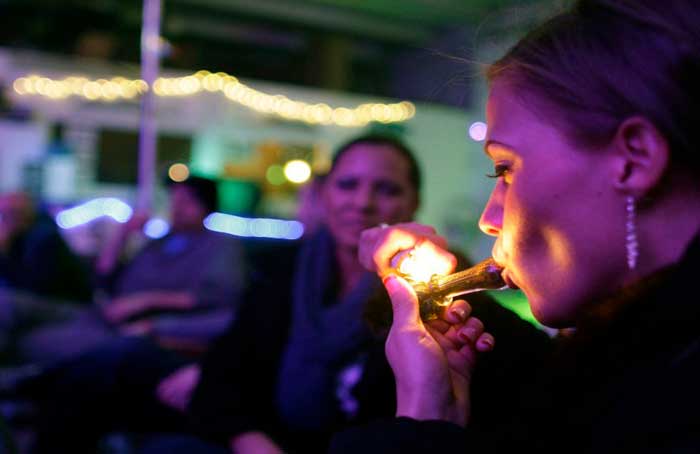