The New York State Assembly, in a move that was largely symbolic, on Wednesday approved legislation that would make New York the second-largest state to legalize medical marijuana.

The 90-50 vote marked the third time the Democrat-dominated Assembly approved such legislation, which would allow patients registered with the state to possess up to 2 1/2 ounces of marijuana or grow as many as 12 plants.

The Republican-led Senate, however, has never allowed the bill to come up for a vote, largely because the proposal contradicts federal law. It is unlikely to allow a vote on the bill this session.

"It is cruel to deny treatment to patients who are suffering or to turn them into criminals," Assemblyman Richard Gottfried, the bill's sponsor, said in a statement. Gottfried said the measure would help thousands of people while enacting the strictest medical-marijuana regulations in the country.

Seventeen states and the District of Columbia have legalized medical marijuana, and eight of them, including California, Connecticut and Michigan, permit dispensaries to sell it. Under the New York proposal, patients could purchase marijuana at pharmacies and hospitals or from non-profits certified by the state.

Marijuana is used to alleviate nausea, pain and anxiety and has been shown to benefit some patients who suffer from HIV/AIDS, cancer, epilepsy and multiple sclerosis, among other ailments, according to a memo accompanying the bill.

In a May 16 editorial published in the New York Times, State Supreme Court Justice Gustin Reichbach of Brooklyn, who has pancreatic cancer, implored the legislature to pass the proposal. Inhaled marijuana, he said, is the only medicine that relieves his nausea, stimulates his appetite and makes it easier to sleep.

"This is not a law-and-order issue; it is a medical and a human rights issue," Reichbach wrote.

In April Gov. Andrew Cuomo, a Democrat, told reporters that he is opposed to legalizing medical marijuana but that he is studying the issue.

Lawmakers in at least five other states, including Massachusetts and Illinois, are considering medical-marijuana legalization, and voters in Ohio will vote on the issue in November.

The federal government has approved a synthetic form of THC, the active ingredient in marijuana, for medical purposes in pill form but medical marijuana remains illegal under federal law.

The U.S. Justice Department under President Barack Obama has conducted raids and prosecuted growers and owners of medical marijuana dispensaries. 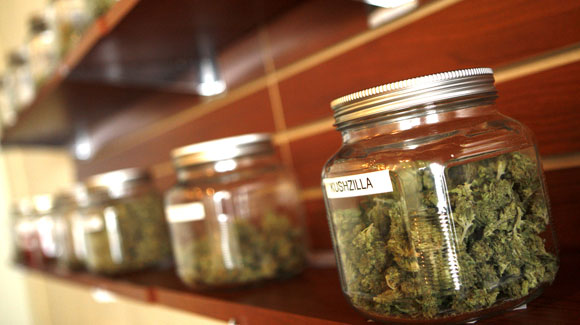