NYPD Commissioner Has Some Extremely Dubious Claims About Marijuana

NYPD Commissioner Bill Bratton said on a local radio show over the weekend that marijuana is responsible for the "vast majority" of New York City's violence, adding that it makes him "scratch his head" as to why states want to legalize marijuana.

"I have to scratch my head as we are seeing many states wanting to legalize marijuana, or more liberalization of policies."

Morgan Fox of the Marijuana Policy Project told ThinkProgress that Bratton's claims are "extremely dubious," and would be highly dependent on how "involving marijuana" is defined.

Given the scope of crime in New York, pinning "most" of it on marijuana seemed to be a leap, he said. Crime statistics - because of the myriad of factors involved, from socioeconomics to happenstance - are notoriously difficult to parse. But one thing that seems certain is that a rise or fall can't often be pinned on a certain factor - particularly not marijuana.

Prohibition is the root cause of the vast majority of violence associated with marijuana.

Studies have repeatedly shown that marijuana is not correlated with acts of violence. In fact, alcohol, a legal, regulated commodity, is significantly more likely to be involved in acts of violence and aggression. Numerous scientific studies have also shown that marijuana is less addictive, and has fewer negative impacts on health. A 2014 study from the University of Texas at Austin also showed that that legalization, even of just medical marijuana, might be correlated with a decrease in violent crime.

Even if Bratton's base association of crime with marijuana were accurate, instead of making him scratch his head, Fox says it ought to be an argument for legalization.

"Prohibition is the root cause of the vast majority of violence associated with marijuana," he told ThinkProgress.

"Most of the time I hear people making that claim as an argument in favor of marijuana policy reform, and making it legal and regulated similarly to alcohol. When these businesses or people involved in the marijuana market can take their problems to a court of law instead of dealing with them in the street, they obviously are going to choose to do so."

"It's just really strange, hearing people use the violence associated with the criminal market as a reason not to regulate that market. It just doesn't make any logical sense," Fox said.

"Most of the time I hear people making that claim as an argument in favor of marijuana policy reform."
This isn't the first time Bratton has linked marijuana to crime. Last year, Bratton blamed an increase in homicides on marijuana, saying that it was a "seemingly innocent drug" that was nonetheless the root cause of the increase - a claim which Gabriel Sayegh of the Drug Policy Alliance said was a causal leap.

Reforms in recent years have led to the relative decriminalization of marijuana in New York City, though the drug - and sales of it for recreational use - remain illicit. Former Mayor Michael Bloomberg issued an executive order eliminating jail time for low level possession in 2013, and two years ago Mayor de Blasio mandated that a person possessing less than 25 grams be given a ticket, not arrested.

Decriminalization, however, wouldn't have quite the same effect as marijuana legalization on crime. While it might save the country vast amounts of money in enforcement costs, it still leaves marijuana use and sale in a grey, unregulated area legally – which can lead to the sort of crime Bratton was presumably talking about. And despite this liberalization there were more arrests for marijuana during de Blasio's first term than under Bloomberg's leadership in 2013 – 86 percent of which were of blacks or Latinos. 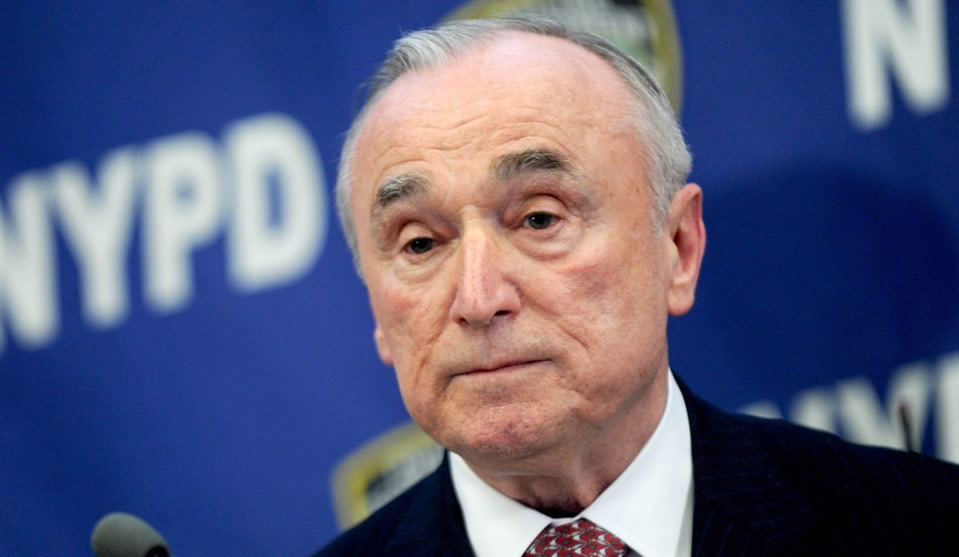 If I was the head of a police force that has 34,000+ uniformed officers (, 4,500 Auxiliary Police Officers, 5,000 School Safety Agents, 2,300 Traffic Enforcement Agents, and 370 Traffic Enforcement Supervisors) and the likelihood of a resident of that city getting mugged/robbed/burgularized was still so high that, instead of people flipping out when it happens and blogging about the crime via the Internet, it is more likely to see people state, "We only had our stuff stolen X times last year - so it was a pretty good year," then I might try blaming crime on cannabis.

For that matter, I might try blaming crime on aliens.

That man ought to know that prohibition is almost never the answer - at least he ought to know it if he has an IQ equal to or better than that of a rutabaga. I just read that violent crimes involving firearms in NYC are on the rise (again) - yet, it's harder to (legally) own a firearm in NYC than it is in the rest of the state, which is not exactly a walk in the park in and of itself, lol. Even if you've successfully jumped through the hoops required to get a permit to own a pistol in the state of New York (yes, they require a permit - just like Hitler's Germany did :rolleyes3: ), you can't legally carry that pistol into NYC. For that, you've either got to have a special NYC permit (practically impossible to get) or to have the NYPD Commissioner (yeah, that guy mentioned above, lol) issue you a special permit which validates the state permit for use within the city limits. Even with that level of near 100% firearm prohibition... you can still get shot whilst walking down the street (you just cannot legally defend yourself with a firearm).

Yeah... Billy boy has far more pressing things to worry about than cannabis.

Considering the fact that ANY police department is going to have finite manpower and other resources, it is logical to believe that if the head of any of them doesn't make cannabis a very low priority, it either means that real crime within that jurisdiction is basically nonexistent... or that head is a <BLEEPING> idiot (or has political aspirations, I suppose - does this clown fancy himself as a future NYC mayor, lol?).
Respectfully,
Tortured Soul

Truth is the laws against Marijuana is what is causing all the violence and suffering not the plant material itself.
Remo nutrients RDWC Sterile Res

What Actually Happened To Violent Crime After Washington Legalized Marijuana