DJ "Mack" McIntosh has spent the best part of the last 17 years lobbying New Zealand politicians and bureaucrats for the right to grow industrial hemp in this country.

As chairman of the New Zealand Hemp Industries Association, he believes the industry has largely succeeded in that battle but the bright future for this versatile agricultural crop is still constrained by the stigma of association with its cousin marijuana.

Politicians have always thought of industrial hemp as a "trojan horse" for the legalisation of marijuana, he explains. Although they come from the same genetic pool, he says they are very different plants.

"I want to see industrial hemp removed from the Misuse of Drugs Act because it is not a drug and people don't grow it as a drug," he says. He believes it is only included in legislation by default because the authorities can't tell the difference between it and marijuana.

McIntosh maintains that industrial hemp has "indescribably low levels of THC", the psychoactive ingredient in marijuana, so it is of no use to anyone who wants to use it as a drug anyway.

Conversely, industrial hemp has high levels of cannabinoids, an exciting possibility for growers to extract this compound for use in the manufacture of medicinal cannabis for the relief of chronic health issues, such as cancer.

"Everyone has dollar signs in their eyes over cannabinoids," he says. "All of a sudden the finance and economics of growing industrial hemp have changed dramatically."

One of a new generation of cultivars he has developed in New Zealand is capable of producing a kilogram of seed from every plant. By definition that means each plant could produce a kilogram of heads from which growers could expect to extract four grams of cannabinoid oil, which currently sells for $150 a gram.

So a single hemp plant is theoretically capable of producing $600 worth of cannabinoids.

He has been working on a significantly improved cultivar of a variety of hemp that was developed from a breeders' selection of plants that originally came from the Gulf Institute in Canada.

He has grown one hectare under licence for three years in a row and harvested up to 8.5 tonnes a hectare, yields he believes could revolutionise the hemp industry here and overseas.

"I think it's quite exciting but I just have to live long enough to see it," he says. "I think we're pretty close now, not only to a cultivar that could put New Zealand on the map but also that could take the world by storm."

"It will either survive because it is as good as I say it is or it won't because it's not," he says when he makes it commercially available next season.

Next week is Hemp Awareness Week and the New Zealand Hemp Industries Association is running workshops around the country encouraging farmers to grow the crop commercially.

"We need to start building capacity and by building awareness, we hope we'll build membership and hopefully capacity at the same time," McIntosh says.

However, it is a Catch 22 situation. Without a supply of industrial hemp there is no demand for its many byproducts and without demand there is no supply.

Currently there are about 30 licensed growers of industrial hemp in New Zealand, including some larger growers, and interest is increasing because of the likely relaxation of legislation controlling the sale of hempseed products as foods in November this year.

"Once we reach critical mass, the industry will take off with a life of its own, but it hasn't reached critical mass yet," McIntosh says. "I don't even know what critical mass will be but our goal is to see 10,000 acres grown. That's not huge but it's not insignificant either."

McIntosh reckons if New Zealand cropping farmers get advice on how to grow this versatile crop, learn how much they could make off it and who they can sell it to, they may consider growing it as part of their crop rotation.

He says his cold-tolerant Aotearoa1 variety grows particularly well in Otago and Southland, where it reaches a maximum height of about two metres. For every degree of latitude north it is grown, hemp grows half a metre taller, making it harder to harvest.

Its deep roots make it a very good soil rejuvenator and break crop between grain crops. It has been used to extract heavy metals from mining sites, as a gross nitrogen feeder to absorb nitrogen in land reclamation trials around freezing works and to capture nutrients in sensitive catchments like the Taupo Basin.

Industrial hemp products are used in the manufacture of a huge range of products, ranging from construction materials, insulation, textiles, fibres for clothing, canvas, paper, ropes and carpets. 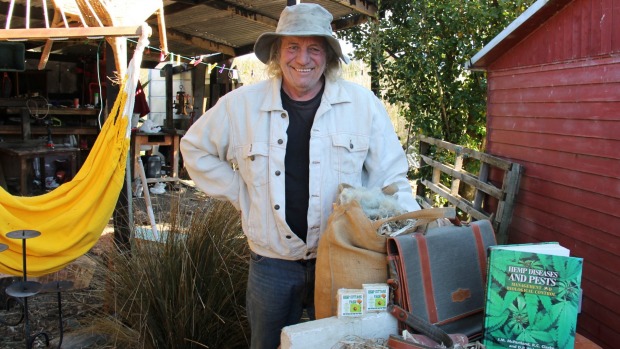 Commercial Hemp Crop Gets Go Ahead