Business has been booming as word continues to spread that Lisa Jensen offers a unique product for pets.

For more than two months now, Jensen has been selling treats, oils and ointments containing cannabidiol – or oils extracted from the cannabis plant – to provide some relief for Oklahomans' sick and aging pets.

Jensen, who owns Mann's Best Friend in southwest Oklahoma City, obtains the product from a distributor. She then sells it for between $19.99 and $80.

For decades, state leaders outlawed the sale of products containing derivatives of the cannabis plant.

But a little more than two years ago, they quietly passed a measure allowing Oklahomans to buy such products as long as they don't contain traces of tetrahydrocannabinol – or THC – the psychoactive chemical found in marijuana.

A much-publicized expansion of same law also allows Oklahomans suffering from specific severe illnesses to obtain cannabidiol with no more than 0.3 percent THC, under the supervision of a doctor.

Oklahoma stores are not allowed to sell the latter, but Oklahomans seeking the version without THC now can stroll into convenience stores, pet stores, vape shops or health foods outlet and buy it.

Meanwhile, the decision to allow businesses to sell to the public has created a haze of confusion and concerns in a state that still outlaws most marijuana products, experts say.

Some business owners, for instance, fear they'll unwittingly sell oils containing THC, which could land them in handcuffs or facing the seizure of thousands of dollars worth of inventory, officials say.

But, for businesses willing to risk navigating a new frontier, owners say it's allowing them to cater to clientele who have long craved access to a non-intoxicating form of cannabidiol, also known as CBD oil.

"We've really had to fight to get where we are," said Jimmy Shannon, chief operating officer of Norman-based Ambary Health, which makes and distributes THC-free products to businesses around the state.

"At this point in Oklahoma, people are just happy CBD is legal and it's just accessible to them," he said.

It's not clear how many businesses actually are selling the oil or how easy it is to find on store shelves. State law doesn't require licensing or registration.

"The CBD (store) legalization was more like an afterthought," he said. "There were some people who thought (selling) pure CBD was legal. We kind of cleared that up in the law because that was what was happening anyway."

If questioned, it's up to participating Oklahoma businesses to provide certified laboratory results that the cannabidiol products they're selling are compliant with state law, said Mark Woodward, a spokesman with the state Bureau of Narcotics and Dangerous Drugs.

"We're not being very heavy-handed with our prosecution right now unless they're egregiously thumbing their noses (at the law)," he said. "We've been kind of giving them a grace period. Stores and companies are just navigating these new waters."

It's too expensive to test every product on the market, so Woodward's agency has tested fewer than a dozen cannabidiol products being sold. The majority of those have come back free of THC, he said.

Woodward said the agency has encountered some "fly-by-night" companies based out-of-state – mainly in California and Colorado where marijuana is legal – that claim they have invented a process that allows them to extract 100 percent THC.

Not all products though are necessarily THC-free as promised, he said.

"We've sent a lot of warning letters to (out-of-state) companies over the last couple of years," Woodward said. "For the most part, the burden is on the stores if they're claiming it's 0 percent THC. If somebody wanted to go in and test it and file charges, and it comes back positive, they could."

That's left some businesses wary about selling the products.

"For a while there, people were nervous about carrying the product," said Shannon, the Norman businessman.

Shannon's company sells products to distributors in McAlester, Edmond, Stillwater, Chickasha and Lawton. They've also been fielding calls from as far away as China.

Some owners, he admits, have been concerned that police will show up and seize cannabidiol products. He tries to alleviate those concerns through meetings with local police departments and by educating businesses and consumers about the new law.

Last year, his Norman vapor shop had about $7,000 in product seized by Norman's police department.

A city police spokeswoman said a drug dog with the U.S. Postal Service hit on a package containing cannabidiol lotions, teas and oils that was bound for the shop. With Shannon's cooperation, officers seized the package and sent the contents to the Bureau of Narcotics' laboratory for testing.

Authorities said the products did ultimately test positive for a small amount of THC, but they opted not to charge Shannon, chalking it up to a misunderstanding about the provisions of the new law. Police said they did not return the Shannon's products, nor did Shannon seek to have them returned.

Woodward also noted there still are lingering questions about just how effective oil is that doesn't contain any psychoactive substances.

While some swear by it, "I've hard some people say it's nothing more than snake oil," Woodward said. "It's up to users to determine if zero-THC (oil) does any good." 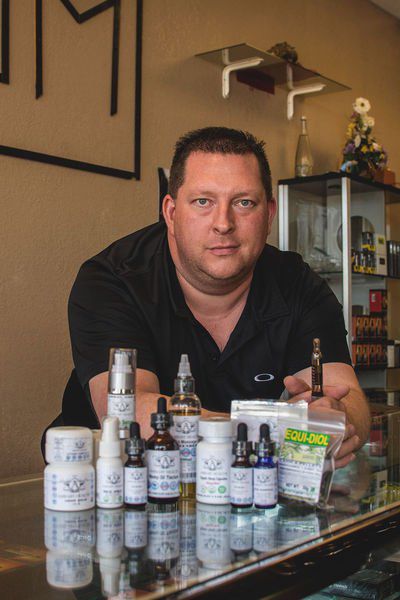 IN: In Kokomo, CBD Oil Is Flying Off The Shelves