Proponents of medical marijuana have banded together in another grassroots effort under the name of Green the Vote.

Petitions for State Question 778 are in the hands of volunteers and select businesses, and 123,725 legal signatures must be turned into the state by Dec. 29.

The initiative is to change the "classification of marijuana as an herbal drug, permitting the use thereof under the recommendation of a board certified physician," according to the summary on the Oklahoma Secretary of State website. It proposes an amendment to the Oklahoma Constitution.

The amendment states provisions and qualifications for the reclassification of marijuana; specifics on the sale, manufacturing, and distribution of paraphernalia; and consumption and possession of medical marijuana. The details of regulation by the Oklahoma State Department of Health are given, along with the tax rate and distribution of proceeds. Cases where discrimination to holders of medical marijuana licenses are prohibited is also stated.

New to this proposed amendment, versus 2014's SQ 768, is the section regarding industrial hemp.

Most of the buzz about the petition, though, has to do with the medical marijuana sections.

"We are patients for patients," said Dody Sullivan, administrative coordinator for Green the Vote in Tulsa. "We want people to have a chance and the people of Oklahoma to have a say."

Sullivan, who suffers from a rare disease, said the medical community has nothing to offer her, and pharmaceuticals won't help.

"I'd like to try something else," said Sullivan. "It's a natural path of God — a plant put here on Earth. We're not saying everyone has to try it. It's a matter of mercy for me."

Mercy and the quest of legal medical marijuana have sent some Oklahomans across state borders.

The family of 8—year—old Zoey Johnson moved from Perry, Okla., to Colorado in 2014, in search of relief from the symptoms of Dravet Syndrome, a rare form of epilepsy. Before moving and using forms of cannabis, Zoey was having up to 100 seizures every 15 minutes. Now she has gone from being on 27 pharmaceuticals to being on four pharmaceuticals and cannabis, according to her mother, Mallory Jo Johnson.

"Our family grew up just like the majority of the rest of the state [Oklahoma]. 'Marijuana was bad, it was a gateway drug,' but the reality is, it's not! Marijuana is actually an exit drug. But truthfully, when your child is dying and you have run out of options, you will try anything and do anything to keep them alive," said Johnson.

Johnson, who said her family has been speaking with legislators since 2013, acknowledges Oklahoma did make changes by passing Katie's Law earlier this year, which allows seizure patients to be treated with cannabis oil.

"It doesn't even help all the children who have Dravet Syndrome, like Katie of Katie's Law. Zoey has to have THC [tetrahydrocannabinol] as well as CBD [cannabidiol], but that doesn't mean she gets high at all," said Johnson via email. "There are so many different components of the cannabis plant and each component has medical benefits to it."

Qualifying conditions for medical marijuana were outlined in the 2014 state question, which failed to get enough legal signatures on its petition. SQ 778 only states the process of how one would obtain a license. Upon approval from an Oklahoma state board-certified physician and the Department of Health, people with a wide range of medical conditions could qualify.

Merle Welch, a Tahlequah resident who volunteers for Green the Vote, said that when she has been out with the petition, it has been "mostly older people who stop and sign."

"It's been weird. I expected the younger generation to be knowledgeable, but it's been the older generation looking for it," said Welch. "They want this as an option. I've heard so many stories. We all personally know someone affected by an illness that could be helped."

Welch has been helping with GTV since October and is one of over 600 volunteers throughout the state. She said she got involved to help people.

"People in my family have suffered or passed away from cancer that wouldn't accept chemo because they couldn't afford it. Medical marijuana wasn't an option. If it was, they probably would have taken that option to improve health," she said. "This is especially important for the refugees."

Families such as the Johnsons are called "refugees" because they have left their home states to seek relief. Though there are groups of refugees and others to help newcomers, Oklahomans often do not have family or personal ties in the new state.

"Colorado insurance doesn't cover the expense of cannabis, so that is an out-of-pocket expense. The cost of living in Colorado is at least twice as expensive as Oklahoma," said Johnson. "Everything and everyone we know and love are in Oklahoma. Family events and births and illnesses — we are missing out on everything."

Sullivan moved from Colorado 20 years ago and still has family there.

"I have grandbabies here. I don't want to leave," she said. "This is my home; this is my community."

She expects the number of petitions coming in to the GTV office to increase soon. Currently, they've received less than half of the signatures needed to get the initiative on the 2016 ballot. 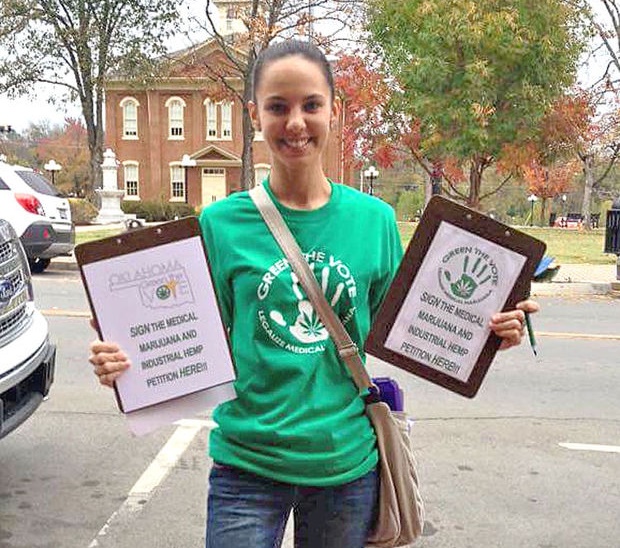