ON: Study To Test Cannabis In Kids With Epilepsy

Toronto - Researchers at Toronto's Hospital for Sick Children are poised to begin a clinical trial using cannabis extracts to treat children with severe epilepsy whose seizures can't be controlled with existing medications.

The trial is believed to be the first in Canada to test an oral preparation that contains both CBD and THC, compounds in marijuana that have been shown in the lab and through anecdotal reports to have anticonvulsant properties in children with treatment-resistant epilepsy.

CBD, or cannabidiol, is one of hundreds of active chemicals in the marijuana plant, many of them touted to have medicinal properties. THC, or tetrahydrocannabinol, is the psychoactive ingredient that produces the "high" associated with pot.

While research has found CBD to be effective in reducing seizures, there has been no rigorous study that's looked at the combination of CBD and THC, said pediatric neurologist Dr. Blathnaid McCoy, who will lead the clinical trial that begins early next year.

But finding a new therapy is critical: despite doctors having an arsenal of more than 40 anticonvulsant medications, 30 per cent of their patients with severe epilepsy are unable to get their seizures under control with any of the drugs.

"There are severe developmental, cognitive, behavioural, and motor delays that happen when children have uncontrolled epilepsy," said Catherine Jacobson, director of clinical research at Tilray, a B.C.-based medicinal marijuana producer that will be providing the oral CBD-THC preparation for the clinical trial.

"It's an absolutely devastating disease to live with," said Jacobson, whose seven-year-old son has intractable epilepsy. "So the need to develop new medications that will control seizures in these children is very high."

The Sick Kids study will enrol 20 children aged one to 18 with Dravet syndrome, a rare and debilitating form of epilepsy that begins in infancy. The condition, which is caused by a genetic mutation, accounts for about one per cent of all cases of epilepsy.

"It varies massively, but (children with) Dravet syndrome often have multiple seizures every day and they can have quite prolonged seizures," said McCoy. "And in line with that, they also have a significant disruption in normal development, so they can have challenges with their mobility, with feeding difficulty, with interactions.

"Certainly when the epilepsy is difficult to control and very treatment-resistant from early on, they can have catastrophic outcomes in terms of their development," she said.

Dawn Bellefeuille's youngest son Sean is one of those children.

He suffered his first seizure at two months old, and they grew worse and more frequent over time, said Bellefeuille, who has three older children who aren't affected by the condition.

Sean's seizures, which sometimes number 40 a day, have severely delayed his development. At 13, he is virtually non-verbal and can't dress, feed or toilet himself. He attends a special-needs school, but needs round-the-clock care.

"He's been on umpteen different drugs since he was born," Bellefeuille said from Ottawa. "He didn't take his first steps until be was four years old; he didn't sit up on his own until he was 18 months old."

While Sean is still taking a couple of standard anticonvulsant medications, it wasn't until his parents started giving him a high-CBD, low-THC cannabis oil that the number of their son's daily seizures dropped dramatically, allowing him to cognitively advance.

"He said 'Mom' for the first time a year ago," said Bellefeuille, describing her son as a mischievous imp with a grin that makes "all your troubles just go away."

"The first time he had a temper tantrum, we cheered because he never showed a preference for anything," she said. "It's only been the last two years that cognitively he seems to be coming alive, and it's only been since the CBD oil was introduced."

Bellefeuille purchases the cannabis oil on prescription from Cannimed, a licensed medicinal marijuana producer in Saskatoon, for about $600 a month.

But she said it's trial and error for parents to decide what dose is safe and most effective for their child because research to guide both doctors and families hasn't been conducted on CBD-THC combinations.

The Sick Kids trial will look at how well the CBD-THC combination is tolerated by test subjects, what side-effects may emerge, and what dose seems optimal.

If the safety and dose-related results are favourable, researchers would then follow with a larger randomized control trial, in which half the participants would get the cannabis drug and the remainder would receive a placebo, to see if the CBD-THC treatment is superior in reducing or eliminating seizures.

Bellefeuille said she would enrol Sean in such research "in a heartbeat" if it could help determine what cannabis preparation would be ideal for her son, whose seizures since starting cannabis oil are down to about one "bad one" a day.

"I'm not asking for zero. While that would be ideal, I just want him to be able to learn and to advance further than he's capable of doing now," she said.

"I want him to be able to fly to the best of his ability." 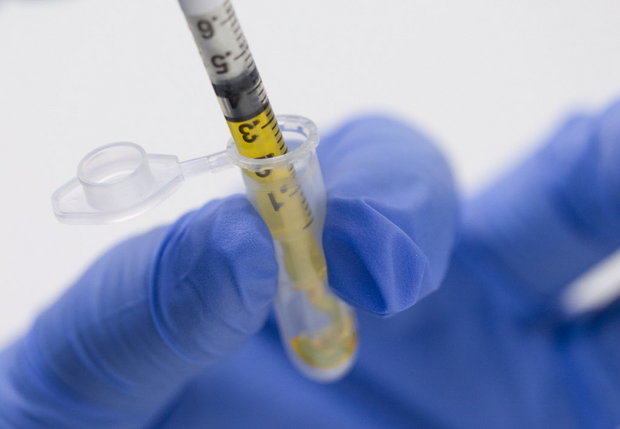