One Marijuana Arrest Occurs Every 42 Seconds In U.S.: FBI Report

With just over one week before voters in Colorado, Oregon and Washington states will decide whether or not to legalize and regulate marijuana for adult use, the FBI released a startling new report revealing that police in the U.S. arrest someone for marijuana every 42 seconds.

According to the FBI's Uniform Crime Reporting data, there were a total of 1.5 million drug arrests made nationwide in 2011, and out of those arrests, about 750,000 were for marijuana (just under half, 49.5 percent) -- that's one marijuana arrest every 42 seconds and one drug arrest every 21 seconds in the U.S.

And although those numbers are down slightly from 2010, members of Law Enforcement Against Prohibition (LEAP) -- a group of law enforcement officials who are advocating for an end to marijuana prohibition -- pointed to the figures as yet another sign that the nation's War on Drugs is failing.

"Even excluding the costs involved for later trying and then imprisoning these people, taxpayers are spending between one and a half to three billion dollars a year just on the police and court time involved in making these arrests," Neill Franklin, a retired Baltimore narcotics cop who now heads LEAP, said in a statement. "That's a lot of money to spend for a practice that four decades of unsuccessful policies have proved does nothing to reduce the consumption of drugs. Three states have measures on the ballot that would take the first step in ending this failed war by legalizing, regulating and taxing marijuana. I hope they take this opportunity to guide the nation to a more sensible approach to drug use."

Key statistical takeaways from the crime report are as follows, but the full report can be read in full here:

Nationwide, law enforcement made an estimated 12,408,899 arrests in 2011. Of these arrests, 534,704 were for violent crimes, and 1,639,883 were for property crimes. (Note: the UCR Program does not collect data on citations for traffic violations.)
The highest number of arrests were for drug abuse violations (estimated at 1,531,251 arrests), larceny-theft (estimated at 1,264,986), and driving under the influence (estimated at 1,215,077).
The estimated arrest rate for the United States in 2011 was 3,991.1 arrests per 100,000 inhabitants. The arrest rate for violent crime (including murder and nonnegligent manslaughter, forcible rape, robbery, and aggravated assault) was 172.3 per 100,000 inhabitants, and the arrest rate for property crime (burglary, larceny-theft, motor vehicle theft, and arson) was 531.3 per 100,000 inhabitants.
Two-year arrest trends show violent crime arrests declined 4.9 percent in 2011 when compared with 2010 arrests, and property crime arrests decreased 0.1 percent when compared with the 2010 arrests.
Arrests of juveniles for all offenses decreased 11.1 percent in 2011 when compared with the 2010 number; arrests of adults declined 3.6 percent.
Over 74 percent (74.1) of the persons arrested in the nation during 2011 were males. They accounted for 80.4 percent of persons arrested for violent crime and 62.9 percent of persons arrested for property crime.
In 2011, 69.2 percent of all persons arrested were white, 28.4 percent were black, and the remaining 2.4 percent were of other races.
The FBI report comes just days after a similar report from the Marijuana Arrest Research Project (MARP) about marijuana arrests specifically in Colorado, where Amendment 64 -- which seeks to regulate and tax marijuana similarly to alcohol -- is on the November ballot.

According to MARP, over the past 25 years more than 210,000 people have been arrested for marijuana possession in Colorado -- and of those arrests, communities of color have been disproportionately impacted.

The "Marijuana Possession Arrests In Colorado, 1986-2010" report based on FBI Uniform Crime Report data offers a first-ever glimpse into the racial breakdown of marijuana arrests in Colorado that includes Latinos, who according to the MARP data, have been arrested at a rate 50 percent greater than that of whites. African-Americans who are also disproportionately affected by Colorado marijuana law, are arrested at a rate three times that of whites.

Along with the MARP report, the Campaign to Regulate Marijuana Like Alcohol -- the pro-pot group behind Colorado's Amendment 64 -- also announced new data from the Colorado Bureau of Investigation that showed marijuana possession arrests in the state were up nearly 7 percent in 2011 compared to 2010. The campaign linked that data to an August report from the Colorado Center on Law and Policy that projected $12 million per year in criminal justice savings if Amendment 64 passes in Colorado.

Marijuana legalization has become an issue that defies the stereotypes of party lines, garnering the support of key progressives and conservatives in Colorado, Washington and Oregon. And although all three states have pot initiatives on their ballots, Colorado and Washington's pot ballot measures appear to be quite popular with voters, according to recent polling.

In Colorado, if marijuana is legalized it would be taxed and regulated similar to alcohol and tobacco. It would give state and local governments the ability to control and tax the sale of small amounts of marijuana to adults age 21 and older. According to the Associated Press, analysts project that that tax revenue could generate somewhere between $5 million and $22 million a year in the state. An economist whose study was funded by a pro-pot group projects as much as a $60 million boost by 2017.

In Washington, a 25 percent excise tax would be in place if the state passes Initiative 502, which state revenue experts say could generate as much as $1.9 billion over the next five years, The Seattle Times reported. If passed, the initiative would allow adults 21 and older to buy up limited amounts of marijuana or marijuana-infused food products and would create state-licensed growers and retailers.

The Associated Press reports that if Washington's I-502 passes:

Public use or display of marijuana would be barred.
No marijuana facilities could be located near schools, day cares, parks or libraries.
Employers would still be able to fire workers who test positive for pot.
It would remain illegal to privately grow marijuana for recreational use, though medical patients could still grow their own or designate someone to grow it for them.
It would be illegal to drive with more than 5 nanograms of THC, the active ingredient of cannabis, per milliliter of blood, if the driver is over 21; for those under 21, there would be a zero tolerance policy.
However, the big unknown still is if the federal government would allow a regulated marijuana market to take shape. Attorney General Eric Holder, who was a vocal opponent of California's legalization initiative in 2010 saying he would "vigorously enforce" federal marijuana prohibition, has continued to remain silent on the issue this year.

In September, Holder was urged by by nine former heads of the U.S. Drug Enforcement Administration to take a stand against marijuana legalization again. "To continue to remain silent conveys to the American public and the global community a tacit acceptance of these dangerous initiatives," the nine said in the letter to holder obtained by Reuters.

Earlier this month those same DEA drug warriors joined by former directors of the Office of National Drug Control Policy on a teleconference call to put additional pressure on Holder to speak out against Colorado's marijuana measure as well as similar initiatives on the ballot in Washington state and Oregon.

The drug warriors say that states that legalize marijuana for recreational use will trigger a "Constitutional showdown" with the federal government.

With a week before Election Day, the DOJ has yet to formally announce its enforcement intentions regarding the ballot measures that, if passed, could end marijuana prohibition in each state. The clearest statement from the DOJ came from Deputy Attorney General James Cole, who said his office's stance on the issue would be "the same as it's always been." During a recent appearance on "60 Minutes" Cole elaborated, "We're going to take a look at whether or not there are dangers to the community from the sale of marijuana and we're going to go after those dangers," Reuters reported. 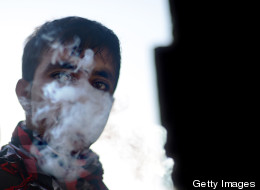 The hawks circle like vultures, they can't stand to see people free
Let's vote to pass these measures, and reclaim Constitutionality
420 Magazine®
Creating Cannabis Awareness Since 1993

J
Every Minute, Someone Gets Arrested For Marijuana Possession In The U.S.