OR: Getting Twisted With My Feline Friends

Until very recently, it was impossible to safely get turnt with your furry roommates. But finally, the future is now: The creation of cat wines and CBD weed infusions promises to make the ritual of guzzling pinot alone while re-watching Friends just a little less sad.

I decided to see if my party cats, Biggie (tuxedo, 15 years old) and Augustus (orange AF, four years old), were down to hang. I brought home a bottle of Apollo Peak Pinot Meow and an infusion of CBD, and we went on an interspecies bender. I was sooooo excited to share my passion for getting absolutely blitzed off Trader Joe’s wines with those I love the most. So much potential lay ahead for my relationship with my two cats.

Apollo Peak is based in Colorado and makes bottles of “Catbernet” and “White Kittendel” for (anti)social drinkers like me. They contain no alcohol, because that would kill your kitty. Instead, it’s an all-natural blend of catnip and other allegedly cat-pleasing ingredients.

I twisted off the top of my $6.99 bottle from TJ’s and got ready for a night of realtalk, carefully pouring their $9.95 bottle of Pinot Meow into a bowl with a cat on it so they’d know it was for them. As I eased into my second glass, I realized that beyond an initial sniff, neither cat was interested in their drink.

Just to make sure my cats aren’t judgy teetotalers, I offered it to four other cats, and not a one wanted to party with me. I HAVE NEVER FELT MORE BETRAYED. Cat wine is a SHAM and now I have NO CAT ENABLERS for my wine habit.

Unlike cat wine, CBD is purported to have positive side effects for pets that could help with stress and anxiety, seizure control, arthritis, and pain relief. These animal formulas have zero THC, so unlike my friend’s dog, who ate an unattended bag of weed brownies, they shouldn’t freak out, take a huge shit on the floor, and pass out.

I had higher hopes for the CBD, mostly because Biggie has arthritis in his hips, and I need Gus to chill the fuck out and stop singing the song of his people at top volume at four every morning. Plus, I’m totes down to share a tuna snack.

Because there are actual drugs involved, I checked with my cats’ vet about CBD. While most conventional vets won’t specifically prescribe it for cats or dogs, ours didn’t say it was dangerous. Go to a holistic vet if you want maximum guidance.

I also consulted with Pakalolo on Southeast Holgate, one of the best places to find treats and oils for cats and dogs. Pakalolo owner Justin Riggs says he’s been dosing his three dogs with CBD for separation anxiety, seizures, and other quality of life issues, and it’s worked. The dogs padded about the house-turned-pot shop and seemed pretty chill.

Pakalolo has actual treats for dogs, but for my cats, I grabbed a pet-specific infusion of olive oil with hemp ($40) and treated myself to a BOG Bubble ($45), a nice sativa/CBD concentrate. I gave the oil to my little fellas via an eyedropper (just a few drops to start), fired up my pen, and turned on old episodes of Deadwood.

Biggie, my older cat, seemed to really be feeling the vibe. His general ability to lie completely still for hours seemed enhanced, and he was even more excited than normal for ear scratches. He walks with an arthritic hitch in his getup, and after two doses seemed more willing to jump.

Gus, the orange idiot (who we love very much), didn’t slow his roll too much. He’s already Garfield-level obsessed with food, so that didn’t change, and he again started meowing at 3:59 am. (HOW DOES HE KNOW WHAT F*CKING TIME IT IS? IT IS CAT SONG SORCERY.)

We’re still early in the CBD game, but I think the effects are promising thus far. Though I didn’t have the late-night drunken bonding sesh that I’d hoped for with the world’s best species, I’m pretty sure we’re not far from some hemp-infused chill times. This might be the weed talking, but don’t shareable munchies—Meowritos, anyone??—sound real good right now? 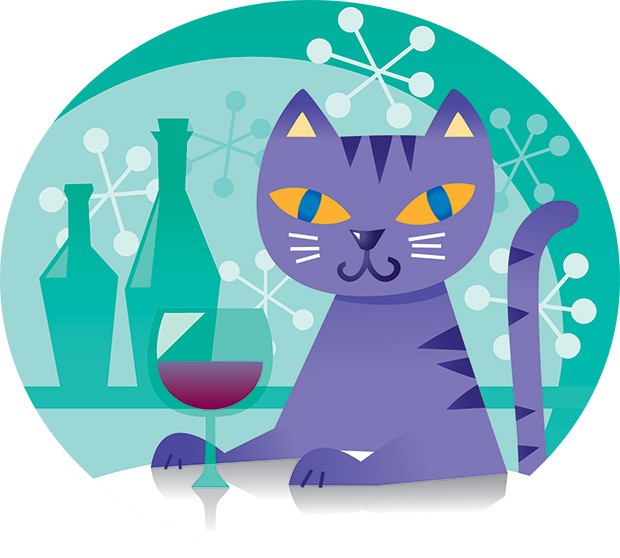 Its For The Cats