Ypsilanti has continued its pursuit to prevent the "saturation" of medical marijuana facilities within the four square miles of city limits.

The City Council approved 4-1 the first reading of an ordinance to limit the number of medical marijuana dispensaries and grow facilities allowed at its July 16 meeting.

Council first visited this issue in May, after Richardson and Councilmember Ricky Jefferson voiced concerns earlier this year about the growing number of medical marijuana facilities in the community.

Since then, Council discussed an emergency ordinance suggested by City Attorney John Barr that would have placed a moratorium the issuance of any new licenses and permits for medical marijuana facilities for 60 days.

City council rejected the emergency moratorium in June</a> after several councilmembers expressed their concerns about using an emergency ordinance to accomplish their end-goal of simply capping the number of facilities in the city.

The issue has now returned to city council in the form of an ordinance to amend to the city code that will limit cap the number of medical marijuana dispensaries and growing facilities in the city where they are currently and terminate any licenses that cease operations for 90 days or more.

Several residents have repeatedly come before Council in support of the cap on medical marijuana facilities, citing particular concerns about the possibility for a new dispensary at 539 S. Huron St.

"I highly encourage council to vote yes to cap the number of dispensaries in Ypsilanti," lifelong resident Brian Foley said at Tuesday night's meeting. "Drug use continues to affect our community because of our history."

"We do not need any more drug houses in the city of Ypsilanti," Tooson said. "Get out on the streets and find out what's happening and you'll know how to conduct business in your city. All they are is a bunch of dope dealers."

Dispensary owner Jamie Lowell, of 3rd Coast Compassion Center at 19 N. Hamilton St., supported Council's move away from an emergency ordinance, but disagreed that there needs to be a cap on the number of facilities in the city.

"This council action is the proper way to address problems, but in these circumstances there are no problems to address," Lowell said. "There is no proof that dispensaries in the community have caused issues. Why fix what ain't broke?"

The discussion of capping medical marijuana facilities leaves new dispensary owner James Nemeth in limbo. Nemeth, who is currently in the application process for a license to open up shop at 539 S. Huron St., is concerned about his investment and is facing criticism for opening his business in that neighborhood, which is in Ward 1.

Nemeth said that he's invested over $5,000 and has met every requirement to open his new business. "I think coming into the community and what we've done to the property, it's going to be a benefit to the community," he said.

Jefferson, who represents Ward 1, is upset to see a new dispensary going up in his neighborhood which was once riddled with drug use.

"It's disrespectful to come in our neighborhood and demand a place," Jefferson said. "I'm going to support this ordinance and I feel that council should also support this neighborhood that has been cleaned up. That neighborhood was so bad that you couldn't walk down the street without being solicited for what kind of drug you want to buy... We've had it once and now we're going to make sure that it doesn't happen again."

Some councilmembers are still not convinced that the city needs to tighten regulations on medical marijuana facilities.

"The emergency moratorium was the wrong tool to do what people wanted to accomplish," Robb said Tuesday, a sentiment that was echoed by Mayor Paul Schreiber. But while Schreiber supported a standard ordinance, Robb did not.

Vogt was also skeptical about the effectiveness of an amendment to the city code.

"Whether we go with eight to nine maximum [dispensaries] instead of six, or four to five maximum [growing facilities] instead of three, it's not that big of a difference," Vogt said. "The volume of marijuana sold and the number of patients will not vary. The only thing that will change that is state law."

Vogt also addressed some residents' concerns about illegal drug use in the community, saying that there is no logical connection between substance abuse and the number of medical marijuana facilities in the city.

"We know that people who use any illicit drug will use it anyway. People who use street drugs do it because they have some kind of psychological issues or they're looking for a thrill. It has nothing to do with if there is a medical facility because they're not going to a facility for that purpose," he said. "We don't shut down pharmacies and hospitals."

"What happens in our community sometimes and most of the time defies all logic," he said. "Being a part of my neighborhood for over 54 years, it doesn't matter whether it's a legal drug or a drug that's solicited in the streets, it finds a way to be sold on the streets. It finds a way to get into families and homes, to destroy homes, and it causes children to be without parents and without guidance."

For the ordinance to go into effect, it must pass a second reading. City council will make its final vote on the issue on Tuesday, Aug. 6. 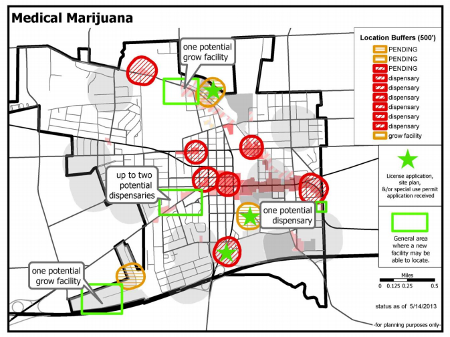