The John Day City Council is considering a two-pronged approach to controlling medical marijuana businesses as its one-year moratorium on the pot shops comes to a close.

The council, at its meeting March 20, reviewed a draft ordinance to limit the hours, location and manner of operation of such businesses.

The council decided to go a step farther, however, and look at an outright ban on medical marijuana dispensaries within the city limits.

The council is expected to take public comment and vote on the ban at its next meeting, on Tuesday, April 14. Passage would be as an emergency measure, allowing it to go into effect before the city's moratorium runs out May 1.

However, while the council is leaning toward a ban, the draft measure regulating operation of such businesses won't be for naught.

The council is looking at also adopting the business regulations, which would exist as a fall-back position should the ban be repealed in the future.

John Day is one of several cities in Grant County — and 142 across the state — that adopted the one-year moratoriums on medical marijuana businesses last year, after the Legislature gave them that option.

The Mt. Vernon City Council also is scheduled to consider a "time, place and manner" medical marijuana ordinance on April 14.

The John Day Council is seeking community input on both ordinances at its meeting, which begins at 7 p.m. Tuesday at City Hall. Copies are available for review at City Hall or on the website at cityofjohnday.com.

In a release this week, John Day officials said the council felt "the unique characteristics of medical marijuana dispensary operations and their potential impacts necessitate the establishment of particular reasonable time, place and manner regulations for such operations."

The city also would establish a separate permitting process for the dispensaries.

City Manager Peggy Gray said adoption would put the restrictions in place but they would go into effect only if the ban ends.

The proposed regulations would outlaw the operation of medical marijuana dispensaries within 1,000 feet of schools and other sites used for "youth development activities," which include non-school activities such as sports, recreation, tutoring and music lessons.

The proposed regulations also address accounting and record-keeping requirements, and information for background checks on operators and others with a financial interest in the business.

The dispensaries would be limited to hours to 9 a.m. to 7 p.m. Monday through Saturday, and would not be allowed at the site of a grow operation. Minors wouldn't be allowed on the premises unless they are cardholders and accompanied by a parent or guardian purchasing the marijuana.

The ordinance also would require tamper-proof labeling and other safety measures for edible marijuana products. 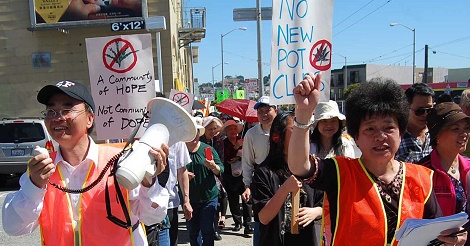