Dave McNicoll has a few words of advice for those planning to try marijuana-infused edibles for the first time: Take a bite, not too much, and wait.

McNicoll's group, the Oregon Responsible Edibles Council, has launched a public education campaign aimed at preventing novice marijuana consumers from eating too much all at once.

The campaign is called "Try 5," as in 5 milligrams of THC, and encourages consumers to start with a low dose when it comes to marijuana-infused snacks and treats.

Or as they say in Colorado, start low and go slow.

The campaign comes just weeks before the latest major development in Oregon's recreational marijuana program: Starting June 2, anyone 21 and older may walk into a medical marijuana dispensary and buy marijuana-infused edibles, extracts and topical products, like balms and lotions.

The expanded sales are part of the state's slow rollout of its recreational marijuana program, which is not set to officially launch until later this year. Lawmakers last year gave dispensaries the go-ahead to start recreational sales early by selling a limited amount of cannabis flowers, plants and seeds to anyone 21 and older. This year, lawmakers added pot-infused edibles, extracts and topical products.

Until now, marijuana-infused treats and foods have been available only to medical marijuana patients and their caregivers. Makers of these products said they welcome the expanded customer base but worry that rookie consumers will overindulge on tasty snacks and treats only to regret it hours later when their potent effects set in.

McNicoll's group has spent about $5,000 on the campaign, which includes posters, some produced on hemp paper, T-shirts and buttons that he hopes to distribute to all of the nearly 350 dispensaries selling on Oregon's recreational market.

McNicoll said his group wants to protect people from having a lousy experience on their first cannabis-infused edible.

"We want to be very proactive," said McNicoll, whose Eugene company Dave's Space Cakes makes mini chocolate cupcakes. "We want to show the state that we care so much about this issue and we are trying to be as safe as possible. We are willing to fund it ourselves."

Edibles pose a challenge for state regulators in states with legal marijuana, like Oregon, Colorado and Washington. The products are popular and often potent. Even a bite-sized candy can pack a punch. Onset is often delayed by an hour or two, prompting inexperienced consumers to eat more and compound the effects.

Even for experienced cannabis consumers, a strong dose of an edible can be too much.

"My max is 5 milligrams," said Leah D'Ambrosio, who owns Sconed, a Portland company that makes cannabis-infused toffees. "If I have more, I am done. If I ate an edible that was 10 milligrams, I would be so high."

State regulators have spent a lot of time in the past year crafting rules for the sale of marijuana-infused edibles and ultimately settled on concentration limits half of what Colorado and Washington allow. That policy decision was guided largely by public health concerns about novice consumers and children who might unintentionally consume pot-infused treats.

Though the Oregon Health Authority established a 5 milligram serving size for edibles that will be sold on the recreational market once the Oregon Liquor Control Commission takes over regulating sales later this year, the package limits under the so-called early start program allow for more potent products.

Under state rules for early sales, dispensaries may sell a single-serving, low dose edible that contains up to 15 milligrams. Packages may contain multiple servings, but they don't have to be marked off for consumers.

Jonathan Modie, a spokesman for the health authority, said it would be a challenge for manufacturers to make consistent 5 milligram products because the low potency level can be difficult for labs to measure.

He said state officials hopes processors "would clearly delineate smaller 5 milligram serving sizes within that low-dose package. And they don't have to aim for 15 milligrams. They can go lower."

That's unlikely, said McNicoll. After all, when it comes to marijuana, potency sells. He said he expects most products on the early start market will come in a 15 milligrams.

McNicoll said the state's decision to allow the higher concentration limit makes his message even more essential for novice consumers.

"It's more important to get that out now: 15 (milligrams) is going to be too much for some people," he said. "People need to know they don't need to eat the whole candy bar." 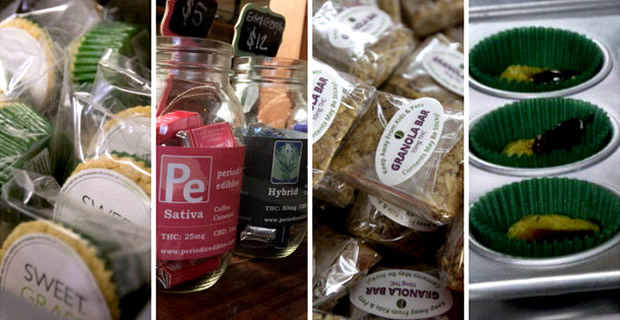 Effective June 2, adults 21 and older may walk into a medical marijuana dispensary and buy marijuana-infused edibles, extracts and topical products. The expanded sales are part of the state's slow rollout of its recreational marijuana program, which is not set to officially launch until later this year.