Oregon Marijuana Legalization Is Inevitable, So Do It Right 2 Retired Prosecutors Say

Norm Frink and Mark McDonnell, two former Multnomah County prosecutors with tough-on-crime reputations, say they decided after the 2012 election that marijuana legalization was coming to Oregon. That's the year that Washington and Colorado became the first states to legalize marijuana -- and that an under-funded and much more wide-open legalization initiative in Oregon failed by less than 7 percentage points. "It's going to happen," said Frink, who retired last year as the county's chief deputy district attorney. "This is just a political fact in Oregon, even if some people don't want to admit it."

As a result, Frink and McDonnell, who headed district attorney's drug unit before retiring, on Tuesday announced that they wanted legislators to refer a marijuana legalization measure to voters in November. In doing so, the two former prosecutors broke with the Oregon District Attorneys Association, the Oregon State Sheriff's Association and the chiefs of police association. For anybody who knows the two, it would be hard to dismiss them as just another pair of Portland liberals That's particularly true of Frink, who backed pro-death penalty legislation and was involved in ballot measures to toughen violent crime sentences and boost victims' rights.

"Stormin' Norm Frink was the most red-meat-eating prosecutor in Multnomah County history that I'm aware of," said veteran Clatsop County District Attorney Josh Marquis, who nevertheless disagrees with the two on legalizing marijuana. The announcement by McDonnell and Frink boosts support for legislation from Sen. Floyd Prozanski that would send voters a ballot measure to legalize marijuana while leaving most of the regulatory details up to the Legislature. Prozanski argued that it would be better for the Legislature to develop a system for regulating the possession, production and sale of marijuana instead of leaving it up to an initiative developed by advocates. "I was pleasantly surprised" to pick up the support of the two former prosecutors, said Prozanski, noting that the two may have more freedom to speak freely on the subject now that they are retired.

Prozanski, who chairs the Senate Judiciary Committee, held a hearing on his legislation, Senate Bill 1556 on Tuesday, and may seek to move it out of committee on Wednesday. McDonnell and Frink, who've negotiated plenty of plea deals in their time, haven't given Prozanski a blank check. Instead, the two said they want to see some changes in his bill before they can embrace it. Frink said the two want to put off allowing legal possession of marijuana until after the Legislature figures out how to set up a regulatory system. McDonnell said he also wants to limit possession to one ounce of marijuana and prohibit the private growing of pot, unless it's by somebody with a medical marijuana card. Currently, SB 1556 would ask voters if they want to allow 21-and-over adults to possess up to eight ounces of dried marijuana and four plants in private, and one ounce in public, starting on Jan. 1, 2015.

Prozanski said he plans to amend the bill to lower that to six ounces of marijuana and three plants. But he didn't express support for changing the effective date for legalizing possession. The senator is also talking with officials from New Approach Oregon, a well-funded group working on its own initiative. Prozanski said he hopes it will back off on its own measure if the Legislature refers one to the ballot. Paul Stanford, who sponsored the 2012 marijuana initiative and is now collecting signatures for two more, said that if the Legislature acts, he might well drop an initiative on how legalized marijuana would be regulated. But he said he will likely go ahead with a measure that would give adults the constitutional right to possess marijuana, subject to regulation.

McDonnell and Frink both made it clear that they don't think other drugs should be legalized -- and they both turned aside questions about whether they wished that there wasn't so much public support for legalizing marijuana. "My personal opinion is irrelevant at this point," said McDonnell, adding that he is "just trying to deal with reality." Marquis, the Clatsop County district attorney, said he disagrees that it is inevitable that Oregonians will legalize marijuana. He said he thinks a legal market would bring a host of problems. Better to stick with the current system, he said, in which it's a non-criminal citation to possess small amounts of marijuana and the use by adults in private is generally a low law-enforcement priority. "We're very tolerant of marijuana as it is," Marquis said. 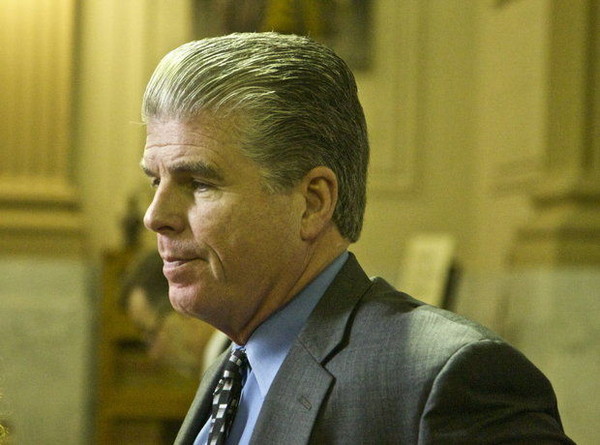 Re: Oregon Marijuana Legalization Is Inevitable, So Do It Right 2 Retired Prosecutors

why are these folks so afraid of advocate's doing the regulations ? we the people should rule, in vermont laws are made to some degree in town hall style voting. in any event let the people in on it. skyhigh robert

T
At Cannabis Legalization Hearing, Question Is How Much Regulation Should Go To Voters