Matt Price sells 100 different kinds of edibles, tinctures, buds and other marijuana offerings to the patients who frequent Cannabliss, the medical dispensary he opened up in a historic brick building that once served as a fire station. Unlike in Washington, Price's medical-marijuana business is licensed by the state, and all the pot he sells is subject to mandatory testing and labeling.

The 28-year-old entrepreneur says he's now ready for his next step – an expansion into recreational marijuana if Oregon voters pass a measure this fall that would legalize pot sales to anyone 21 years of age or older. "We've had inspections," Price said, referring to medical-marijuana dispensaries. "We're already abiding by the laws. So being first up for recreational makes logical sense."

The expansion of Oregon medical-marijuana marketers into recreational sales would mark a very different industry evolution than in Washington, where there is a sharp separation between heavily regulated pot shops open to all adults and a much bigger medical-marijuana trade with scant government oversight. In Oregon, the wording of the 35-page ballot measure assures that there would be plenty of other differences from the legalization of marijuana in Washington:

One study by EcoNorthwest for initiative proponents projects that the state's recreational marijuana could sell for $145 an ounce, which is far less than prices now charged in Washington recreational stores. "We definitely learned the need to implement an effective tax rate that brings marijuana out of the criminal market into the regulated market," said Anthony Johnson, an Oregon attorney who is the initiative's chief petitioner.

Pot votes in 3 places
Voters in Alaska and the District of Columbia also will cast ballots this fall on whether to legalize recreational pot. In Oregon, proponents are hoping to build on the momentum created by successful legalization initiatives approved in 2012 in Washington and Colorado. The state has one of the highest marijuana-use rates in the nation and legions of skilled growers who grow renowned strains of pot on secluded rural acreage, much of it in Southern Oregon.

The measure has some high-profile supporters, including U.S. Rep. Earl Blumenauer, the long-serving Oregon Democrat who has argued forcefully for legalization. But that doesn't mean that legal pot is just around the corner. In 2012, Oregon voters rejected a legislative initiative. And a Survey USA poll conducted for KATU-TV in late September found that Oregonians backed the measure only by a 44 percent to 40 percent ratio. The heaviest support was among young people ages 18 to 34, who typically don't turn out in force in midterm elections.

"I would not be surprised if it fails. It is very much up in the air and a fairly close race right now, " said Tim Hibbitts, chief political analyst for DHM Research in Portland. Supporters have raised about $1.7 million, nearly 10 times the amount raised by opponents. But the No On 91 campaign, largely funded by the Oregon State Sheriffs' Association, has mounted a more organized campaign than opponents to Washington's 2012 initiative.

The group's director, Mandi Puckett, is a substance-abuse counselor and mother of three who has focused on the risks that children could face from having marijuana in the house. At a Portland news conference last week, she held up a large 8-ounce baggy stuffed with hops to represent the amount of legal marijuana that could be kept in a home, along with an array of candies and other sweets that, in Colorado, may now be infused with marijuana.

"These products appeal to kids. I do not want my child to take a gummy bear from a friend at school and think it's a gummy bear, when it's actually marijuana," Puckett said. The initiative also faces ambivalence, and even outright hostility, from some of those who make their living from marijuana. Some growers worry that legalization will result in costly new regulations and open the door to big corporate players who will dominate the markets.

"It's definitely buzzing out there. There are people definitely dead-set against it," said a longtime grower in Southern Oregon who said he is still undecided on how to vote and asked to remain anonymous. "These are people whose main goal with any government agency has been to avoid them at all costs," said Matt Walstatter, a dispensary owner and indoor cultivator who is working to build support among growers for legalizing marijuana. "Now we're asking them to step out of the shadows to trust that they are going to be safe, and to make public a lot of things that their livelihoods depend on hiding. And taxes are one of those things."

Medical-pot foundation
Should Oregon voters approve recreational marijuana, the current medical-pot system may serve as the foundation of a broader industry. The use of medical marijuana in Oregon is far more regulated than in Washington. Oregon's 16-year-old medical-marijuana law requires patients who use the drug to register with the state and pay an annual fee of up to $200.

The nearly 70,000 Oregonians who currently have medical cards can buy their pot from more than 150 dispensaries registered with the state. And the dispensaries must get all their marijuana tested at laboratories that check for mold and pesticides, and assess THC and cannabinoid levels marked on labels. In Washington, only recreational pot goes through such tests.

The Oregon Liquor Control Commission will select licensees and develop regulations. "If it passes, we're going to take to the road all around the state of Oregon and hear from the communities ... and then we're going to make decisions," said Rob Patridge, chairman of the Oregon Liquor Control Commission. Price is hoping that his firehouse dispensary, which opened in 2011 in a hip part of southeast Portland, won't face any opposition to developing a recreational business.

While some dispensary owners have talked about selling both medical and recreational marijuana in the same space, Price plans to turn the building into a two-store operation. In a second-story room, now empty except for a few sofas and a brass pole once used by firefighters – he would offer recreational-marijuana products. On the ground floor, he would continue to sell untaxed medical marijuana to patients who must show their state registration cards to gain entrance. "That way, our patients can still get taken care of in the manner they have become accustomed to, and not feel like we've turned our backs on them," Price said. 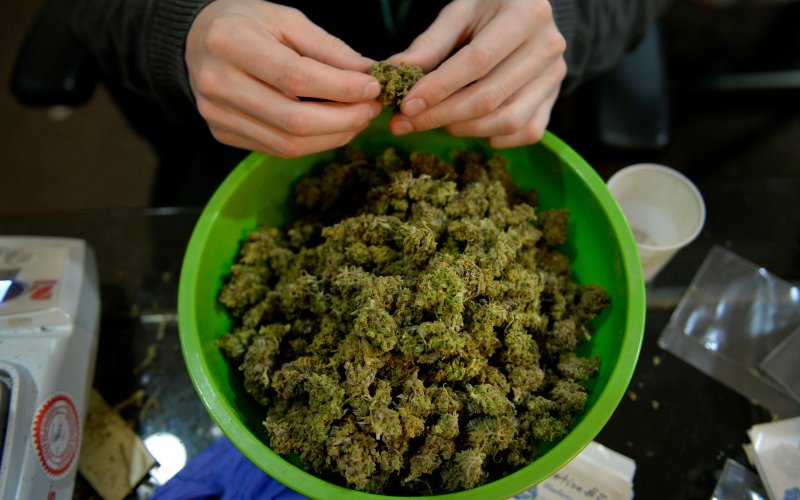 The General said:
One study by EcoNorthwest for initiative proponents projects that the state’s recreational marijuana could sell for $145 an ounce
Click to expand...

I really like the sound of this initiative. I've been looking to move to either OR or WA by the end of the year, so if this passes it might make my decision a no-brainer. By the way, the price for an ounce in OR would be cheap by medical dispensary standards, let alone by recreational retail. A gram of recreational flowers in WA goes for around $35, it's pretty disgusting. The amount of taxes make it so wrong on so many levels. It's not exactly something that I'd be willing to support. Hopefully people put their heads on straight in November before voting.

The illegality of Cannabis is outrageous, an impediment to full utilization of a drug which helps produce the serenity and insight, sensitivity and fellowship so desperately needed in this increasingly mad and dangerous world.