Hi, Welcome to my 2nd grow. It will be a completely organic grow in my super soil I cooked up. I'm still new to all of this so any help would be greatly appreciated.

Had a problem with fungus gnats in the super soil while it was growing so I added more DE to the top layer. That didn't seem to work so I added so mosquito bits (BTI) and beneficial nematodes. That seems to have knocked out most of the fungus gnats.

I built this grow box out of an old TV cabinet I found. I converted it to a 38"22"x58" closet. I installed a Mars II 900w LED from top led, a mini 7 1/2" oscillating fan and a 4" hurricane exhaust fan w/ 8x16"carbon filter kit from growtents.com, and a 4' LED tri band full spectrum strip light for a side light. I cut a 20"x12" hole at the bottom and installed a HEPA a/c air filter to filter incoming air. I have a digital temp and humidity gauge I picked up at a local pet store. I had a bit of a temperature issue so I modified the LED so that I could vent the heat from it right out of box. The current temps are a high of 85F and a low of 74F with humidity ranging from 40%-70%. I know the temp is still a little high, I still have to drop an A/C duct from the ceiling behind the box which should help drop it a couple

The strains I will be growing are:

• A cross between a Blueberry F3, Blue Moonshine and a potent Kush/Thai Indica hybrid that has achieved truly legendary status in the USA; OG Kush.
• Its short, very compact stature and very vigorous growth stage make it perfectly adaptable to any size grow room and growing method.
• High resin production begins a few weeks after the start of flowering and, when dried properly, the buds acquire a delicious red berry taste with citrusy hints. This makes it one of the best strains for hash and oil extraction as the results are abundant and the taste and aroma, sublime.
• At almost never more than 8 weeks, flowering is quick, making it also highly suited for outdoor growing in climes that require early cropping.
• Type: Mostly Indica
Flowering: Photoperiod
Height: Medium
Area: Indoor & Outdoor
Genetics: Blue Moonshine x OG Kush

• For a remarkable indoor harvest of up to 600g per square meter under a 600-watt high-pressure sodium light you won’t do better than Jacky White.-
The hardiness also means an even better yield when grown outside as you would expect but you must have a moderate to sunny climate.-
Jacky White is a Sativa dominant hybrid which means that she grows like a Sativa although she has also retained the best of the Indica’s virtues including a fast finish and an easy to grow plant. This ancestry also means that Jacky White will give you a Sativa stone mixed with a bit of Indica to smooth out the speed of a pure Sativa high – lucid and cerebral with a lovely body buzz, the stone lasts.-
Stability, high yield, fast finish and stability are all great attributed belonging to Jacky White and when the plants grow you will find that there are only slight variations amongst them. The plants also like to branch so will do best in a set up that allows for extra space for side branch development. You can also try bending or pruning to increase the yield and for the full flowering time Jacky White will give off a scent of grapefruit so that’s sixty days of scent plus loads of stocky colas that glitterwith resin. Add to all that the luxurious haze-citrus taste and there’s nothing more you could add to this wonderful smoke.-
• Type: Sativa/Indica (75/25)
Flowering time: 60 days indoors. Outdoors, middle of October (n.L.)
Yield: 500+ grams per m2 indoors. Outdoors 600+ grams per plant
Environment: Indoors. Outdoors between 50 n.L. and 50 s.L.
Effect /Buzz: Soft cerebral pleasant
Smell/Taste: Grapefruit
THC: 15-18%

Both were purchased from The Single Seed Center

I want to thank you for stopping by and checking out my grow. I will post some progress pics and info in the next day or two so stop back by and check it out.
Last edited: Jul 21, 2014
B

Ok so I was transferring my super soil to the 3 gallon pots I will be growing in and noticed it still had some fungus gnats in it, even though I had let the soil dry out. So I watered in some more BTI and sprinkled more DE on top and put up some yellow sticky cards. Hopefully this does the trick because I don't want to transplant into my super soil until I know I got rid of them. Also I noticed some really tiny white bugs in the soil. There are a few that just crawl around the soil and if you try to touch them they end up jumping away a few inches.
Anyone have any ideas what these could be? 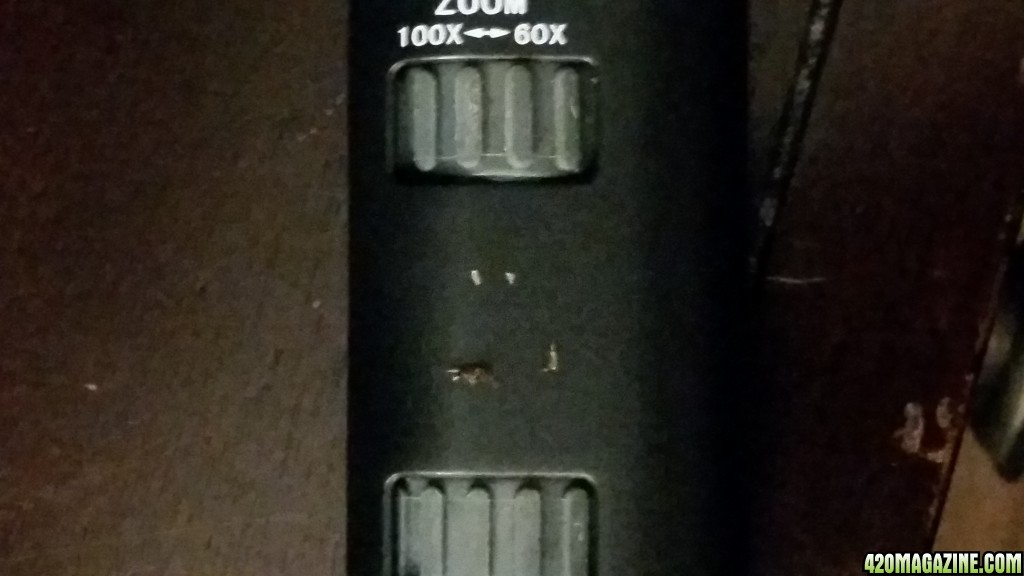 They are the 2 little white specs on the right side of the microscope. For size comparison the medium sized bug is a fungus gnat. the bigger bug is a flying ant. 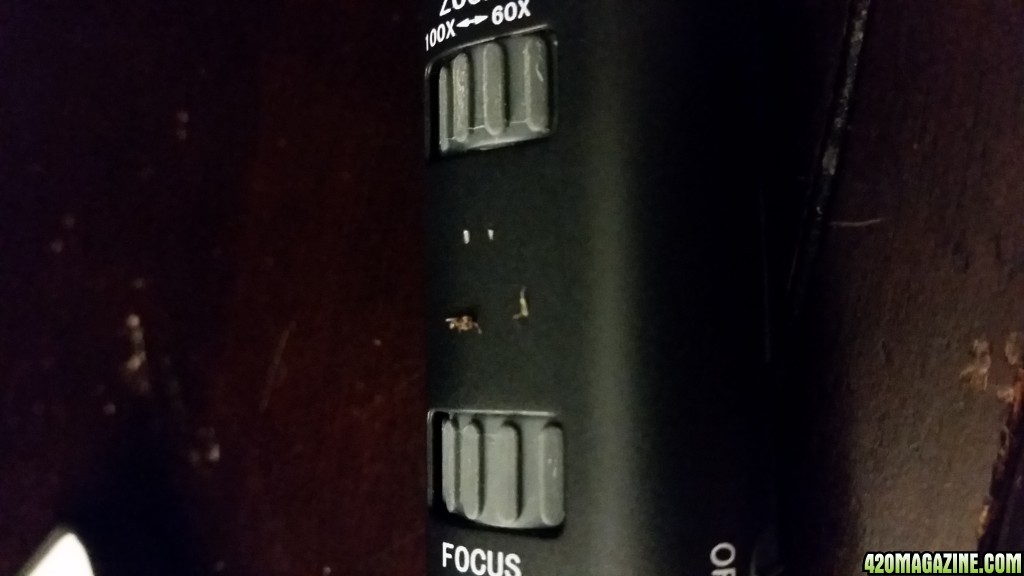 update on what I have done so far from germinating to current:
7/5: germinated seeds I using paper towel method 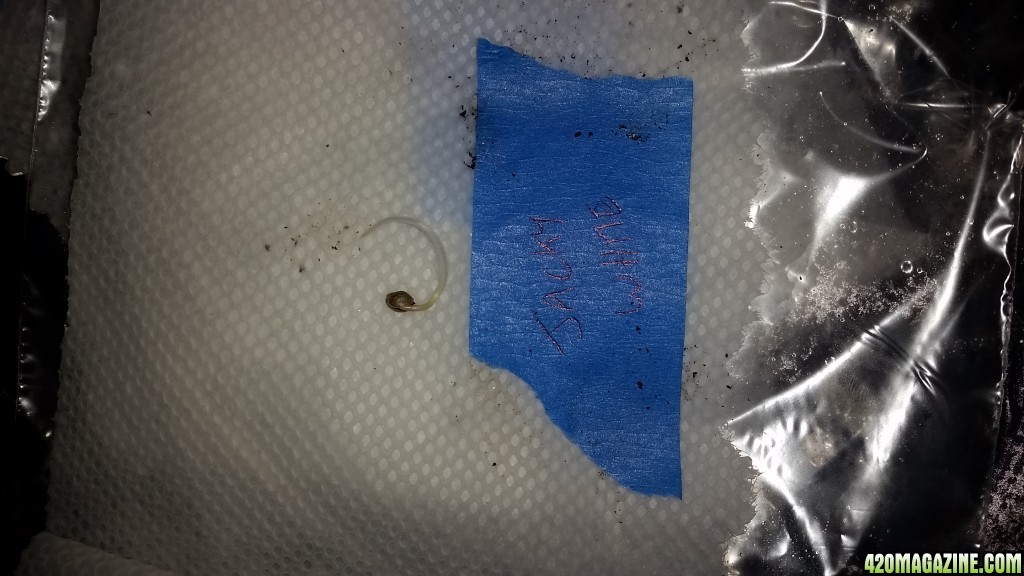 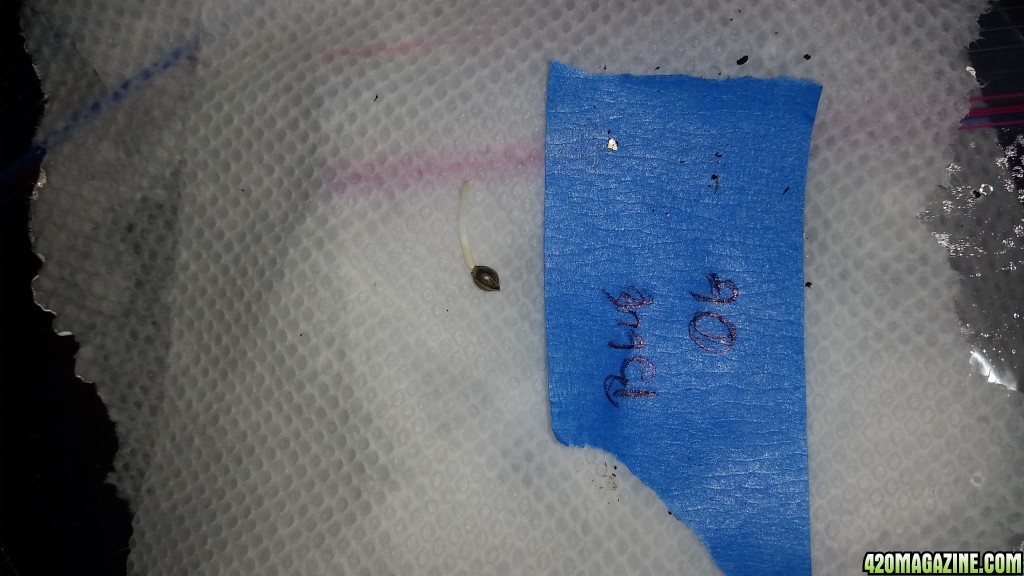 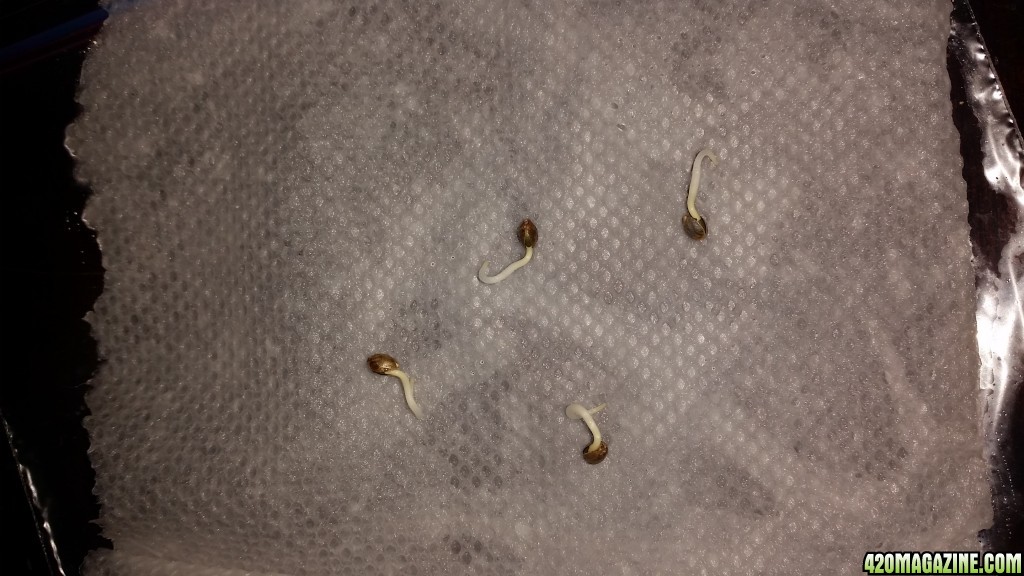 7/7: seeds sprouted and transplanted to mushroom compost in jiffy cups
placed in under humidity dome with 4 LED strip light. Temp 77-79 with 80-90% humidity.
7/8: The Purps(p1, p2, p4), Jacky White(JW) sprouted cyto leaves.
7/8: Set light schedule to 18/6, lights out from 10:30-4:30pm during hottest part of the day
7/9: P3 and Blue OG(BG) sprouted. moved seedlings closer to light to prevent stretching.
7/10: took out of humidity dome and put cup of water in to raise humidity to prevent shock from coming out of dome.
7/13: transplanted into plastic solo cups, due to light mold/fungus starting to form on outside of jiffy cups(those are garbage, I will never use those again) 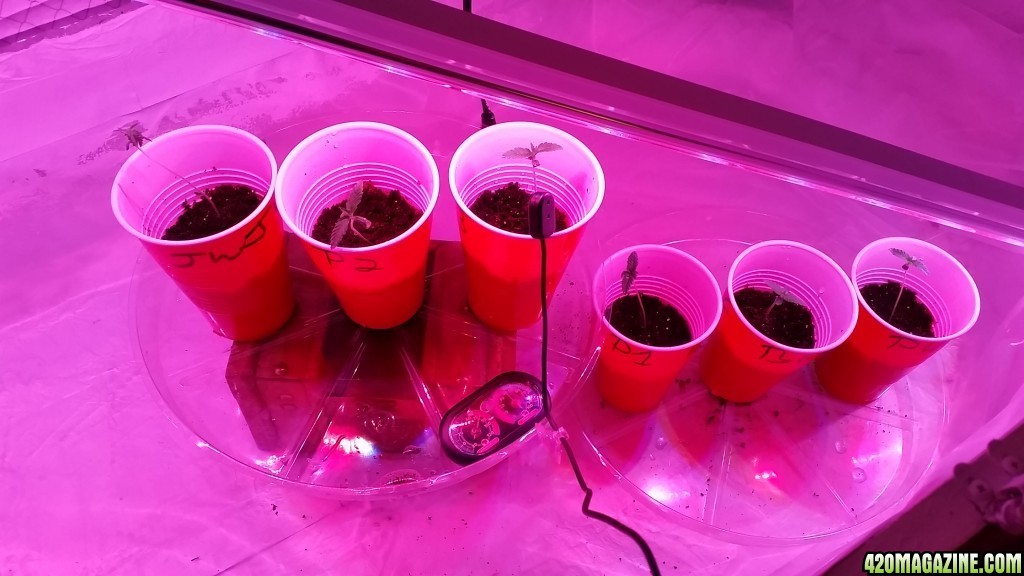 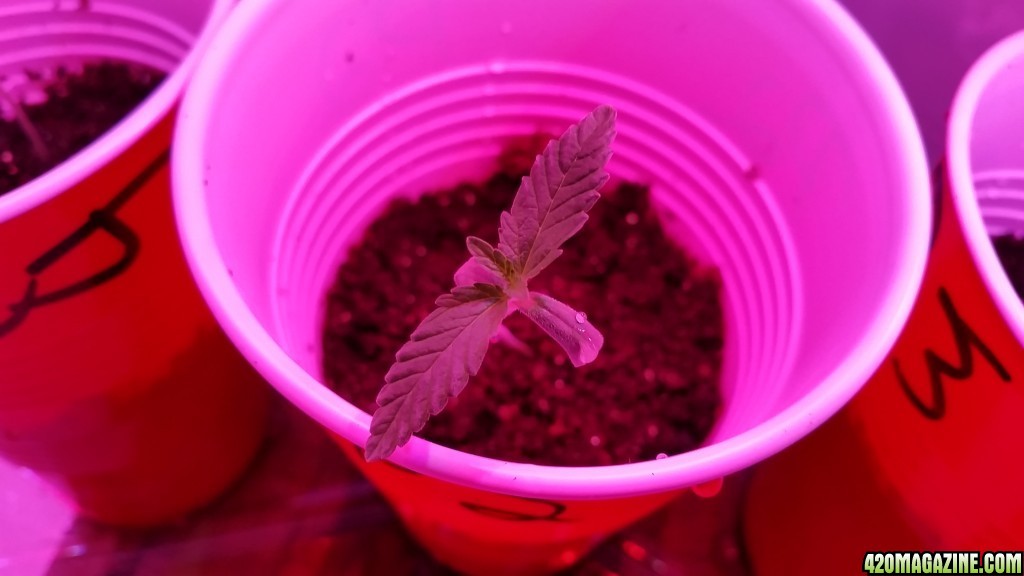 7/16: lightly watered seedlings
7/17-7/20: light schedule got messed up due to timer going bad. lights were on for 24 hours for 3 days, then switched back to regular 18/6 schedule. I hope this does not cause problems.
7/21: JW, P2, P4 are not standing up straight, the fall over to the side when misted or just not standing up at all. supported them upright.
7/21: watered seedlings in the morning.
T

When u cooked your soil what kind of container did u use? Was it covered or uncovered?
https://www.420magazine.com/forums/journals-progress/228748-dkellz86-super-soil-top-led-mars-2-1200w-4x4-tent-cookies-cream-blue-lavender-g.html#post2236597Dkellz86 Mars 2 1200w supersoil cookies & cream and blue lavender grow journal