The younger generation is blowing away the smoke screen used to incite the public's disapproval of marijuana.

The New Mexico Medical Marijuana and Natural Healing Expo is the brainchild of Aaron Kushmor and Ben Marshall III. The plant's natural healing benefits, Marshall said, are among its thousands of discovered uses.

"Hemp essentially could replace all paper needs, even protein," he said. "They're the best proteins for your body and easier to digest. Honestly, the applications go on. ... We're the 48th poorest state in the nation. Why not create some new jobs, give this industry a real chance here, really make it work and make some money? We all feel this industry could actually do that for this state."

The three-day event looks to educate the public about medical marijuana, Kushmor said. He said, for example, the government replaced the term "cannabis" with the Spanish term "marijuana" to give it a negative connotation.

Historically it was the byproduct, hemp, that threatened industries like steel and paper, he said, and eventually threatened the medical industry. He said that resulted in marijuana's inclusion in Schedule I drugs category, which means its one of the most heavily penalized drugs in the government drug-rating system.

"It's all about natural healing, and the pharmaceutical (companies) don't want us to know about that because it's cheap – you can grow it in your closet or backyard, and you can heal yourself," Kushmor said. "Why take the other drugs that the pharmaceutical drug companies are pushing on us that kill thousands of people every year? How many people does marijuana kill? Zero."

Now that the baby boomers are retiring, information about marijuana is being dispersed more widely, especially among younger generations, Kushmor said. It resulted in a spike in program participants, he said. Marshall said it is difficult for New Mexico producers to meet the high demand, but New Mexico is exercising caution to avoid negative propaganda associated with just "opening the floodgates."

"They're taking their time because they're trying to do it right, not fast," Marshall said. "California and Colorado, they did it fast. Now they're getting hit hard from the federal standpoint, DEA and FBI. So we are doing it right. It is a bit slower, but we might as well do it right the first time."

The expo includes day seminars with lawyers, doctors and growers.

If they break even, all proceeds will go toward next year's expo and the Medical Marijuana New Mexico Journal, Marshall said, which is New Mexico's first medical cannabis and natural healing lifestyle journal. The first issue will be an insert in the Weekly Alibi the week of July 27. 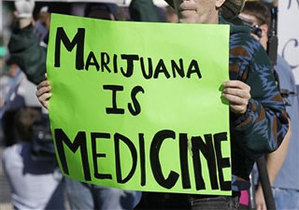