You don't know me, but I've been lurking around here and other places reading up on all your good advice and recommendations .. I have of course forgot and/or ignored all of it since and instead chosen to lean by doing, but that's just how I work unfortunately.

Figured I need a grow log, so also figured that it might be fun to do it here where I'm also able to get all of you lovely peoples comments and suggestions! I haven't tried growing (anything) before so this will most likely end in tears and wasted seeds.

Germinating 10 original autoflowering lowryders (nonsexed) and also threw in some basil because, well, I love basil... cheese melt with basil on toast mmmmmm

.. the basil will move to the window shelf once they get going ... if they get that far, and that will be the last you hear of those, I promise ;-) ...

Actually fun little side note: I read on a seed banks homepage that growing Coriander will keep away spidermites, can anyone confirm that? .. I'll throw in a couple of those anyway just to try it out.

Currently in the process of creating my little grow-closet, but due to budget constraints I'm going to have to take it one step at a time. Got basic lights, as is evident, but planning on at least two more.


So yeah all things considered, pretty rough start but well.. cannabis is a weed after all.. it can handle it!

Considering using an odor neutralizer instead of an inline fan with a carbon filter.. much less noisy, less power.. but sure, have to refill the liquid thingy... just not sure how well they work, so if anyone have any experience with these things let me know! (looking at this one just called neutralizer.. or 'The Neutralizer' made specifically for cannabis growers, they claim it works! .. almost as if by magic... well it's science! (insert Jesse Pinkman bitch line here))

Well that's it for now, not super interesting this time around, sorry about that, but I'll report back once I see some progress... or once I don't, either way. 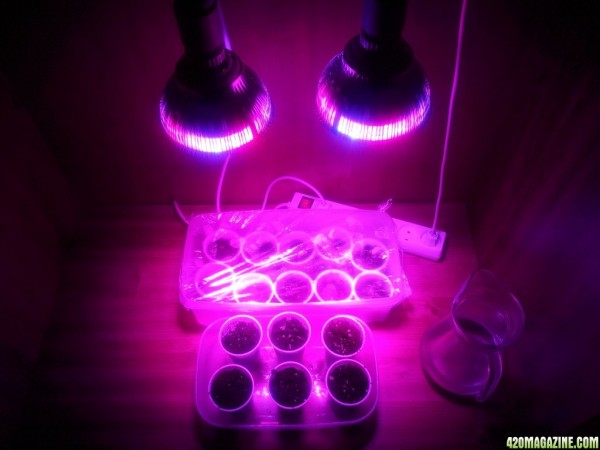 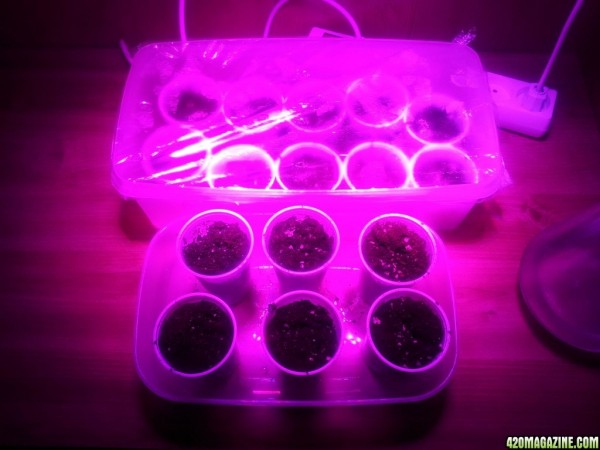 Too soggy.. I think I made the soil too soggy, so rescued the seeds I could find (apparently some got eaten by a swamp creature ... living in my closet) and replanted in new soil, and only sprayed lightly for now... none of the seeds where showing signs of opening up yet, so we'll see if they're even viable.
S

Yay! most of my second batch of seeds germinated with the 'wet paper towel' method: 7 out of the 10 lowryders got little white tails, so planted them in cups... leaving the remaning 3 seeds under the towel, they may just be late bloomers... sprouters... so to speak...

The first batch that I planted directly into soil still haven't shown themselves, but it's only day 3ish for those anyway. Patience is an aquired taste

Ordered some Sibirian Motherwort as a second (or third'ish) grow project. I'm going to try growing those and making herb cig's out of the buds. Might also use it as filler material for smoking keef/hashish, instead of regular tobacco... coz it might taste like crap, so I guess I'll see :24:
S

Day 5'ish and I got some definite grow-action going on! ... even the basil has emerged! ah well..

Once I determine gender I'll have to transplant them, which autos apparently don't like. So don't think I'll be mass-seeding again like I did this time, instead I'll go for a more continuous grow kind of thing and determine gender on-the-fly, keeping 4 plants active at a time, or something like that. 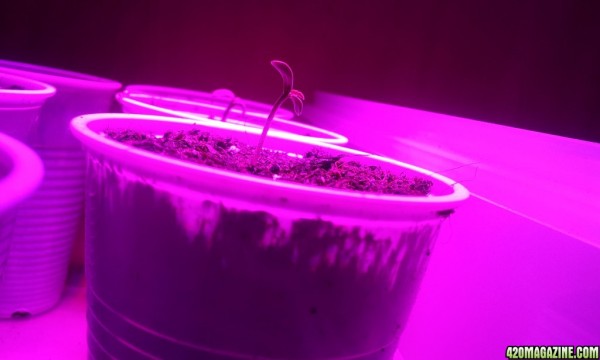 Hi Serious, are you still in gro mode? If so hope it is goin' good! What light schedule have you implemented during veg and what are you planning for flower?
Hope all is good in N.Europe! I lived in Hamburg for two years back in the day and loved it. Cheers!
December 2014 First Journal Indoor Auto Gro
https://www.420magazine.com/forums/...317-colorfuldayze-aug-dec-2014-auto-grow.html

Is your grow still alive?