Out of the Closet

I remember when the internet began, it was all about user anonymity. And while that's still the case, more and more people are coming out of the closet, using their real names as they travel the web. After all, the web is not virtual reality -- it's really just a communication platform.

Having more than one handle is beneficial for truck drivers using CBs, schizophrenics, and those interested in obfuscation -- none of which describe me. In fact, I've started using my real name on other web forums. Why?

Pain patients all over the world are discovering the treatment possibilities of cannabis. We are a very large patient population, and yet we have almost no voice at all in the political realm. And it seems to me that using our real names -- coming out of the closet -- could give our cause more power and credibility.

What are pain patients hiding from? Do cancer patients hide? And just because I don't have cancer, does that mean I'm not in pain? Because I'm also tired of all the discrimination in treating pain based on a patient's medical condition.

Does using a pseudonym offer any benefits or protection? I'm not sure, but it seems like using your real name can offer some benefits and protection, too.

So, let me introduce myself: My name is Johnna Stahl, I'm from Texas, but now I live in Albuquerque, New Mexico. I've suffered from intractable pain for about 30 years. After switching from prescription medications to medical cannabis, I joined this forum to learn more about this amazing plant and this new industry.

Hi, it's nice to meet ya'll

I am glad you are proud of who you are and what you are doing. I believe half of our battle to legalize starts with us not hiding what we are doing, but at the same time, sharing your name and where abouts on the internet can cause multiple problems. If you are in a legal state to consume that is great, if not you just opened the door for police, and police aside, if you are growing, some people on the internet are not honest people and may break into your house knowing who and where you are and what you are up to.... All of that aside though, glad to meet you. (sorry, can't give my name. I am not legal to smoke where I am, and I am just helping my sick dad grow his meds(he is legal))
https://www.420magazine.com/forums/journals-progress/224301-go4snypr-hydro-grow.html

I appreciate your concerns, go4snypr, but I'm not a grower. And as I said, I live in New Mexico, a state with a medical marijuana program. Unfortunately, I can't afford the program right now and am saving up to move to Colorado.

And because I'm on Social Security Disability, there isn't a government agency that doesn't have my name. Heck, just because I purchase allergy medicine, I'm on some DEA list through my driver's license number.

I suppose that some stranger on the internet could find me, or some stranger could follow me home from Walgreens. I suppose everyone has something that is worth stealing for somebody else, but I can't imagine some stranger wanting what I have, which is very little. Basically, the only thing I have worth anything is knowledge -- and I give that away for free.

I don't expect anyone else to come out of the closet -- and I hope your dad feels better soon. Thanks for responding.
G

Its too bad that you have to move to get meds it is an unfortunate system that has been developed for it. Hopefully if you move to Colorado you will be able to grow your own for a fraction of the cost. As for someone finding you thru the interne or from walgreens you do have a point, not a very high chance of things like that happening. As for my dad, he will probably never feel better. He has a disease called Acromegaly and he figures it took the doctors over 30 years to diagnose it. He has been living with a tumor in his head since his early 20's he figures and it has done a lot of damage to his body in last 30-35 years. Some days are better than others, but at least he is still on this side of the dirt...hope you can get things sorted out on your end as well. Props to you!! cheers.
https://www.420magazine.com/forums/journals-progress/224301-go4snypr-hydro-grow.html

Not surprisingly, Americans feel that their privacy is being threatened on all sides, according to a new survey by the Pew Research Center that found consumers fearing for the security of their personal information and their ability to retain confidentiality.

Perhaps most striking is Americans’ lack of confidence that they have control over their personal information. That pervasive concern applies to everyday communications channels and to the collectors of their information — both in the government and in corporations. For example:

91% of adults in the survey “agree” or “strongly agree” that consumers have lost control over how personal information is collected and used by companies.
88% of adults “agree” or “strongly agree” that it would be very difficult to remove inaccurate information about them online.
80% of those who use social networking sites say they are concerned about third parties like advertisers or businesses accessing the data they share on these sites.
70% of social networking site users say that they are at least somewhat concerned about the government accessing some of the information they share on social networking sites without their knowledge.
Yet, even as Americans express concern about government access to their data, they feel that government could do more to regulate what advertisers do with their personal information:

80% of adults “agree” or “strongly agree” that Americans should be concerned about the government’s monitoring of phone calls and internet communications. Just 18% “disagree” or “strongly disagree” with that notion.
64% believe the government should do more to regulate advertisers, compared with 34% who think the government should not get more involved.
Only 36% “agree” or “strongly agree” with the statement: “It is a good thing for society if people believe that someone is keeping an eye on the things that they do online.”
Online services
When it comes to more commercial considerations, consumers are skeptical about the supposed benefits of personal data sharing, but are willing to make tradeoffs in certain circumstances when their sharing of information provides access to free services.

61% of adults “disagree” or “strongly disagree” with the statement: “I appreciate that online services are more efficient because of the increased access they have to my personal data.”
At the same time, 55% “agree” or “strongly agree” with the statement: “I am willing to share some information about myself with companies in order to use online services for free.”
The public feels most secure using landline phones, least secure on social media. 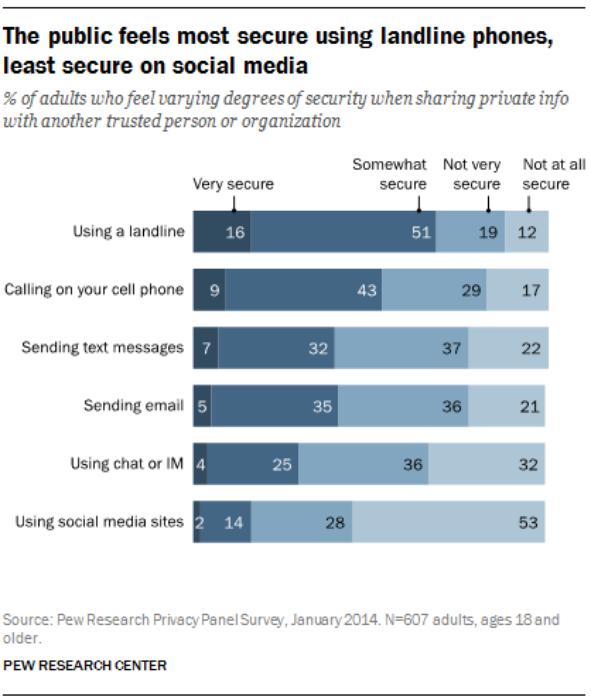 Across the board, there is a universal lack of confidence among adults in the security of everyday communications channels — particularly when it comes to the use of online tools.

Most say they want to do more to protect their privacy, but many believe it is not possible to be anonymous online.

Jennifer Abel has worked as a reporter and editor for local newspapers in Connecticut. She contributes to online publications including Playboy, the Guardian, Anorak, Daily Dot, Salon and Mashable.

T
Coming Out Of The (Cannabis) Closet